1,000-LIGHT-YEAR "BUBBLE" IS THE SOURCE OF ALL NEARBY BABY STARS

Death begets life in the space between stars. 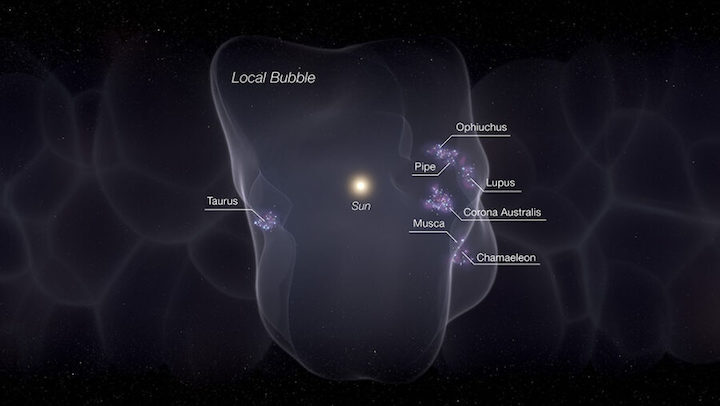 An artist's illustration shows the Local Bubble, with star formation occurring on the bubble's surface. Scientists have now shown how a chain of events beginning 14 million years ago with a set of powerful supernovae led to the creation of the vast bubble, responsible for the formation of all young stars within 650 light-years of the Sun and Earth. (Note that there are no star-formation regions at top and bottom, possibly because the Local Bubble is more like a "galactic chimney," venting stellar gases out of the galactic plane.)
CfA / Leah Hustak (STScI)

Beginning some 14 million years ago, more than a dozen stars near the Sun have ended their lives as spectacular supernovae. These ongoing blasts have driven a shock wave that has swept up intervening dust and gas, which in turn has created nurseries for stellar newborns along the edges of the expanding, 1,000-light-year-wide shell. The Sun, which was about 1,000 light-years away from the supernovae when all this began, entered the shell 5 million years ago and now sits near its center.

This is the picture Catherine Zucker (Harvard University and Space Telescope Science Institute) and colleagues have painted in a study appearing January 12th in Nature.

They’re expanding on a well-studied explanation for the Local Bubble, a cavity of sparse, hot gas around the Sun. For the past four decades, astronomers have been making the case that supernovae blew out this bubble. Now, Zucker’s team has used data from the European Space Agency’s Gaia satellite to explore the exact positions, shapes, and motions of gas and stars within 650 light-years of the Sun.

When they plugged all of that data into visualization software during a team Zoom one day, their reactions ranged from elated to astonished: They had found that almost all the stellar nurseries near the Sun — the Ophiuchus, Lupus, Pipe, Chameleon, and Musca star-forming regions, the Corona Australis region, and the Taurus Molecular Cloud — lie on the hilly surface of the Local Bubble. There are older stars within the bubble, but essentially zero stars that are younger than 50 million years, Zucker says.

That’s because the shock wave that the supernovae powered would have compressed gas as it swept it up, igniting new waves of star formation along the bubble’s edges. Based on measurements of the dust on the shell’s surface today, the astronomers estimate that the shock wave has gathered more than a million Suns’ worth of dust.

“The data and their interpretation give strong support to the idea of triggered star formation in the Local Bubble shell,” says Dieter Breitschwerdt (Berlin Institute of Technology), who was not involved in this study.

Massive stars live fast and die young, going supernova after just a few tens of millions of years at most. But they’re born with smaller siblings that live much longer. So whatever clusters bore those massive stars are still around.

By tracking the 3D motions of star clusters on the shell of the Local Bubble, Zucker and colleagues could trace their motions backward in time to determine the Local Bubble’s origin in time and space. They identify two clusters, Upper Centaurus Lupus and Lower Centaurus Crux, as the likely source of the initial supernovae, which occurred between 13.6 million and 15.1 million years ago, confirming previous findings.

The clusters themselves were born 15 to 16 million years ago about 50 light-years apart. Based on all the stars they have now, they could have had enough massive stars between the two of them to host between 14 and 20 supernovae. That’s roughly consistent with the number of stellar blasts needed to blow out the Local Bubble.

The age is remarkably consistent with the abundance of an iron isotope found on ocean floors, says Breitschwerdt, who has studied this deep-sea record. The isotope, iron-60, decays with a half-life of 2.6 million years, and sediments in the oceanic crust record a history of iron-60’s fluctuations over millions of years. Breitschwerdt and colleagues pinned an iron-60 spike that occurred about 2 million years ago on two supernovae, both roughly 300 light-years away when they occurred.

Speaking at an American Astronomical Society press conference, Zucker agreed that the Local Bubble can’t explain the entire iron-60 record. But the fact that the Sun happens to sit near the center of a bubble probably means these structures are everywhere, with thousands of them littering the Milky Way.

The bubbles might even be bumping into each other. The only young-star grouping that the team found inside the Local Bubble — the Perseus molecular cloud — seems to sit on the edge of a different bubble, the Perseus-Taurus Shell recently discovered by the same team.

“Now the sun just sits by chance in the center of the bubble,” she adds, “and we get this front-row seat to star formation happening all around us.”