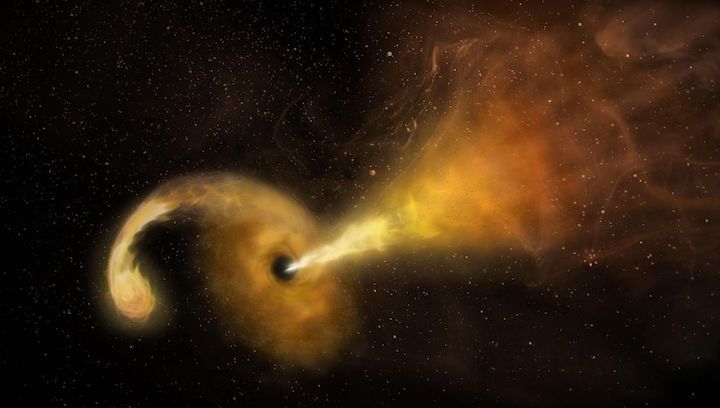 An artist's depiction of a black hole eating a star, also known as a tidal disruption event, and producing a superfast jet. (Image credit: NRAO/AUI/NSF/NASA)

Astronomers have found evidence of a black hole snacking on a star in data gathered back in the 1980s, according to new research.

The researchers say that they have identified the signature of such an event in data gathered during the 1980s, thanks to a pair of high school interns from Massachusetts. When a star comes too close to a black hole, the massive object's gravity tugs at the star, pulling matter into the black hole and producing a burst of light in what astronomers dub a tidal disruption event. And while astronomers have seen this phenomenon occur about 100 times, very few of those sightings rely on radio observations, as the 1980s event does.

"Gravity around the black hole will shred these unlucky stars, causing them to be squeezed into thin streams and fall into the black hole," Vikram Ravi, an astronomer at the California Institute of Technology (Caltech) in Pasadena, said in a statement. "This is a really messy process. The stars don't go quietly!"

Ravi and a team of scientists discovered the signature of a tidal disruption event in archival observations flagged by interns Ginevra Zaccagnini and Jackson Codd. The teens were reviewing data gathered by the National Radio Astronomy Observatory's (NRAO's) Karl G. Jansky Very Large Array (VLA) in New Mexico and noticed that a particularly bright signal seen in the mid-1990s had faded by 2017.

The team began looking for other observations of the object, dubbed J1533+2727, and found that the Green Bank Observatory's 300-foot (90 meters) radio telescope had spotted the same object before its sudden collapse in 1988. In fact, Green Bank's observations from 1986 and 1987 showed the object appearing even brighter than in the 1990s data the researchers had started with. All told, the researchers said, the object is now 500 times dimmer than it was at its brightest.

In their analysis of the event, the scientists concluded that the bright flash was likely caused by a supermassive black hole 500 million light-years away from Earth, which crushed a star and spat out a radio jet.

The researchers hope that the event and others like it will help them better understand tidal disruption events (also called TDEs), the black holes that cause them and the galaxies in which these black holes reside.

"Interestingly, neither of the radio-discovered candidates were found in the type of galaxy most popular for TDEs," Hannah Dykaar, a PhD student in the department of astronomy and astrophysics at the University of Toronto and a co-author on the new research, said in the same statement. "Finding more of these radio TDEs could help us to illuminate ongoing mysteries about what types of galaxies they occur in and just how many there are in the universe."

The scientists have also turned to another program, the Zwicky Transient Facility (ZTF) at Caltech's Palomar Observatory, in hopes of spotting more tidal disruption events producing blasts of radio waves.

"This is the first discovery of a relativistic TDE candidate in the relatively nearby universe, showing that these radio-bright TDEs may be more common than we thought before," Ravi said.

The results were presented on Monday (Jan. 10) in conjunction with the 239th meeting of the American Astronomical Society, which was canceled due to COVID-19. A paper describing the research has been accepted for publication in The Astrophysical Journal and is posted to the pre-print server arXiv.org.