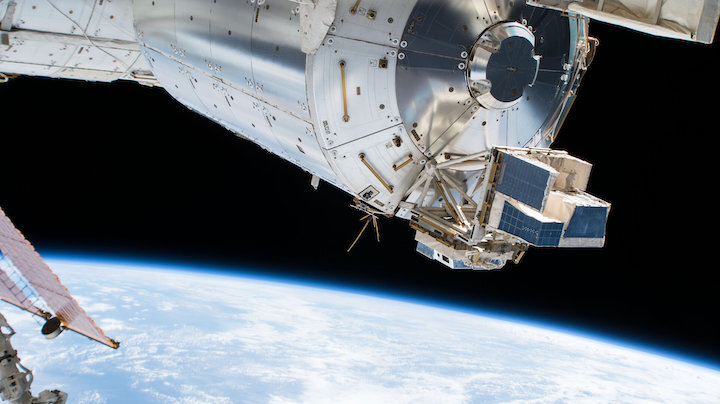 The Atmosphere–Space Interactions Monitor, or ASIM for short, is a first-of-its-kind complement of instruments on the International Space Station. Dubbed the ‘space storm hunter’, ASIM measures electric events in Earth’s upper atmosphere with cameras, photometers and X- and gamma-ray detectors.

Recently, ASIM unexpectedly detected a unique gamma-ray burst from outer space. This fortuitous observation was published in Nature magazine, less than a year after ASIM made a cover story.

It came from outer space

Mounted outside the Columbus module and designed to look downwards for electrical discharges born in stormy weather conditions in Earth’s upper atmosphere, ASIM recently detected another peculiar phenomenon: a burst of photon radiation coming from another galaxy.

The spurt turned out to be from an explosive flare from a magnetar located 10 million light-years away in a distant galaxy. Magnetars are a special type of neutron star – the collapsed core of what was once a supergiant star.

Neutron stars spin very fast. The magnetic field of magnetars, however, is believed to be so powerful that it slows down the spin, tearing at the star’s crust and producing powerful bursts of radiation, x-ray and gamma-rays in particular.

Thanks to its design and performance, ASIM was able to record this gamma-ray photon outburst at extremely high speeds.

The measurements revealed unexpected, periodic “flickering” of the photon burst that will help to shed light on the physics of magnetars and the structure of neutron stars in general, one of the hottest topics in current research. The results were published in the December issue of Nature magazine.

Since its launch in 2018, ASIM has been keeping researchers busy. From its vantage point outside the International Space Station, ASIM has provided tons of data on ‘transient luminous events’ sporting names like blue jets and red sprites taking place above thunderstorms in the upper atmosphere.

Aside from being a little-understood phenomenon and part of our world, these powerful electrical charges can reach into the stratosphere and above and change the chemical composition of the atmosphere with implications for the atmospheric radiation balance. The findings may help to make climate models more accurate.

Researchers are investigating the relationship between terrestrial gamma-ray bursts, lightning and high-altitude electric discharges across all seasons, across our world and at different times of day and night. Learn more about ASIM’s mission in this handy infographic.

This week ASIM was moved to another spot outside the Space Station to gracefully make place for an American technology demonstration payload. The move was carried out by the Station’s robotic arm.

From its new vantage point, just next to its current one, ASIM is pointing in a different direction, slightly more towards the horizon instead of straight down. This will help researchers work out how much our atmosphere influences the processes of electrical discharges. It’s like viewing a firework display from the side: one can enjoy the shapes more than if one is just below the display.

ASIM was built by Danish company Terma, Danish Technical University, University of Bergen in Norway and the University of Valencia in Spain for the European Space Agency.