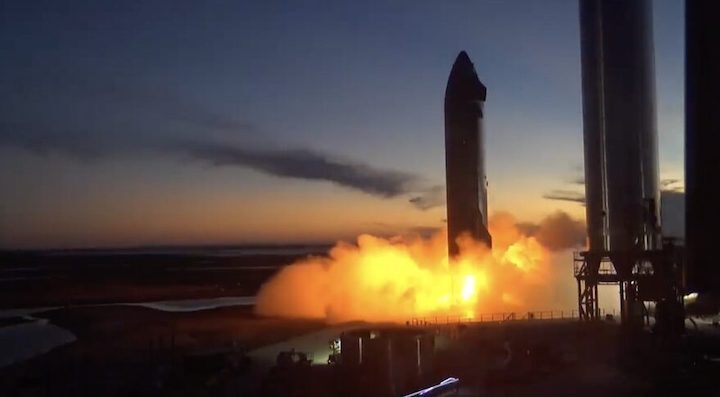 TAMPA, Fla. — SpaceX has dropped a plan to use Falcon 9 to launch the 30,000 satellites in its proposed second-generation Starlink broadband constellation, and is instead focusing on a configuration leveraging its upcoming Starship vehicle.

The decision follows development progress that SpaceX said exceeded the company’s expectations and means it could start “launching the Gen2 system as early as March 2022,” SpaceX lawyer William Wiltshire said in a Jan. 7 letter to the Federal Communications Commission.

Starship missions are subject to a favorable environmental review into SpaceX’s launch facility at Boca Chica, Texas, which the Federal Aviation Administration expects to complete Feb. 28.

SpaceX currently has FCC approval to deploy 4,408 satellites to low Earth orbit at an altitude of around 550 kilometers, and has launched more than half of them to date. The FCC has not yet approved SpaceX’s plans for the larger, second-generation constellation. SpaceX asked the FCC to expedite approval now that it has settled on the Starship-launched configuration.

“Just as terrestrial wireless networks meet customer demands by operating more than one generation of technology simultaneously, SpaceX plans to use both of its networks to provide superior service,” Wiltshire wrote.

“SpaceX will continue to maintain its first-generation system, launching replacement satellites as appropriate to sustain the orbits in which it operates, even as it conducts the initial deployment of the Gen2 system. To be clear, operating both systems simultaneously does not mean that SpaceX will necessarily operate all of the satellites under its authorizations at all times in all areas.”

He said a “SpaceX customer user terminal will be able to receive service from satellites of either system.”

In August, the company proposed two configurations for a follow-on network it originally submitted to the FCC in 2020, with both options designed to spread satellites more evenly across nine to 12 inclined orbits for denser and more consistent coverage — without needing additional spectrum or spacecraft.

The proposed Starship configuration, which SpaceX had earlier said was its preferred option, comprises 29,988 satellites at altitudes of between 340 and 614 kilometers across nine inclined orbits.

The now-abandoned Falcon 9 configuration would have spread 29,996 satellites across 12 orbital inclinations, at altitudes between 328 and 614 kilometers.

Amazon and other SpaceX rivals had called on the FCC to dismiss the amended plan, saying requesting permission for more than one configuration encourages speculative application behavior from future constellation operators.

Starlink availability grows but not without bumps in the road

As Starlink launches and satellites have become staples for space industry observers, it’s easy to forget that the point of the enterprise is the provision of Internet services. While it’s still in beta, people are using Starlink for their Internet service provider right now. So how is it to use Starlink now? Where is it available? And can you even get it?

One big limit to Starlink availability isn’t governmental or geographical restrictions: it’s just getting a Starlink kit in the first place. Demand massively outstrips supply: SpaceX have 145,000 users, but have had more than half a million orders, and even people in serviced areas are waiting months for the kits to arrive. That is partially owing to the supply of dishes — with the first dish design affectionately called “Dishy McFlatface” by fans — but also due to the amount of satellites and ground stations. Each satellite can only handle so much data, and needs to relay signals to SpaceX ground stations as well. If there are too many people in an area, it won’t work.

(This is one major reason why Starlink isn’t intended for dense urban areas, and while the upcoming second generation of Starlink satellites will be able to alleviate these issues, it won’t eliminate them.)

As Starlink is still in beta, its coverage is limited. According to the email that SpaceQ received from Starlink last April, “Starlink now offers limited beta service in Canada, U.K., Germany and New Zealand.” Things have expanded since then — there are Starlink beta users in 24 countries now.

Geographical limitations are real but changing. Until recently, Starlink was generally limited to users in Northern latitudes between 33.6° and 54.9°, according to the Starlink subreddit’s availability thread. This coverage seems to be improving, however, as users in places like Texas and Florida are starting to confirm their orders are either shipping or arriving. In the southern hemisphere Starlink is available in Australia, New Zealand and Chile. 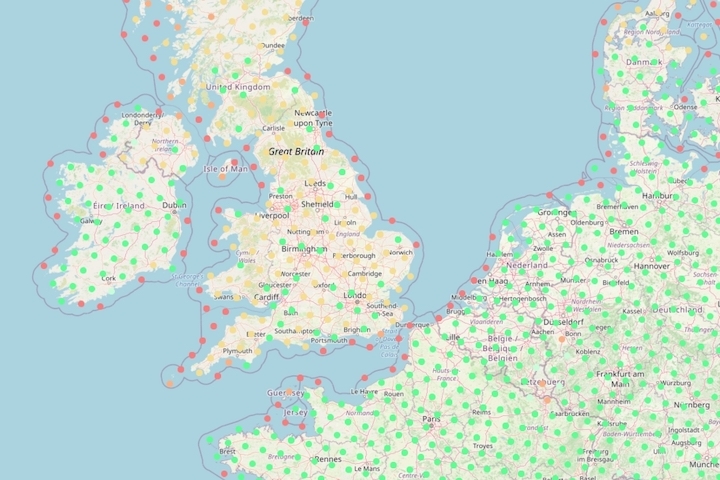 Map (partial) of nodes and when they are likely to come online.Credit: reddit user a13xch1.

Politics and governmental processes still do have an impact. Even leaving aside SpaceX’s need to work with the FCC on expanding their constellation, and the tension with China over the Chinese Space Station having to move to avoid Starlink satellites, there’s no guarantee that governments will easily accept Starlink operating in their country. Eager prospective customers in India, for example, were surprised and disappointed to discover that the government ordered SpaceX to refund their pre-order deposits and cease taking any new orders, as the Indian government has not issued a license to Starlink to operate there. Starlink’s head in India resigned shortly after. The India experience for SpaceX is vivid reminder to all companies that each country has its own licensing rules and a political landscape that needs to be deftly negotiated.

If you actually get one of Starlink’s kits, what is the experience like? Journalists wrote a variety of pieces on their experience last summer.

Both the Verge and customers like Jeff Geerling talked about the issue of obstructions. Trees were brought up as a big issue. Starlink cannot connect through them, so having trees around the dish can be an issue even if there’s a clear view overhead. Until there is denser satellite coverage, the horizon needs to be substantially visible to avoid interruption.

CNET said it was easy to set up, but talked about “intermittent service outage in my area.” The reviewer, John Kim, turned to the Starlink subreddit for answers, and they’d said that it was a wider issue affecting multiple regions. When the outage cleared, “Starlink worked flawlessly,” with a 78 Mbps download speed at a latency of 36ms.

Cansumer said it is “much, much ‘better than nothing’ in Canada and provides considerably better speeds and latencies than its traditional satellite internet and LTE wireless internet competitors for a competitive price.” They pointed to weather-based performance reductions as an issue, though Geerling said he’d had few issues with weather.

Toms Guide said “Starlink delivers on a promise that’s been made for decades: getting broadband internet access in rural parts of the country” but pointed to the short cable length between the dish and the box as an issue. Portugal’s Altair.io repeated the comments about obstructions and said that “Starlink can’t compete” in rural areas with good internet infrastructure, but said it was a competitive choice where other internet options are poor or nonexistent.

MIT Technology Review asked “who is Starlink really for?” The Review says that it can service people without reliable Internet, like people in the developing world relying on expensive cellular data, and also provide higher-quality broadband internet to people in the developed world with poor-quality Internet, like rural Americans. They did question whether 5G might reduce the demand. PC Magazine also says that people “love Starlink but don’t really get it”, and echoed the belief that it is a focal point for Americans’ dissatisfaction with local Internet providers.

Most of the digital media reviews are from mid-2021. Over the last month, however, there’s been a steady stream of reactions and reviews on YouTube.

UK YouTuber (and network engineer) Alex Brooks said that while upload speeds were disappointing, pings of less than 30ms were commonplace and download speeds were fine. He said “for casual gaming, that is impressive.” Andy Slye said that the speed increase “wasn’t just a gamechanger, it’s a life-changer.” Meteorologist Nick Stewartechoed Brooks’ concern about upload speed, but also said that the latency was consistently good. He noted there were fluctuations in download speed, but didn’t see any impact on gaming or streaming. A YouTuber named “Shane DIY” outside Phoenix, Arizona finally had their Starlink kit show up in December, and was up and running after a few minutes putting the dish out in their backyard. He then installed it on the roof, and was impressed with the speed, though he had some networking issues.

People on Reddit also said it was a life-changer.  One recent poster from New England said that going from download speeds of 5Mbps to over 100Mbps was life-changing, and the service was cheaper than the others he’d tried. A request for impressions from an Ontario-based user also had a variety of responses from people saying “Fast, reliable and the ping time is much better than 120+ms”, “Starlink since end of July, happy with it,” and “It is heaven! 200 mbps all the time for me. It handles bad weather surprisingly well.”

Granted, as an enthusiast subreddit, these reviews are expected to be generally positive. But between the Reddit responses and the YouTube reviews, it shows how many people outside expensive urban markets see it as “not just a gamechanger, but a life-changer.” In many ways, it will help bring people outside of cities into the digital conversation, and might even change people’s choices on where to live.

That augurs well for the service’s future, as this is just the start. Starlink hasn’t even begun making inroads in the developing world, at least outside of a small part of Chile. But this same ability to provide high-quality Internet access to far-flung people across the globe will not only improve their ability to access information and services, but will give them a voice that matches even the most tech-blessed urban westerner.

Note: While this article was free, please consider subscribing to SpaceQ to access all our content. And for a limited time, until January 12, 2022, and in celebration of our 5th anniversary, get 25% off an annual subscription. Use discount code 5thbd when creating your account.