NASA's new space telescope has opened its gold-plated, flower-shaped mirror, the largest and most sensitive ever launched 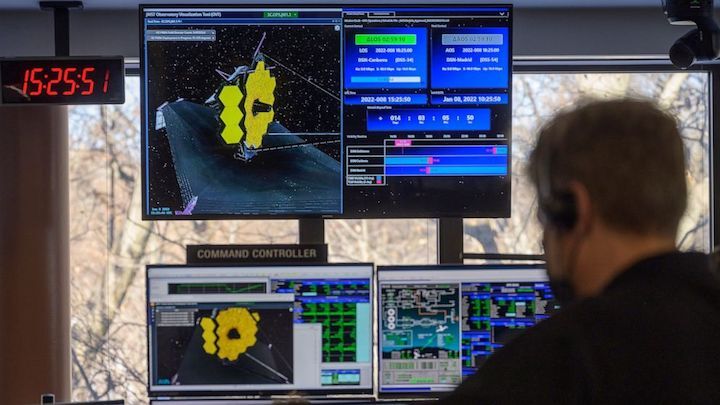 The last portion of the 21-foot (6.5-meter) mirror swung into place at flight controllers’ command, completing the unfolding of the James Webb Space Telescope.

“I’m emotional about it. What an amazing milestone. We see that beautiful pattern out there in the sky now,” said Thomas Zurbuchen, chief of NASA’s science missions.

More powerful than the Hubble Space Telescope, the $10 billion Webb will scan the cosmos for light streaming from the first stars and galaxies formed 13.7 billion years ago. To accomplish this, NASA had to outfit Webb with the largest and most sensitive mirror ever launched — its “golden eye,” as scientists call it.

Webb is so big that it had to be folded orgami-style to fit in the rocket that soared from South America two weeks ago. The riskiest operation occurred earlier in the week, when the tennis court-size sunshield unfurled, providing subzero shade for the mirror and infrared detectors.

Flight controllers in Baltimore began opening the primary mirror Friday, unfolding the left side like a drop-leaf table. The mood was even more upbeat Saturday, with peppy music filling the control room as the right side snapped into place. After applauding, the controllers immediately got back to work, latching everything down. They jumped to their feet, exchanged high-fives and cheered from behind masks when the operation was finally complete 2 1/2 hours later, doing their best to remain socially distant because of the global surge in COVID-19 cases.

“We have a deployed telescope on orbit, a magnificent telescope the likes of which the world has never seen,” Zurbuchen said, congratulating the team. “So how does it feel to make history, everybody? You just did it.”

His counterpart at the European Space Agency, astronomer Antonella Nota, noted that after years of preparation, the team made everything look “so amazingly easy.”

“This is the moment we have been waiting for, for so long,” she said.

Webb's main mirror is made of beryllium, a lightweight yet sturdy and cold-resistant metal. Each of its 18 segments is coated with an ultra thin layer of gold, highly reflective of infrared light. The hexagonal, coffee table-size segments must be adjusted in the weeks ahead so they can focus as one on stars, galaxies and alien worlds that might hold atmospheric signs of life.

“It's like we have 18 mirrors that are right now little prima donnas all doing their own thing, singing their own tune in whatever key they're in, and we have to make them work like a chorus and that is a methodical, laborious process," operations project scientist Jane Rigby told reporters.

Webb should reach its destination 1 million miles (1.6 million kilometers) away in another two weeks; it's already more than 667,000 miles (1 million kilometers) from Earth since its Christmas Day launch. If all continues to go well, science observations will begin this summer. Astronomers hope to peer back to within 100 million years of the universe-forming Big Bang, closer than Hubble has achieved.

Project manager Bill Ochs stressed the team isn't letting its guard down, despite the unprecedented successes of the past two weeks.

“It's not downhill from here. It's all kind of a level playing field," he said.

The Webb telescope has a long journey ahead. Over the next few weeks, it will align and calibrate its mirrors so they act as one uniform object to reflect light.

It will then proceed to its destination, "Lagrange point 2."

The first images from the telescope are expected in the spring.

DEPLOYMENT OF THE JAMES WEBB SPACE TELESCOPE IS COMPLETE

The James Webb Space Telescope has unfolded its primary mirror, marking the end of the deployment phase for the observatory.

Just over two weeks into the mission and the origami-like James Webb Space Telescope (JWST) has unfolded just as expected. NASA controllers announced today at 19:17 UT/1:17 p.m. EST that the telescope's final primary mirror segment had locked into place, marking the end of the deployment phase for the space telescope.

"Today, NASA achieved another engineering milestone decades in the making," says Bill Nelson (NASA Adminstrator) in a recent press release. "While the journey is not complete, I join the Webb team in breathing a little easier and imagining the future breakthroughs bound to inspire the world."

JWST launched on an Ariane 5 rocket from the Guiana Space Center on December 25, 2021. The last couple weeks have seen the telescope's separation from the second stage, the unfolding and tensioning of its sunshield, and myriad other steps to full deployment.

The observatory sports a 6.5-meter (21.6-foot) primary mirror and a sunshield the size of a tennis court, all of which had to fold up to fit inside the 4.57 meter-wide Ariane 5 rocket fairing before carefully unfolding in space after launch.

The size also meant that there wasn’t a vacuum chamber on Earth large enough to test the telescope in its fully unfurled configuration; instead, engineers are carefully watching how the telescope reacts to the super-cold, zero-g environment of space as it deploys, and adjusting the deployment phase accordingly.

On January 5th, the Contamination Control Cover for ESA’s Mid-Infrared Instrument (MIRI) was unlocked. This cover protected MIRI from ice contamination during and after launch, in lieu of traditional heater units. The telescope's secondary mirror also deployed on January 5th. This mirror sits on a 7-meter long boom, and had to lock in place to a tolerance of less than 1.5 millimeters, all in micro-gravity and at extremely cold temps. The secondary mirror itself is 0.74-meters (29 inches) across, just slightly smaller than Spitzer’s 33-inch primary (James Webb is a big 'scope!). The heat radiator (the Aft Deployable Instrument Radiator, ADIR) was successfully deployed on January 6th.

The deployment of JWST's 18-segment primary mirror occurred over January 7th and 8th, marking the end of the deployment phase. The primary essentially has three panels: a central portion and two "wings," which are now folded out and locked in position.

Why aren’t there cameras on Webb? While it certainly would have been interesting to see the actual unfolding process in action, as some have commented on social media, the mission team ultimately decided against including cameras due to the complexity they would have added to an already way over-budget, $11 billion mission. Any cameras would have had to be encapsulated and specially designed to work in ultra-cold and dark conditions, all without adding heat into a system that needs to stay extremely cold. Additional wiring harnesses and hardware, running along more moving joints and potential points of failure, would also have been required.

Over the next few days, JWST will shift its 18 individual mirror segments out of their launch configuration, using six actuators attached to the back of each segment. Then, around January 23rd, 29 days post-launch, thrusters will fire to put the telescope into a halo orbit around the Sun-Earth L2 point, 1.5 kilometers (1 million miles) from Earth. After a five-month phase in which the telescope cools to below 50K (-370°F), tweaking mirror alignment to bring images into focus, and instruments are calibrated, science operations will begin in mid-2022.

JWST is expected to push forward the boundaries of modern astronomy, catching galaxies and stars in the act of formation in the early universe, characterizing the chemical composition of exoplanet atmospheres, and much more.

JWST is now unfolded, healthy, and on its way to its new home around L2.

Astronomer Gianluca Masi and the Virtual Telescope Project will provide a live view of the JWSTstarting tonight at 21:30 UT/4:30 PM EST. 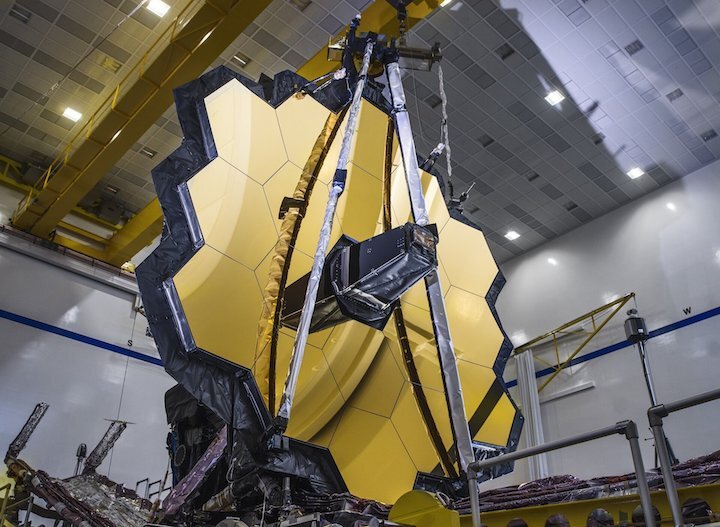 “The successful unfolding of the Webb telescope has been a complex but impressive engineering masterpiece. On behalf of ESA, I want to sincerely congratulate our colleagues at NASA for this achievement. Webb is an international partnership led by NASA, where ESA is providing key contributions in the form of instruments, science teams and, very importantly, a successful launch on Christmas Day from the European Spaceport in Kourou. I am grateful to NASA, CSA and our European team including CNES, Arianespace and ArianeGroup for this excellent cooperation,” says Josef Aschbacher, ESA Director General.

The two wings of Webb’s primary mirror were folded to fit inside the fairing of an ESA-provided Ariane 5 rocket prior to launch. After more than a week of other critical spacecraft deployments, the Webb team began remotely unfolding the hexagonal mirror segments of the largest mirror ever launched into space. 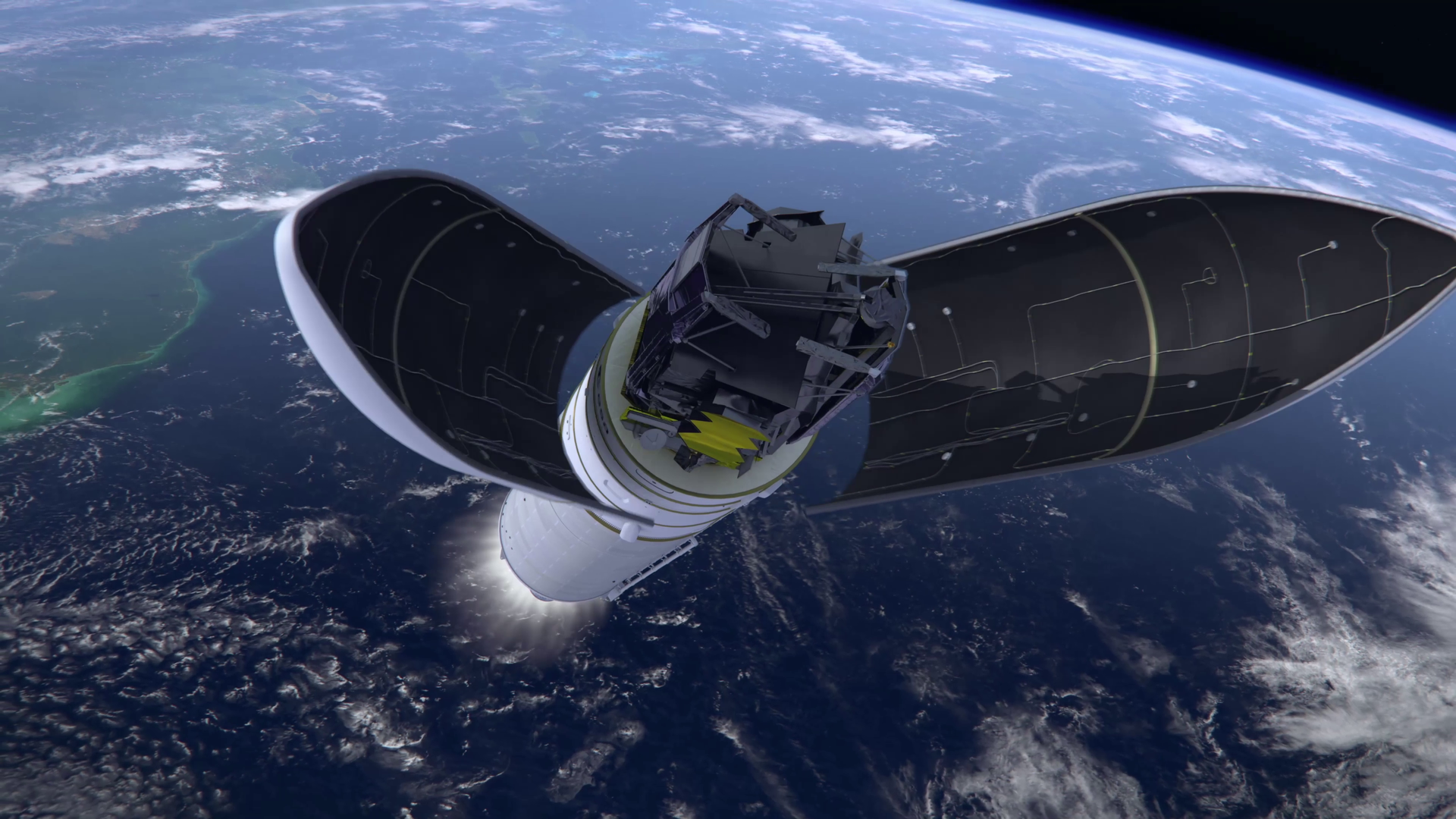 Animation of Webb's launch and unfolding sequence
Access the video

This was a multi-day process, with the first (port) side of the mirror deployed on 7 January and the second (starboard) side of the mirror deployed on 8 January. Mission Operations Center ground control at the Space Telescope Science Institute in Baltimore began deployment of the starboard mirror at 13:53 GMT/14:53 CET. Once the primary mirror’s second side panel extended out and latched into position at 18:17 GMT/19:17 CET, all deployments were declared complete.

The world’s largest and most complex space science observatory will now begin releasing and moving its 18 primary mirror segments to align the telescope optics. The ground team will command 126 actuators on the backside of the segmented mirrors into position and flex each mirror – an alignment process that will take months to complete. Then, the science instruments will undergo a calibration period, prior to delivering Webb’s first images this summer.

Soon, Webb will also make a third mid-course correction burn – one of three planned course corrections to place the spacecraft precisely in orbit around the second Lagrange point, commonly known as L2, 1.5 million km from Earth. This is Webb’s final orbital position, where its sunshield will protect it from light from the Sun, Earth and Moon that could interfere with observations of infrared light. Webb is designed to peer back over 13.5 billion years to capture infrared light from celestial objects with much higher resolution than ever before, and to study our own Solar System as well as distant worlds.

“We are thrilled that the complex telescope unfolding worked successfully. Now we hold our breath for the optics alignment, the instrument commissioning, and finally the fascinating first science results,” says Prof. Günther Hasinger, ESA Director of Science.

Webb is the largest, most powerful telescope ever launched into space. As part of an international collaboration agreement, ESA has provided the telescope’s launch service using the Ariane 5 launch vehicle. Working with partners, ESA was responsible for the development and qualification of Ariane 5 adaptations for the Webb mission and for the procurement of the launch service by Arianespace. ESA has also provided  the workhorse spectrograph NIRSpec and 50% of the mid-infrared instrument MIRI, in collaboration with the University of Arizona. Webb is an international partnership between NASA, ESA and the Canadian Space Agency (CSA).