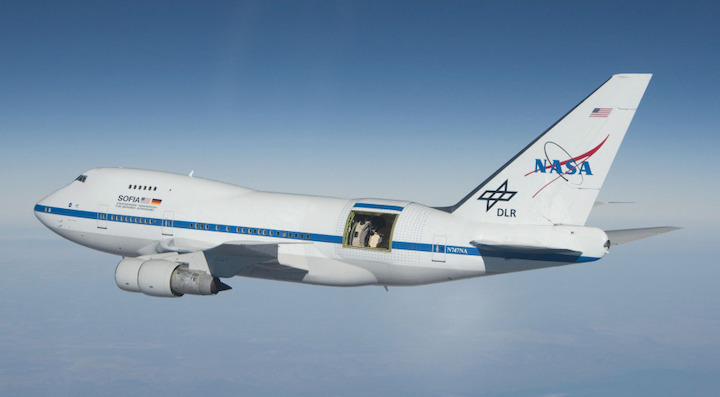 ORLANDO, Fla. — Officials with a NASA airborne observatory responded to a stinging rebuke in the latest astrophysics decadal survey by arguing that the facility, targeted for termination, is essential to the agency’s broader science program.

In a virtual town hall meeting Jan. 10, Margaret Meixner, director of science mission operations for the Stratospheric Observatory for Infrared Astronomy (SOFIA), said that the scientific productivity of the program, which flies an infrared telescope on a Boeing 747, was improving and that it served as a “steppingstone” for future space missions.

“SOFIA is only far-infrared observatory for the next decade. SOFIA will help prepare the astronomical community, both scientifically and technologically, for Astro2020’s ambitious future,” she said.

Astro2020 is a reference to the latest astrophysics decadal survey, published in November. That report recommended an ambitious series of large space observatories, including a far-infrared space telescope based on a concept called the Origins Space Telescope developed in support of the decadal survey.

The decadal survey, though, was sharply critical of SOFIA itself, recommending NASA terminate the program. “The survey committee has significant concerns about SOFIA, given its high cost and modest scientific productivity,” the report stated, concluding that it “found no path by which SOFIA can significantly increase its scientific output or relevance to a degree that is commensurate with its cost.”

NASA has already proposed canceling SOFIA in its fiscal year 2022 budget proposal released early last year. The House, in its version of a spending bill, restored funding for SOFIA, while a Senate version was silent about the program. Congress has yet to pass a final fiscal year 2022 spending bill for NASA or any other federal agency.

While not directly addressing the proposed termination of SOFIA, Meixner defended both the scientific relevance and performance of the program. She argued that SOFIA could address a third of the scientific priorities discussed in the decadal survey while also training future astronomers and instrument developers “who will define, develop and use far-infrared space observatories described in the Astro2020 report.”

“SOFIA’s efficiency and scientific productivity are on the right trajectory for SOFIA to achieve its full scientific potential,” she said, noting that annual publication rates for research involving SOFIA have doubled in the last three years, a comment that appeared to address criticism in Astro2020 about the “modest scientific productivity” of the program.

“The Astro2020 comments on SOFIA are based on information from pre-March 2020,” she argued, missing recent improvements in performance.

SOFIA is planning for a next round of observations, called Cycle 10, with proposals due late this month. Meixner said the amount of observing time in Cycle 10 will be 50% higher than in Cycle 6 several years ago.

Despite the uncertainty about SOFIA’s future, Meixner said the program was preparing for the next astrophysics senior review, where NASA evaluates missions that have reached then end of their primary lifetime to determine if they merit an extension based on their cost and scientific merit. The upcoming senior review this year will be the first time SOFIA has participated.

“We have a strong case and we hope to deliver it,” she said.