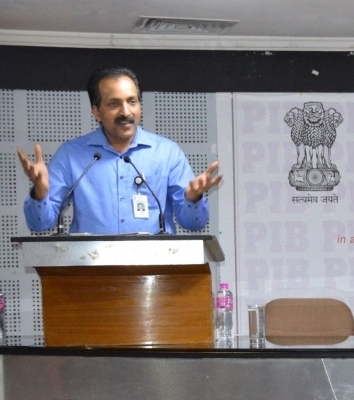 Chennai, Jan 16 (IANS) In a year when the Indian space sector is expected to see some revolutionary changes, S.Somanath on Saturday assumed the charge as the Secretary, Department of Science and Chairman, Space Commission.

The space industry players are expecting rocket speed in ushering in policies and programmes for the entry of private sector players and also activating their regulator, finalising the foreign direct investment (FDI) norms and passing of the Space Activities Bill and others.

At the same time, he should also manage the interests of about 17,300 employees in Indian Space Research Organisation (ISRO) while reorienting its focus towards research and development.

Further, the country’s blue chip space project — Gaganyaan/human space mission — has missed its deadlines and the project has to be put back on track.

“The main challenge before Somanath is to reorient ISRO towards the new vision given by the government. The management of Indian space sector is with ISRO. So the entity has to see how space tech can be leveraged to start a new economic activity, as envisaged by the government, including job creation in the private sector. This will also improve the sector’s contribution to the country’s gross domestic product (GDP),” Rakesh Sasibhushan, Chairman, CII National Committee on Space, told IANS.

He said the country spends about $2 billion on the space sector, but the resultant contribution to the GDP is not much.

“The amount spent on the space programme has not transpired into economic growth. India does not have a robust private sector in space, whereas many other countries that have ventured into this sector have progressed far ahead of India. Prime Minister Narendra Modi had said that ‘the government has no business to be in business’. Previously ISRO was hesitant to follow that and continued in the same old manner,” Sasibhushan remarked.

For instance, there is a big dearth of satellite transponder capacity and many of the 800 and odd Indian television channels are using transponders of foreign satellites.

India with 17 communication satellites are providing 292.5 transponders and 25 GBPS of high throughput capacity.

The ISRO makes about four/five satellites in a year including communication, remote sensing and others which is grossly inadequate considering the potential.

The Indian space agency ISRO is into commercial activity and its policies and procedures are bureaucratic and monopolistic, preventing the entry of other players.

The Central government had announced the deregulation of the space sector in 2020 and it is now 2022 and nothing much has moved in that regard, officials pointed out.

“The realisation of the uncrewed rocket flight — part of India’s human space mission Gaganyaan — will be a major boost, a source of inspiration in the hearts of the people. There will be a lot of excitement with two uncrewed rocket launches,” Dr Chaitanya Giri, Founder, DAWON Advisory & Intelligence told IANS.

He added that the Rs 9,023 crore Gaganyaan has a lot of strategic importance for the country apart from being a scientific achievement mission.

As a part of the space sector reforms, the NewSpace India Ltd (NSIL) in 2022 should decide on the industry player(s) to make the Polar Satellite Launch Vehicle (PSLV) or the PSLV rockets.

The NSIL had called for an Expression of Interest for production of PSLV rockets by an industry consortium.

The government is scouting for a head for NSIL.

On the rocket side, Somanath, a rocket specialist has to see the realisation of the small rocket with a long winding name Small Satellite Launch Vehicle (SSLV) with a capacity to carry 500 kg satellites.

The ISRO should also make progress in the construction of its second rocket port at Kulasekarapattinam in Tamil Nadu.

With the ISRO shifting focus to research and development (R&D), as part of the reform process, the committee that has been set up to recommend the methodology for right-sizing and optimal utilisation of the existing science and technology (S&T) manpower is expected to submit its report.

For the private sector startups making rockets and satellites too, next year is going to be crucial.

Small rocket makers Skyroot Aerospace Private Ltd and Agnikul Cosmos are hoping to fly their vehicles by the end of 2022 while the satellite maker Syzygy Space Technologies Pvt Ltd, commonly known as Pixxel is expected to fly its satellite sometime next year.

“The year 2022 is an important year as we bring everything together for a launch of Vikram-1 rocket and join the elite of the world in providing launch solutions,” Pawan Kumar Chandana, CEO and Chief Technology Officer, Skyroot Aerospace, had told IANS.

As a part of opening up the space sector, the Indian government has constituted the Indian National Space Promotion and Authorisation Centre (IN-SPACe) as the sectoral regulator for the private players.

The IN-SPACe will also enable usage of ISRO’s facilities for them.

There are over 30 requests from private companies for support from IN-SPACe for their space activities which are expected to be decided next year.

Industry officials expect the IN-SPACe and the sectoral regulations to be as agile as the startups.

“Somanath is the apt person to drive this change and I have no doubt that he’ll take ISRO to new heights,” Sasibhushan concluded.