A collision with a Mars-size planet 4.5 billion years ago may have left a permanent impact on our planet's deep mantle. 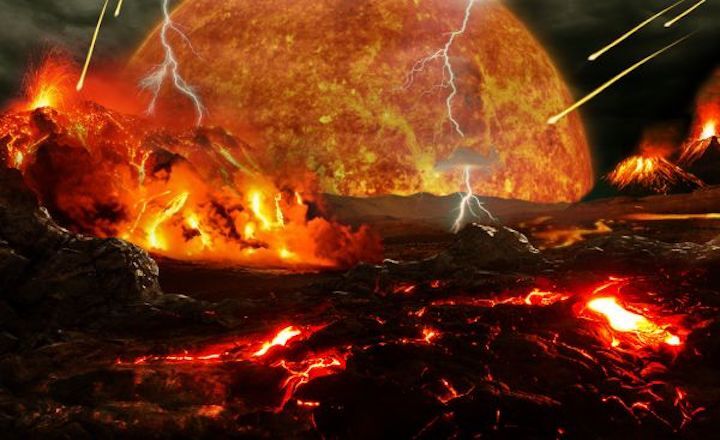 A group of mysterious, ultradense structures just outside Earth's core may be the remnants of an ancient interplanetary collision, new research suggests.

These strange structures are known as ultralow-velocity zones (ULVZs), because seismic waves generated by earthquakes travel about 50% more slowly through these zones than through the surrounding mantle. That means the ULVZs are also much denser than the rest of the mantle, and possibly made of heavier elements.

It's hard to say anything for certain about these dense blobs of rock, because the ULVZs sit nearly 1,800 miles (2,900 kilometers) below Earth's surface — one group clustered deep below Africa, and another below the Pacific Ocean, where the rocky mantle and liquid-metal outer core meet. That's far too deep for human eyes to see; only seismic data can offer clues about the size, shape and structure of the ULVZs.

Now, using a new computer model and fresh seismic observations from deep below Australia and New Zealand, researchers may have added an important piece to the ULVZ puzzle. According to a study published Dec. 30, 2021,  in the journal Nature Geoscience, these zones aren't uniform structures but rather seem to be made of layers of different materials that accumulated over the eons.

"The most surprising finding is that the ultra-low velocity zones are not homogenous but contain strong structural and compositional variations within them," lead study author Surya Pachhai, a postdoctoral scholar at the Australian National University, said in a statement. "This type of ULVZ can be explained by chemical [variations] created at the very beginning of the Earth's history, which are still not well mixed after 4.5 billion years of mantle convection."

(Mantle convection is the process by which the solid rocks in the planet’s mantle slowly move in accordance with heat currents.)

After their computer simulations showed that a layered or mixed structure was likely within the ULVZs, the researchers suggested a possible origin story for the structures — a story that starts more than 4 billion years ago, around the time early Earth's rocky crust first formed. Beneath the surface, heavier elements, like iron, were sinking toward the planet's core, while lighter elements, like silicon, rose toward the mantle.

This organization all went haywire when a Mars-size planet known as Theia slammed directly into the early Earth — an ancient cataclysm that researchers call the giant impact hypothesis. The collision may have scattered enormous amounts of debris into Earth's orbit — possibly leading to the formation of the moon — while also raising the entire planet's temperature and creating a large "ocean" of magma on the planet's surface, Pachhai said.

Various rocks, gases and crystals forged during the collision would have been scattered through this magma ocean, the researchers said — but not forever. Over the following billions of years, heavier materials would have sunk toward the bottom of the mantle, followed by lighter ones — eventually creating a densely layered structure of iron and other elements at the core-mantle boundary. As the mantle churned over the ages, this dense layer would have separated into smaller clumps spread across the lower mantle — effectively giving us the ULVZs we know of today.

This scenario may not explain the source of all ULVZs, the researchers added, as there is also some evidence that other phenomena — such as melting ocean crust sinking into the mantle — could explain ULVZs. However, the team's models show that the giant impact hypothesis reliably explains how the dense, layered zones could have been created.