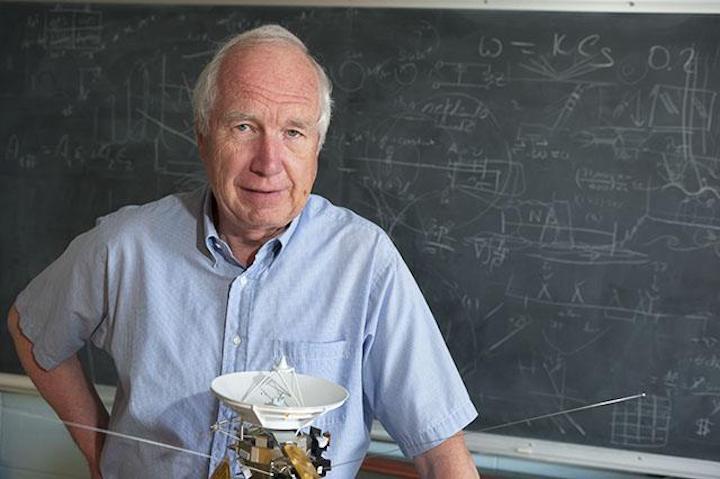 Don Gurnett, a world-renowned space scientist who spent more than six decades at the University of Iowa as a student, teacher, and researcher, died Thursday, Jan. 13, 2022. He was 81. Photo by Tim Schoon.

Donald Gurnett, a pioneering space scientist whose career as a student, teacher, and researcher at the University of Iowa spanned more than 60 years, died on Thursday, Jan. 13, 2022. He was 81.

Gurnett entered Iowa as a freshman in September 1957, the year the Russians launched the orbiting satellite Sputnik 1, ushering in the space age. His timing couldn’t have been better: Within a few months, he was working for James Van Allen, the famed UI physicist who discovered the harsh radiation environment around Earth that would bear his name.

Gurnett earned his undergraduate degree in electrical engineering in 1962, and his doctoral degree in physics in 1965. He joined the UI faculty that same year.

When he retired in May 2019, Gurnett pointed to a litany of accomplishments that few—if any—will be able to match: He earned his undergraduate, master’s, and doctoral degrees from Iowa, just when space exploration began; he is considered by many the founder of the field of space plasma wave physics; his discoveries include solving how auroras are created, the first detailed measure of radio emissions from the outer planets, and informing humankind of the first spacecraft to leave the solar system and reach the realm among the stars.

“My father was extremely proud of having spent his career at the University of Iowa and was deeply committed to the future of experimental space physics at Iowa,” says his daughter, Christina Gurnett. “He continued working until the last week of his life, giving interviews and recording talks on Zoom. His legacy will continue through the work of the students he inspired through his teaching.”

Donald Gurnett’s legacy at the University of Iowa

• Enrolled at the UI as a 17-year-old undergraduate in September 1957
• Began working for Professor James Van Allen in fall 1958
• Earned his undergraduate, master’s, and doctoral degrees from the UI
• Mentored by Van Allen throughout his academic career (undergrad to doctorate)
• Helped establish space plasma physics through his multiple discoveries and knowledge in the field
• Wrote a book titled Introduction to Plasma Physics
• Designed and built instruments for more than 35 space missions
• Was involved in about $600 million in sponsored research at the UI
• Published more than 700 papers—including 146 as first author
• Taught undergraduate and graduate-level classes for more than 50 years, a total of 111 classes, ranging from General Astronomy to Space Plasma Physics
• Advised 47 master’s and doctoral students who completed 62 thesis projects

For more than 50 years, Gurnett taught at Iowa —a total of 111 undergraduate and graduate-level classes, ranging from General Astronomy to a Space Physics seminar.

“Don Gurnett is a legend in space exploration who has made profound contributions to the university’s teaching, research, and institutional profile,” says UI President Barbara Wilson. “His theoretical observations and experimental findings over a 60-year career—from the dawn of the Space Age to the present—have revolutionized the field of space plasma physics and have broadened humanity’s knowledge of Earth and space. His impact on the UI has been equally noteworthy—from the multitude of students he’s taught and mentored to the sustained goodwill he has created for the university. He defines what faculty greatness means at the UI.”

Gurnett was born on April 11, 1940, and grew up on a farm near Fairfax, Iowa. From childhood, he was fascinated by flight. He designed and flew model airplanes with a club at the Cedar Rapids airport, where he met a German expatriate scientist named Alexander Lippisch, who had developed the first operational rocket‐powered fighter plane and was an early influence on Gurnett. He also learned from an old textbook borrowed from the Cedar Rapids Public Library how the ancient Chinese designed rockets with saltpetre, charcoal, and sulphur, and he decided to build and fly his own rocket-powered models using the same materials.

“This doesn’t sound exceedingly smart, but I made rockets,” Gurnett said at the time of his retirement in 2019. “I learned pretty much on my own. This was the beginning of a scientist thinking.”

Those years spent building rockets and model planes paid dividends when Gurnett began his studies in electrical engineering at Iowa. He admitted he hadn’t heard of Van Allen when he arrived on campus as a 17-year-old, but that changed with Explorer 1’s launch on Jan. 31, 1958.

About a month later, Gurnett received a letter from Van Allen about his application. He was hired.

“I think he needed people who knew electronics,” Gurnett said.

Gurnett started working for Van Allen as a sophomore in fall 1958. Alongside a small group of faculty and graduate students, Gurnett participated directly in the design, building, and flight of more than a half-dozen missions, including in June 1961—the first spacecraft entirely constructed at a university and outfitted with the first digital telemetry system.

“I remember coming home, when the robins were waking up to sing, and then going to classes,” said Gurnett, who added for some stretches he worked up to 80 hours a week in the lab. “It was very exciting. You can’t appreciate how working on a national objective to catch up with the Russians, how important it was in those days. The University of Iowa was the center of space research. And I was right in the middle of it.”

Gurnett continued to be in the middle of space research for the next six decades, amassing a record of instrument building, discoveries, and scholarship in space plasma physics that has revolutionized the field.

He was the first to characterize strange near-Earth space sounds, such as whistlers and dawn chorus. He helped solve how auroras on Earth are created, from data collected by instruments he designed and built. Other Gurnett-inspired instruments on separate missions yielded the first detection of lightning on Jupiter, and further defined Saturn’s magnetosphere and exquisite rings. More recently, Gurnett led a team of engineers and scientists in the Department of Physics and Astronomy in designing and building a radar detector for the Mars Express mission to probe the Red Planet’s subterranean permafrost for evidence of water.

In all, Gurnett was part of 41 space missions, and nearly two-thirds of the 67 spacecraft projects the UI has been involved in.

“Don’s career is really the career of our effort in space,” says Jim Green, director of NASA’s Planetary Science Division, and a Gurnett student who earned his doctoral degree from the UI in 1979.

One mission always stood out to Gurnett: Voyager 1. The spacecraft, launched in 1977, was the second to visit Jupiter and Saturn. In 2012, Gurnett’s radio- and plasma-wave instrument onboard the craft confirmed that Voyager 1 had crossed the heliopause—the plasma boundary of the solar system—farther than any man-made object had ever traveled.

“I’m very proud of being involved; I can’t help it,” Gurnett said, almost sheepishly, in 2019. “How can you say it? Of all things that NASA’s ever launched, Voyager is right up there.”

Gurnett taught legions of students who can attest to his influence in the classroom, in the lab, and as a mentor.

Retired professor of Physics and Astronomy Robert Mutel, who worked with Gurnett for years, praised his colleague for his passion for teaching space physics even as he garnered worldwide praise for his research.

“Professor Gurnett perfectly embodied the legacy of his mentor, James Van Allen: brilliant but unpretentious, hard-working, completely dedicated to his students and colleagues and to the University of Iowa,” Mutel says, noting that students in Gurnett’s classes consistently rated him among the best teachers in the department.

“Professor Gurnett had an insatiable desire to thoroughly understand the universe we live in,” says Bill Kurth, a UI research scientist who earned his doctoral degree under Gurnett in 1979. “This curiosity and drive was infectious to his students and illustrates what it means to be a great scientist.”

Even after he retired, Gurnett wandered the halls of the Van Allen building, happy, as always, to spin a story and share advice with students.

“My father inspired me to observe nature and question everything, attend to details, pursue a career in science, maintain a sense of humor and enjoy good company,” says Christina Gurnett, a neurology professor at Washington University in St. Louis. “He enjoyed every aspect of his life and his only regret was that he would not be around to see the next 10 years of data returning from Voyager.”

• S-46 (launched March 23, 1960): First mission Gurnett was involved in as an undergraduate in Van Allen’s lab. He developed and tested a low-energy particle detector.
• Injun 1 (launched June 29, 1961): Gurnett designed and built a digital telemetry system, believed to be the first of its kind for a spacecraft.
• Injun 3 (launched Dec. 12, 1962): Gurnett designed and built the first plasma-wave instrument outfitted on a spacecraft designed and built at the UI.
• Injun 5 (launched Aug. 8, 1968): Gurnett’s electric-field instrument detected a parallel electric field high above Earth’s poles, a discovery that helped solve how auroras are created.
• IMP-6 (launched March 13, 1971): Gurnett’s plasma-wave instrument divined that Earth is an intense radio source, continuously emitting radio waves at the equivalent of 1 billion watts of energy. The discovery is important because it occurs at any planet with a magnetic field, and astronomers use this knowledge to hunt for Earth-like planets beyond our solar system.
• Voyager 2 and 1 (launched Aug. 20, 1977, and Sept. 5, 1977): As principal investigator on plasma wave instruments on both spacecraft, Gurnett obtained the first radio and plasma observations of Jupiter, and the first detection of lightning on the planet. Through data collected by his instrument, Gurnett gained worldwide acclaim when he confirmed the spacecraft had exited the solar system, the first human-made object to enter interstellar space.
• Galileo (launched Oct. 18, 1989): As principal investigator on the plasma wave instrument, Gurnett first detected the telltale signals of a magnetosphere on Jupiter’s moon, Ganymede.
• Cassini (launched Oct. 1997): As principal investigator on the Radio and Plasma Wave Science Investigation instrument, Gurnett obtained the first radio and plasma observations of Saturn, providing greater understanding of the ringed planet’s magnetosphere and auroras.
• Mars Express (launched June 2, 2003): As a co-investigator, Gurnett led the development of a radar detector that is probing Mars’ subterranean permafrost for evidence of water.
• Juno (launched Aug. 5, 2011): As collaborator with the Waves instrument, Gurnett furthered understanding of Jupiter’s auroras, magnetosphere, and radiation belts.