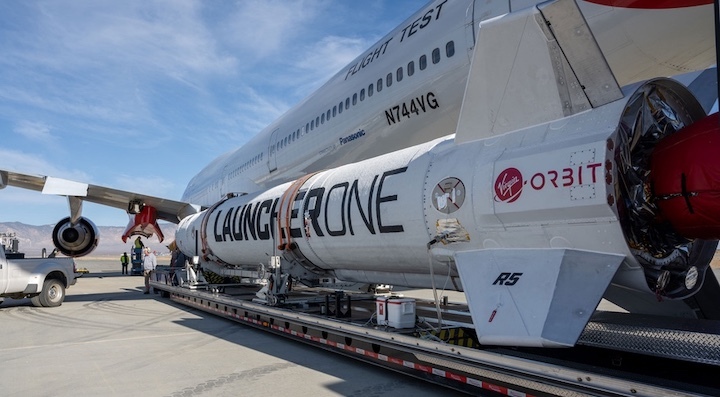 ORLANDO, Fla. — Virgin Orbit is preparing to launch a set of smallsats as both a demonstration of the flexibility of its air-launch system and its ability to increase its cadence of launches.

Virgin Orbit’s next LauncherOne mission, called “Above the Clouds” by the company, is now scheduled for Jan. 13 after a one-day delay “to thoroughly validate the system and to check our sensor readings,” the company tweeted Jan. 11. The Boeing 747 aircraft used as the launch platform is scheduled to take off from Mojave Air and Space Port in California between 4 and 6:30 p.m. Eastern, with release of the rocket over the Pacific about one hour later.

The rocket is carrying seven satellites that will be deployed into an orbit 500 kilometers high at an inclination of 45 degrees. Four of the satellites are provided by the Defense Department’s Space Test Program (STP), two from Polish smallsat developer SatRevolution and one from Spire. The Spire satellite was added relatively late in the planning for the mission, which Virgin Orbit said in December was a demonstration of its responsiveness.

In a call with reporters Jan. 11, company officials did not disclose the total mass of satellites being launched. Asked for details about the STP payloads, Dan Hart, president and chief executive of Virgin Orbit, described them only as “experiments they’re flying, typically to test space technologies.”

Virgin Orbit, though, was happy to talk about a key difference in this flight from the three previous missions: the orbital inclination, which is much lower than previous LauncherOne missions or other launches from sites on the West Coast. “We are going to an orbit that we believe has never been achieved from the West Coast,” said Tony Gingiss, chief operating officer of Virgin Orbit. “We’re proving with this launch that we can get to orbital inclinations and geometries that, probably if you asked us a year ago, we would have said, ‘Well, maybe.’”

LauncherOne is able to reach that inclination by shifting the drop point off the Southern California coast to the west southwest of the one used on previous launches. “We decided to fly the airplane further out over the Pacific so that we could fly along the coast of South America without going over landmasses,” Hart said.

The upcoming launch is the first of six Virgin Orbit has on its manifest for 2022. Two of those launches will fly out of Spaceport Cornwall in England in the middle of the year, while the rest will fly from Mojave.

Gingiss said the company has been working to increase the pace of launch preparations, even though that has not been reflected in the tempo of launches themselves: this mission is taking place six and a half months after the previous LauncherOne mission, which took place about five and a half months after the company’s first successful LauncherOne mission in January 2021.

“We’ve basically cut it in half almost every successive launch to date,” he said of the time to prepare the vehicle for launch. One example is that, for this mission, the launch vehicle left Virgin Orbit’s factory in Long Beach, California, at 4 a.m. and was installed on its 747 aircraft in Mojave six hours later. “That’s a great example of something that probably previously would have been a couple or few days.”

“There’s certainly improvements you’re going to see throughout 2022 in terms of the timing between rockets,” Gingiss added. “We are continuing to ramp up our efficiencies in our factory as well, which will allow us to get rockets out more quickly.”

The company is looking at other sites for LauncherOne missions in 2023 and beyond. Hart said he expected the company to fly out of Oita, Japan, in 2023 after signing a memorandum of understanding with ANA Holdings, parent company of All Nippon Airways, in November 2021. There are also ongoing discussions with Brazil as well as interest from Australia and several European countries.

Virgin Orbit signed a deal with the Space Force in 2020 to launch from Andersen Air Force Base in Guam, but even after the completion of an environmental review last year a launch there is not yet scheduled, he said. “We’re coordinating and in discussions with the Space Force on when they want to fly from there,” he said. 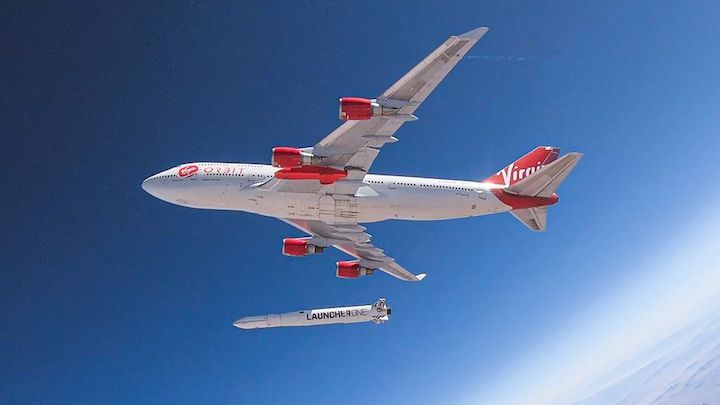 RAF pilot Matthew Stannard will be in the cockpit of a jumbo jet on Thursday when it launches a rocket to space from out over the Pacific Ocean.

The aviator is currently seconded to Sir Richard Branson's satellite launch company, Virgin Orbit, which will be attempting to loft seven spacecraft.

"Stanny", as he's known, is more accustomed to firing missiles from Tornado and Typhoon fighter jets.

Unleashing a 21m (70ft) space booster will be a new experience.

"Stanny has been a wonderful addition to our team. As you'd expect given his background with the RAF, he brings a bright intellect, incredible attention to detail, and an excellent experience base, in addition to his world-class piloting skills," said Virgin Orbit chief operating officer Tony Gingiss.

"Stanny's been deeply involved in all of our planning, and after flying on our previous mission and logging many hours in the simulator, he will be in the right seat for our upcoming 'Above the Clouds' flight, releasing our LauncherOne rocket at the right time, sending our customers' satellites on their way to orbit," the executive told BBC News.

The UK Ministry of Defence anticipates using Virgin Orbit to launch military satellites in the future, and is building a pool of experience in advance of this happening.

His 747-and-LauncherOne system has previously put up 19 satellites. The seven on the latest manifest includes one manufactured in Glasgow by Spire Global, which tracks weather conditions from orbit, along with ship and plane movements.

The Jumbo will fly out over the Pacific with the rocket tucked neatly under the left wing of the former Virgin Atlantic jumbo.

About an hour after take-off, at an altitude of 35,000ft (10km), Flt Lt Stannard will unhook the liquid-fuelled booster and let it go into a freefall.

Roughly four seconds later, as the 747 banks hard to the right, LauncherOne will ignite its first-stage engine to begin the climb to orbit.