These are some extreme explosions. 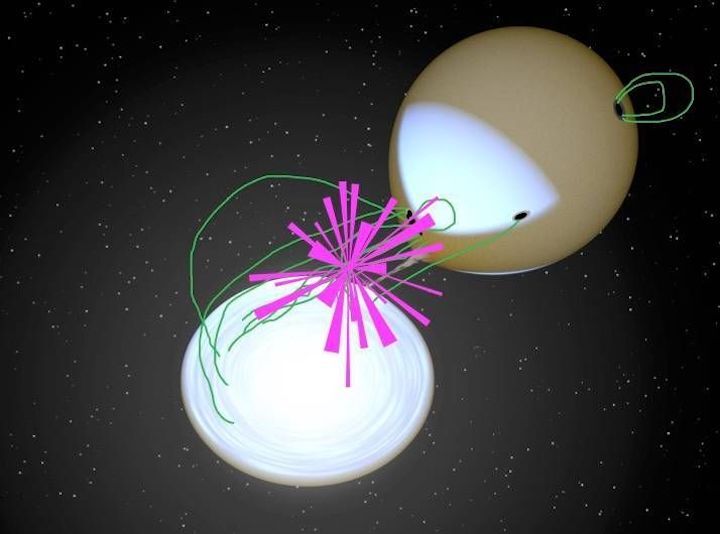 A visualization of a superflare on the recurrent nova v2487 Oph. (Image credit: LSU Prof. Robert Hynes, with his BinSim program

A rare type of white dwarf star has been erupting in the most extreme superflares of its kind ever seen, researchers find in a new study.

The star in question, known as V2487 Oph, is what astronomers call a recurrent nova. A rare type of variable star, these objects are white dwarfs, or superdense dead  stars, that occasionally steal material from a nearby star in a binary system. These thefts cause the white dwarf to briefly "come back to life" and appear bright for up to weeks or even months at a time.

This particular recurrent nova is unique, however.In a new study, three astronomers found that V2487 Oph has extreme superflares, or explosions, that are 100,000 times more powerful than any other known, according to a statement.

"The startling discovery of extreme superflares from a recurrent nova is exciting because it presents astronomers with a profound astrophysics challenge, and because of the implications for life elsewhere in our galaxy," study author Bradley E. Schaefer, a professor at Louisiana State University, said in the statement.

The team estimates that the energy of just one of the superflares from the recurrent nova is equivalent to about 20 million times the energy of the Carrington Event of 1859, the most extreme geomagnetic storm in Earth's recorded history.

"A mind-boggling comparison is that one of the daily superflares on V2487 Oph would be enough to power all of Earth's humanity at its current rate for 24 times the age of the universe," Schaefer said.

"These flares occur about once per day, and they seem to have been occurring nearly continuously from at least 2016 to the present," co-author Ashey Pagnotta, a professor at the College of Charleston in South Carolina, said in the same statement.

Pagnotta added that these superflares "start with a sharp spike up in brightness, taking only about one minute to rise to peak, and then fade back down to their previous level. The typical duration of one flare is around one hour, and at the peak of the flares, the star can brighten by up to a factor of 2.8 (up to 1.1 magnitudes)."

Until now, superflares had only been identified in "ordinary" star types like "normal" (non-recurrent nova) white dwarfs, giant stars, supergiant stars and more. This is the first time that superflares have been detected on an "exotic" type star. V2487 Oph is only the tenth known recurrent nova in the Milky Way galaxy, and recurrent novae remain the rarest class of variable stars.

Superflares can happen on any type of star; about 1.6% of stars like our sun generate such outbursts, according to the statement. Because of their extreme nature, superflares on a star would likely kill any possible surface life on orbiting planets..

"Superflares will variously sterilize life on exoplanet surfaces, fry all electronic technology and strip the entire atmosphere off any exoplanet," the statement noted.

This is a major factor in studying exoplanets and searching for evidence of life.

"To take a recent and well-studied case, a superflare was seen coming from Proxima Centauri, the star closest to our sun, with this star having a planet with roughly one Earth mass and residing within the 'habitable zone,'" Schaefer said. (The habitable zone is the range of orbital distances in which water could be stable on a world's surface.)

"That is, this Earth-like planet is the best possible case for finding life, and it is also the best case for sending out survey and colony ships in the future. But the superflares by themselves would quickly kill all life as we know it, and indeed, the superflares would 'speedily' strip the planet of all atmosphere. Thus, in this case of an Earth-like planet around the closest star, superflares preclude the formation of life on any planet in the system, and it makes the best and closest planet inhospitable for human colonization," Schaefer added.

While superflares on V2487 Oph seem to be frequent, as Pagnotta revealed, the star's last nova event occurred in 1998, fading over a few weeks. In studying this unique star, Schaefer has surmised that it's likely that this nova erupts once about every 20 years. Given this, the star "is expected to erupt again any year now," Schaefer said.