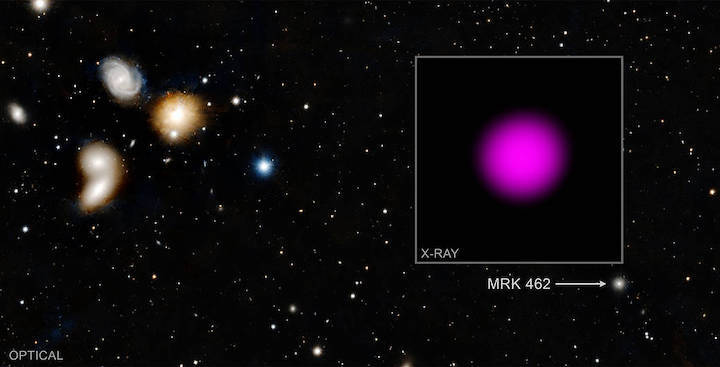 The discovery of a supermassive black hole in a relatively small galaxy could help astronomers unravel the mystery surrounding how the very biggest black holes grow.

Researchers used NASA’s Chandra X-ray Observatory to identify a black hole containing about 200,000 times the mass of the Sun buried in gas and dust in the galaxy Mrk 462.

Mrk 462 contains only several hundred million stars, making it a dwarf galaxy. By contrast, our Milky Way is home to a few hundred billion stars. This is one of the first times that a heavily buried, or “obscured,” supermassive black hole has been found in a dwarf galaxy.

“This black hole in Mrk 462 is among the smallest of the supermassive, or monster, black holes,” said Jack Parker of Dartmouth College in New Hampshire, who led the study with colleague Ryan Hickox, also from Dartmouth. “Black holes like this are notoriously hard to find.”

In larger galaxies astronomers often find black holes by looking for the rapid motions of stars in the centers of galaxies. However, dwarf galaxies are too small and dim for most current instruments to detect this. Another technique is to search for the signatures of growing black holes, such as gas being heated up to millions of degrees and glowing in X-rays as it falls towards a black hole.

The researchers in this study used Chandra to look at eight dwarf galaxies that had previously shown hints of black hole growth from optical data gathered by the Sloan Digital Sky Survey. Of those eight, only Mrk 462 showed the X-ray signature of a growing black hole.

The unusually large intensity of high energy X-rays compared to low energy X-rays, along with comparisons to data at other wavelengths, indicates that the Mrk 462 black hole is heavily obscured by gas.

“Because buried black holes are even harder to detect than exposed ones, finding this example might mean there are a lot more dwarf galaxies out there with similar black holes,” said Hickox. “This is important because it could help address a major question in astrophysics: How did black holes get so big so early in the universe?”

Previous research has shown that black holes can grow to a billion solar masses by the time the universe is less than a billion years old, a small fraction of its current age. One idea is that these huge objects were created when massive stars collapsed to form black holes that weighed only about 100 times the mass of the Sun. Theoretical work, however, struggles to explain how they could pack on weight quickly enough to reach the sizes seen in the early universe.

An alternative explanation is that the early universe was seeded with black holes containing tens of thousands of solar masses when they were created – perhaps from the collapse of gigantic clouds of gas and dust.

A large fraction of dwarf galaxies with supermassive black holes favors the idea that small black hole seeds from the earliest generation of stars grew astonishingly quickly to form the billion solar mass objects in the early universe. A smaller fraction would tip the scales to favor the idea that black holes began life weighing tens of thousands of Suns.

These expectations apply because the conditions necessary for the direct collapse from a giant cloud to a medium-sized black hole should be rare, so it is not expected that a large fraction of dwarf galaxies would contain supermassive black holes. Stellar-mass black holes, on the other hand, are expected in every galaxy.

“We can’t make strong conclusions from one example, but this result should encourage much more extensive searches for buried black holes in dwarf galaxies,” said Parker. “We’re excited about what we might learn.”

These results were scheduled to be presented at the 239th meeting of the American Astronomical Society meeting in Salt Lake City, and were part of a virtual press briefing held on Monday, January 10th.