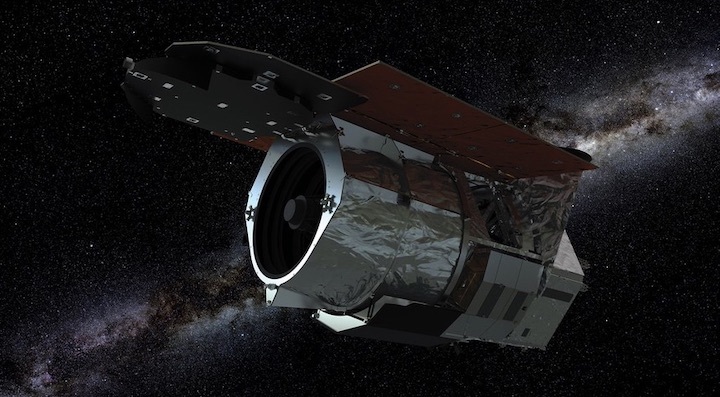 ORLANDO, Fla. — NASA is starting to implement recommendations of the astrophysics decadal survey by announcing plans for a new line of missions and laying the groundwork for future large space telescopes.

During an online town hall meeting Jan. 11, originally intended to take place at the American Astronomical Society conference before that meeting was canceled by the pandemic, the agency announced it will go ahead with a line of “probe” class missions intended to fill the gap between large flagship missions and smaller Explorer-class spacecraft.

NASA had been considering probe-class astrophysics missions, with a cost cap of $1 billion, for some time. Such missions are roughly analogous to the New Frontiers line of NASA planetary science missions, which have similar costs and are limited to a handful of potential destinations for each competition.

The latest astrophysics decadal survey, called Astro2020 and published in November, endorsed work on probe-class missions. However, it recommended a cost cap of $1.5 billion for each mission, noting concept studies of potential probe-class missions prepared to support the decadal struggled to fit within a $1 billion cost cap.

Paul Hertz, director of NASA’s astrophysics division, said at the town hall that the $1 billion cap does not include the cost of the launch, international contributions or observer programs once the mission is operational. “When you put all that in, in addition to headquarters-held reserves, that will bring the total up to about the $1.5 billion recommended by the decadal survey as the total mission cost,” he said.

NASA issued a “community announcement” Jan. 11 that formally announced its intent to pursue the program. That announcement included a notional schedule for the first probe competition, with a draft announcement of opportunity (AO) to be released in June, followed by the final AO in January 2023. Proposals responding to the AO will be due 90 days later.

NASA expects to select two or three proposals for Phase A concept studies, valued at $5 million each, in early 2024. Those proposals would be due late that year, with the selection of the winning mission in the middle of 2025.

NASA will limit proposals for the first probe competition to one of two concepts: a far-infrared imaging and spectroscopy space telescope or an X-ray mission that would complement Athena, a European Space Agency X-ray telescope scheduled for launch by the mid-2030s. Those two concepts were recommended by the decadal survey, Hertz said.

Hertz said NASA anticipates flying one astrophysics probe mission a decade, a pace limited by the budget available to the overall astrophysics program. “I would love to go faster,” he said. “If the astrophysics budget grows fast enough to accommodate the recommendations of the decadal survey plus an increased probe cadence, NASA would certainly be open to that.”

The decadal survey recommended NASA create a “Great Observatories Mission and Technology Maturation Program” that would, over the next several years, lay the groundwork in terms of the advanced technologies needed for those future flagships, and by doing so provide greater confidence in the budgets and schedules for those missions.

Hertz said at the town hall meeting that NASA is taking a multistage approach to implementing that recommendation. The first stage, which starts now, “focuses on the enabling science and technology that are necessary for all of the three future Great Observatories discussed in the decadal survey,” he said.

That effort, which he described as a set of activities rather than a formal program, will include continuing technology maturation activities focused on recommendations from the decadal survey. It will also support scientific investigations intended to help define mission architectures.

The second stage will be the Great Observatories Maturation Program discussed in the decadal, which will start as soon as funding is available. A formal start of pre-Phase A work on the next flagship mission would follow in about six years, based on the decadal’s assessment, although Hertz said NASA will reevaluate that schedule.