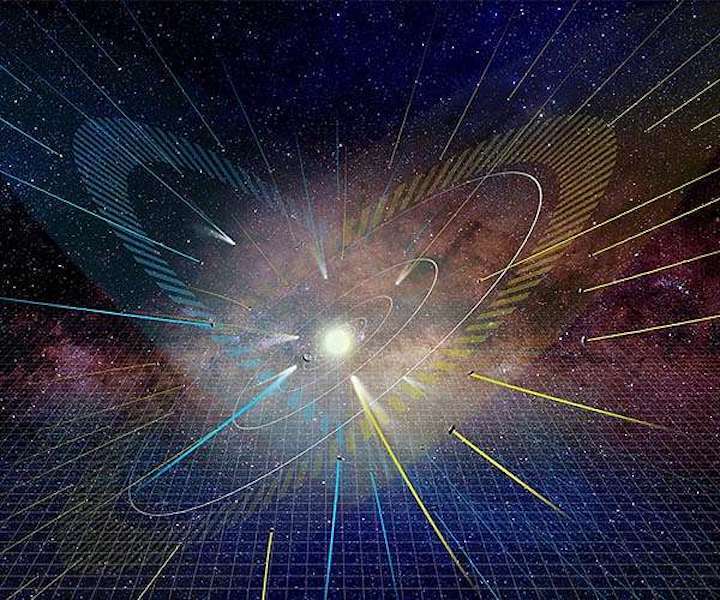 No longer solely in the realm of science fiction, the possibility of interstellar travel has appeared, tantalizingly, on the horizon. Although we may not see it in our lifetimes - at least not some real version of the fictional warp-speeding, hyperdriving, space-folding sort - we are having early conversations of how life could escape the tether of our solar system, using technology that is within reach.

For UC Santa Barbara professors Philip Lubin(link is external) and Joel Rothman(link is external), it's a great time to be alive. Born of a generation that saw breathtaking advances in space exploration, they carry the unbridled optimism and creative spark of the early Space Age, when humans first found they could leave the Earth.

"The Apollo moon voyages were among the most momentous events in my life and contemplating them still blows my mind," said Rothman, a distinguished professor in the Department of Molecular, Cellular and Developmental Biology, and a self-admitted "space geek."

A mere 50 years have passed since that pivotal era, but humanity's knowledge of space and the technology to explore it have improved immensely, enough for Rothman to join experimental cosmologist Lubin in considering what it would take for living beings to embark on a journey across the vast distance separating us from our nearest neighbor in the galaxy. The result of their collaboration was published in the journal Acta Astronautica.(link is external)

"I think it's our destiny to keep exploring," Rothman said. "Look at the history of the human species. We explore at smaller and smaller levels down to subatomic levels and we also explore at increasingly larger scales. Such drive toward ceaseless exploration lies at the core of who we are as a species."

Thinking Big, Starting Small
The biggest challenge to human-scale interstellar travel is the enormous distance between Earth and the nearest stars. The Voyager(link is external) missions have proven that we can send objects across the 12 billion miles it takes to exit the bubble surrounding our solar system, the heliosphere. But the car-sized probes, traveling at speeds of more than 35,000 miles per hour, took 40 years to reach there and their distance from Earth is only a tiny fraction of that to the next star. If they were headed to the closest star, it would take them over 80,000 years to reach it.

That challenge is a major focus of Lubin's work, in which he reimagines the technology it would take to reach the next solar system in human terms. Traditional onboard chemical propulsion (a.k.a. rocket fuel) is out; it can't provide enough energy to move the craft fast enough, and the weight of it and current systems needed to propel the ship are not viable for the relativistic speeds the craft needs to achieve. New propulsion technologies are required - and this is where the UCSB directed energy research program of using light as the "propellant" comes in.

"This has never been done before, to push macroscopic objects at speeds approaching the speed of light," said Lubin, a professor in the Department of Physics. Mass is such a huge barrier, in fact, that it rules out any human missions for the foreseeable future.

As a result, his team turned to robots and photonics. Small probes with onboard instrumentation that sense, collect and transmit data back to Earth will be propelled up to 20-30% of the speed of light by light itself using a laser array stationed on Earth, or possibly the moon. "We don't leave home with it," as Lubin explained, meaning the primary propulsion system stays "at home" while spacecraft are "shot out" at relativistic speeds. The main propulsion laser is turned on for a short period of time and then the next probe is readied to be launched.

"It would probably look like a semiconductor wafer with an edge to protect it from the radiation and dust bombardment as it goes through the interstellar medium," Lubin said. "It would probably be the size of your hand to start with." As the program evolves the spacecraft become larger with enhanced capability. The core technology can also be used in a modified mode to propel much larger spacecraft within our solar system at slower speeds, potentially enabling human missions to Mars in as little as one month, stopping included. This is another way of spreading life, but in our solar system(link is external).

At these relativistic speeds - roughly 100 million miles per hour - the wafercraft would reach the next solar system, Proxima Centauri, in roughly 20 years. Getting to that level of technology will require continuous innovation and improvement of both the space wafer, as well the photonics, where Lubin sees "exponential growth" in the field. The basic project to develop a roadmap to achieve relativistic flight via directed energy propulsion is supported by NASA and private foundations such as the Starlight program and by the Breakthrough Initiatives as the Starshot program.

"When I learned that the mass of these craft could reach gram levels or larger, it became clear that they could accomodate living animals," said Rothman, who realized that the creatures he'd been studying for decades, called C. elegans, could be the first Earthlings to travel between the stars. These intensively studied roundworms may be small and plain, but they are experimentally accomplished creatures, Rothman said.

"Research on this little animal has led to Nobel prizes to six researchers thus far," he noted.

C. elegans are already veterans of space travel, as the subject of experiments conducted on the International Space Station and aboard the space shuttle, even surviving the tragic disintegration of the Columbia shuttle. Among their special powers, which they share with other potential interstellar travelers that Rothman studies, tardigrades (or, more affectionately, water bears) can be placed in suspended animation in which virtually all metabolic function is arrested. Thousands of these tiny creatures could be placed on a wafer(link is external), put in suspended animation, and flown in that state until reaching the desired destination. They could then be wakened in their tiny StarChip and precisely monitored for any detectable effects of interstellar travel on their biology, with the observations relayed to Earth by photonic communication.

"We can ask how well they remember trained behavior when they're flying away from their earthly origin at near the speed of light, and examine their metabolism, physiology, neurological function, reproduction and aging," Rothman added. "Most experiments that can be conducted on these animals in a lab can be performed onboard the StarChips as they whiz through the cosmos." The effects of such long odysseys on animal biology could allow the scientists to extrapolate to potential effects on humans.

"We could start thinking about the design of interstellar transporters, whatever they may be, in a way that could ameliorate the issues that are detected in these diminutive animals," Rothman said.

Of course, being able to send humans to interstellar space is great for movies, but in reality is still a far away dream. By the time we get to that point we may have created more suitable life forms or hybrid human-machines that are more resilient, Lubin said.

"This is a generational program," he said. Scientists of coming generations ideally will contribute to our knowledge of interstellar space and its challenges, and enhance the design of the craft as technology improves. With the primary propulsion system being light, the underlying technology is on an exponential growth curve, much like electronics with a "Moore's Law" like expanding capability.

Planetary Protection and Extraterrestrial Propagation
We're bound to our solar system for the forseeable future; humans are fragile and delicate away from our home planet. But that hasn't stopped Lubin, Rothman, their research teams and their diverse collaborators, which include a radiation specialist and a science-trained theologian, to contemplate both the physiological and ethical aspects of sending life to space - and perhaps even propagating life in space.

"There are the ethics," Lubin explained, "of planetary protection," in which serious thought is given to the possibility of contamination, either from our planet to others or vice versa. "I think if you started talking about directed propagation of life, which is sometimes called panspermia - this idea that life came from elsewhere and ended up on the earth by comets and other debris, or even intentionally from another civilization - the idea that we would purposefully send out life does bring up big questions."

So far, the authors contend, there is no risk of forward contamination, as the probes nearing any other planet would burn up in their atmosphere or be obliterated in the collision with the surface. Because the wafercraft are on a one-way trip, there's no risk that any extraterrestrial microbes will return to Earth.

While still somewhat on the fringe, the theory of panspermia seems to be getting some serious, if limited, attention, given how easy it is to propagate life when conditions are right and the discovery of several exoplanets and other celestial bodies that may have been, or could be, supportive of life as we know it.

"Some people have mused and published on ideas such as 'is the universe a lab experiment from some advanced civilization,'" Lubin said. "So people are certainly willing to think about advanced civilizations. Questions are good but answers are better. Right now we simply ponder these questions without the answers yet."

Another issue currently being contemplated in the wider space exploration community: What are the ethics of sending humans to Mars and other distant places knowing they may never come home? What about sending out small micro-organisms or human DNA? These existential inquiries are as old as the first human migrations and seafaring voyages, the answers to which will likely come the moment we're ready to take these journeys.

"I think we shouldn't, and won't, suppress the exploratory yearning that is intrinsic to our nature," Rothman said.