Laboratory experiments suggest that these worlds have especially gooey interiors 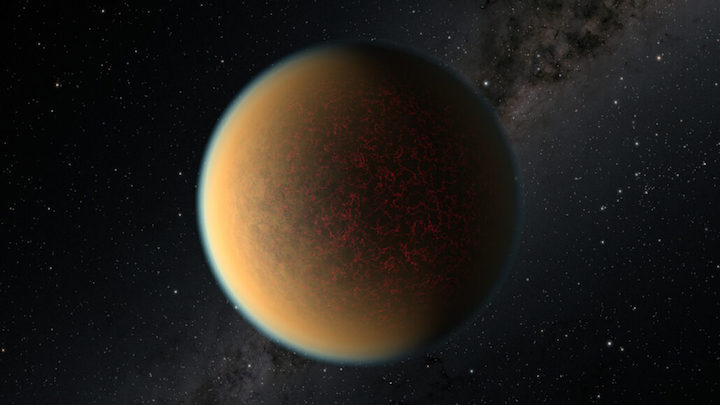 Rocky exoplanets such as GJ 1132b (shown in this artist’s impression) may have volcanoes that spew out gases into the atmosphere. Oxygen-rich rocks in such planets’ interiors could drive the melting of the mantle, possibly fueling geologic activity, a study suggests.

Humble oxygen is more than just a building block of life. The element could also help scientists sneak a peek into the innards of planets orbiting faraway stars, a new study suggests.

Laboratory experiments show that rocks exposed to higher concentrations of oxygen melt at lower temperatures than rocks exposed to lower amounts. The finding suggests that oxygen-rich rocky exoplanets could have a thick layer of soupy mantle, possibly giving rise to a geologically active world, researchers report in the Nov. 9 Proceedings of the National Academy of Sciences.

A gooey interior is thought to have profound effects on a rocky planet. Molten rockdeep within a planet is the magma that powers geologic activity on the surface, like what happens on Earth (SN: 7/31/13). During volcanic eruptions, volatiles such as water vapor and carbon dioxide can fizzle out of the magmatic ooze, setting up atmospheres that are potentially friendly to life (SN: 9/3/19). But the factors that drive mantle melting on Earth aren’t well-understood, and scientists have tended to focus on the role of metals, such as iron.

The impact of oxygen on rock melting has been overlooked, says Yanhao Lin, a planetary scientist at the Center for High Pressure Science and Technology Advanced Research in Beijing. Oxygen is one of the most abundant elements on Earth and probably on rocky exoplanets too, he says. As such, other scientists may have previously thought that it is just too common of an element to play such a literally earthshaking role, adds Lin.

In the new study, Lin and colleagues measured the melting temperatures of synthetic, iron-free basalt rock under rock in two environments: under oxygen-starved conditions and exposed to oxygen-rich air. The team used the faux rock to isolate oxygen’s effect on melting and rule out the effects of iron, which can also influence rock melting.

As the molten rocks cooled to less than 1000° Celsius, the minerals in the oxygenated basalt stayed melted longer than the oxygen-depleted samples, the team observed. The oxygenated rocks consistently solidified at temperatures 100° Celsius lower than their counterparts.

Just as salt lowers the melting temperature of ice, oxygen similarly makes it easier for rocks to melt, the researchers conclude. Lin hypothesizes that oxygen can break up long chains of silicon and oxygen atoms in solid rock, coaxing them to form smaller bits. These fragments are more mobile and can flow more easily compared to the longer, tangly groups.

The degree of oxidation could determine how a young exoplanet’s syrupy insides eventually settle into subterranean layers. A more oxidized and more melt-prone gut at lower temperatures may lead to a smaller solid core, a thicker sludgy mantle and a more metal-deprived crusty shell, the researchers say.

A caveat to the work is that the researchers tested the impact of only oxygen on the melting temperature of rocks. The team has yet to consider other factors such as iron concentration and high pressure, which are also probably part of many real-world exoplanet interiors. These additional factors will further induce melting, Lin predicts.

The findings are “a very good effort,” says planetary scientist Tim Lichtenberg of the University of Oxford who was not involved in the study. Other caveats to mantle melting may surpass oxygen’s contribution, but the new results are still useful, he says. Understanding oxygen’s potential impact, for example, could be valuable for explaining the inner workings and history of any exoplanet that scientists come across in their astronomical observations. That understanding could be even more valuable — and opportune — as scientists prepare to use the newly launched James Webb Space Telescope to probe the atmospheres of other worlds (SN: 10/6/21).

Lab experiments, of course, can’t capture all the nuances of real-life planetary interiors. But the work is necessary to guide — and confirm — the formulation of theories about how certain types of exoplanets came to be, Lichtenberg says. Simulations can then extend the reach of experimental results when combined with other techniques, such as modeling.

“Observations, the modeling and the experiments,” Lichtenberg says, “there’s a trifecta.” These three prongs feed off each other to advance exoplanet science as a whole, long before humankind ever sets foot on such distant worlds.