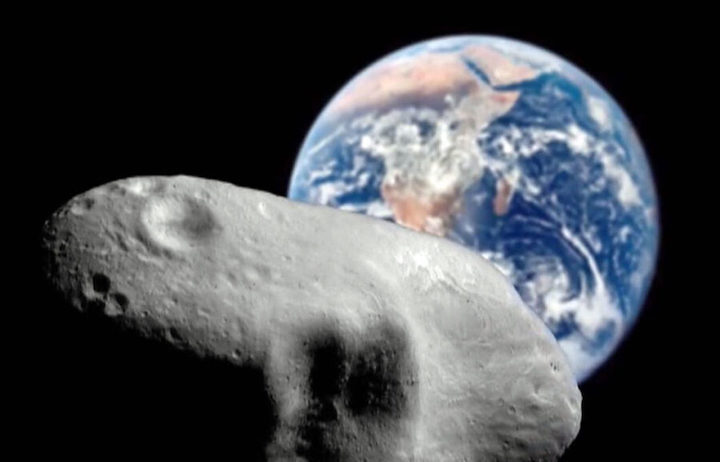 Asteroids routinely pass near Earth, but most range from several to a few dozen meters across and appear faint. Asteroid (7482) 1994 PC1 is considerably larger and brighter and will be making a close approach on January 18th. As seen from the asteroid at that time, the Earth's apparent size will be 23 arcminutes or about two-thirds the apparent size of the Moon. An artist's concept shows an extreme perspective of the scene.
NASA

Asteroid (7482) 1994 PC1 is big and potentially hazardous, meaning that its orbit intersects Earth's. But this time around, the space rock comfortably misses Earth and instead puts on a safe show for small telescope users.

Watching a fast-moving asteroid is a total blast. Once you lock on, you're in the astronomical fast lane, cruising across star fields, making and breaking asterisms with abandon. We're so used to celestial objects moving slowly or not at all. That's what makes observing Earth-approaching asteroids such a treat. You get a taste of what cosmic velocity really means.

Just to be clear, 1994 PC1 poses no danger at this time — it will miss Earth by 1.9 million kilometers (1.2 million miles ) when at closest approach at 4:51 p.m. EST (21:51  UT) on Tuesday, January 18th. That's five times the Earth-Moon separation or roughly the same distance from Earth to NASA's James Webb Space Telescope. This pass will be our closest shave for at least the next 172 years. A comparable but slightly more distant flyby occurs on January 18, 2105, at 2.3 million kilometers.

Asteroid 1994 PC1 measures 1.1 kilometers across. Based on its spectral type, it's a typical S-class or stony asteroid with a silicate composition. Were it to impact our planet, it would excavate a crater about 20 kilometers (12.4 miles) across. The shockwave, fireball, falling debris and powerful tsunamis (assuming an oceanic strike) would create widespread regional havoc and devastation. Fortunately, impacts of this size occur only about once every 500,000 years, leaving enough time (we hope) to find a way to deflect the inevitable, future PHA that has Earth in its crosshairs.

On January 14th, around 10 p.m. EST, our whiz kid is already at magnitude 12.2 and located in the southern constellation Pictor about 8° northwest of Canopus. Three nights later on January 17th, it brightens to magnitude 10.3 and becomes more conveniently placed for northern observers, heading northwest at about 1.5° per hour from Fornax into Eridanus. Watch for it to pass 1.5° northeast of the 9th-magnitude planetary NGC 1360 in Fornax around 7–7:30 p.m. EST.

On the evening of January 18th, asteroid 1994 PC1 comes closer yet but fades a fraction to magnitude 10.4. It tracks across eastern Pisces at the rate of 2.2° per hour or 2.2 arcminutes per minute. That's fast enough to detect its movement in real time, particularly when the asteroid passes close to a star or makes and breaks on-the-spot asterisms with field stars. Higher magnifications (100× or more) will make its apparent motion even more obvious.

Be aware that the Moon will be just past full and shines brightly in Cancer at the same time that the asteroid is best visible. But at magnitude 10–10.5 and with the Moon in the opposite part of the sky, it should still be accessible in a 4-inch telescope. It helps that 1994 PC1 is not only large but also a good reflector of light with an albedo of 0.28 (reflecting 28% of the light it receives from the Sun). That's about the same reflectance as grass or red brick. For comparison, Earth's albedo is 0.37 and the Moon's is 0.12.

The key to finding and following the minor planet is to locate a relatively bright star or star pattern on the map in advance of its arrival . . . and wait. Give yourself at least five minutes to familiarize yourself with the star field, so you can nab the intruder when the time is right. The closest-approaching PHAs move extremely rapidly and can be hard to track. Thankfully, 1994 PC1 isn't one of these speed demons, making it more accessible. It will look similar to a very slow-moving satellite.

The charts here capture the asteroid at its brightest, but it remains above magnitude 13 from January 12–21, putting it within range of an 8-inch (200-mm) scope for more than a week. To stay hot on 1994 PC1's trail, try making your own customized maps. Input its orbital elements into a sky-mapping program such as SkySafari (Android / iOS), Stellarium, or Cartes du Ciel. You'll also find a regularly updated map on Gideon van Buitenen's 1994 PC1 page.

Don't have a scope? Watch a live view of the asteroid online on Gianluca Masi's Virtual Telescope Project site. Tune in starting at 3 p.m. EST (20:00 UT) on January 18th. Enjoy the ride!