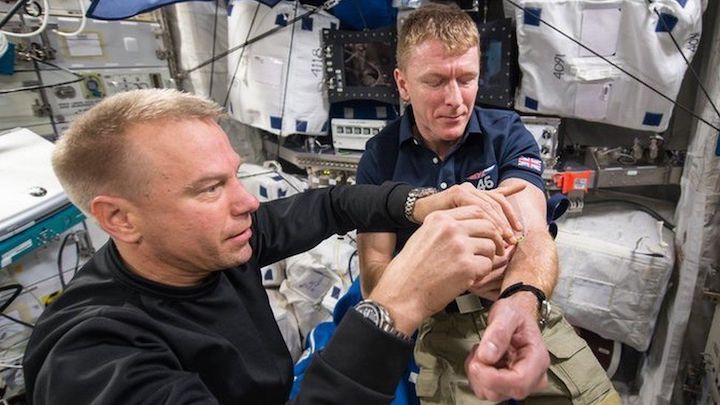 Scientists have discovered more about why space travel makes astronauts anaemic when they return to Earth.

Canadian researchers say 50% more red blood cells are destroyed in space and this continues for however long the mission lasts.

As a result, long voyages to the Moon, Mars and beyond may be a challenge, they say.

But their insights could benefit bedridden patients on Earth with the same condition.

"Space anaemia" is something scientists have known about since the very first missions returned to Earth - but exactly why it happens has been a mystery.

Now a small University of Ottawa study of 14 astronauts - including Britain's Tim Peake - on six-month stays at the International Space Station, has found out more.

Using blood and breath samples taken during their missions, the researchers were able to measure red blood cell loss. These cells carry oxygen from the lungs to all parts of the body - and are the key to life.

"Our study shows that upon arriving in space, more red blood cells are destroyed, and this continues for the entire duration of the astronaut's mission," said Dr Guy Trudel, lead researcher and hospital physician.

Three million red blood cells are destroyed per second in space, compared to two million on terra firma. Fortunately, the body can compensate. If it didn't, astronauts would become very ill in space.

But the researchers are not sure how long the body can be in this constant state of repairing itself, especially if it's in space for a lengthy mission.

Even when astronauts in the study returned to living with gravity there was no quick fix, and a year later they were still found to be losing red blood cells at a higher rate.

Despite this, they were able to function normally. Male and female astronauts were equally affected.

"If we can find out exactly what's causing this anaemia, then there is a potential to treat it or prevent it, both for astronauts and for patients here on Earth," said Dr. Trudel.

He sees the anaemia caused by space travel as being "similar" to that experienced by patients who've spent months inactive in intensive care with illnesses like Covid.

Anaemia also prevents them exercising and recovering, and his team will research how this mechanism works in future studies.

The findings of the Marrow study, published in Nature Medicine, may mean people who take part in space missions to far-off planets would need to adapt their diets to make more iron, as well as eat more calories for energy.

Screening astronauts and space tourists for blood or health conditions affected by anaemia before spaceflight might also be necessary, the researchers say.