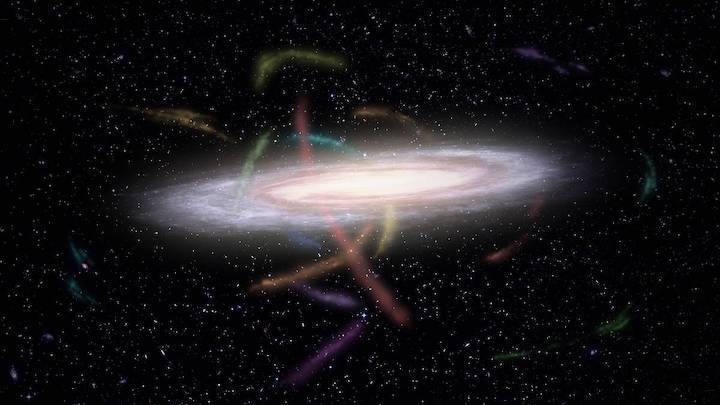 Artist’s representation of our Milky Way Galaxy surrounded by dozens of stellar streams. These streams were the companion satellite galaxies or globular clusters that are now being torn apart by our Galaxy’s gravity. (Credit: James Josephides and S5 Collaboration)

Astronomers are a step closer to revealing the properties of dark matter enveloping our Milky Way galaxy, thanks to a new map of 12 streams of stars orbiting within our galactic halo.

Publishing in the American Astronomical Society’s Astrophysical Journal, an international team of collaborators have described the richest collection of stellar streams ever concurrently studied.

Their work forms part of a dedicated program – the Southern Stellar Stream Spectroscopic Survey (S5) – that aims to probe the secrets of these streams: the shredded remains of neighbouring small galaxies and star clusters that are being torn apart by our own Milky Way.

Understanding these star streams is very important for astronomers. They are key to revealing the presence of the invisible dark matter that hold stars in their orbits throughout our galaxy.

“Think of a Christmas tree,” says co-author Professor Geraint F. Lewis of the University of Sydney. “On a dark night, we see the Christmas lights, but not the tree they are wrapped around. But the shape of the lights reveals the shape of the tree. It is the same with stellar streams – their orbits reveal the dark matter.”

But streams can let us see more than the hidden bulk of the Milky Way. They can also tell the story of how our gluttonous galaxy grew over billions of years by shredding and consuming smaller stellar systems in its path.

“As our galaxy is getting older, it is getting fatter,” says Professor Ting Li from the University of Toronto, Canada, and the lead author of the paper. “This study gives us a snapshot of the Milky Way’s feeding habits, such as what kinds of smaller stellar systems it eats.”

The researchers are using their observations to build a picture of what our galaxy has been gobbling up as it grows.

“Stellar streams can come either from disrupting galaxies or star clusters,” says Professor Alex Ji at the University of Chicago, a co-author on the study. “These two types of streams provide different insights into the nature of dark matter.”

Li says these new observations are essential for determining how our Milky Way arose from the featureless universe after the Big Bang.

“For me, this is one of the most intriguing questions, a question about our ultimate origins,” she says. “It is the reason why we founded S5 and built an international collaboration to address this.”

Li and her team are the first group of scientists to study such a rich collection of stellar streams, measuring the speeds of stars using the Anglo-Australian Telescope (AAT), a four-metre optical telescope at Siding Spring in NSW.

Unlike previous studies that have focused on one stream at a time, “S5 is dedicated to measuring as many streams as possible, which we can do very efficiently with the unique capabilities of the AAT,” says co-author Professor Daniel Zucker of Macquarie University.

A crucial ingredient for the success of S5 were observations from the European Gaia space mission. “Gaia provided us with exquisite measurements of positions and motions of stars, essential for identifying members of the stellar streams,” says Dr Sergey Koposov, reader in observational astronomy in the University of Edinburgh and a co-author of the study.

These are just the first steps for the team, and Li believes further studies into stellar streams promise to deepen our understanding of the galaxy we call home.

“Over the next decade, there will be a lot of dedicated studies looking at stellar streams,” Li says. “We are trail-blazers and pathfinders on this journey. It is going to be very exciting!”