This would mean the two stars "spun down" for a second before collapsing into black hole. 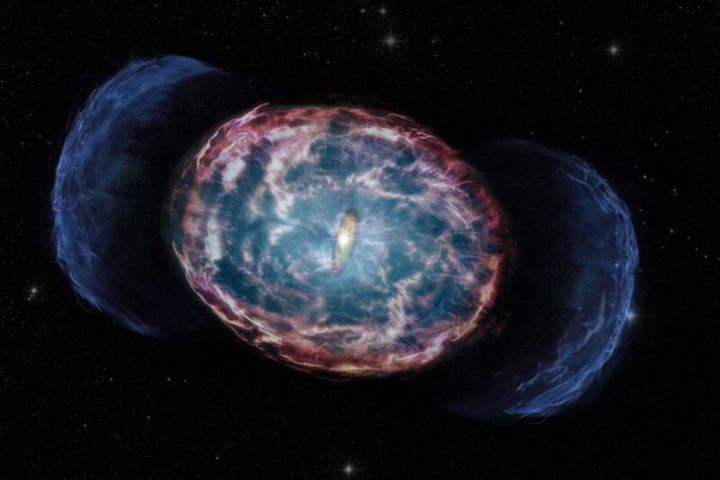 Artist's representation of the merger of two neutron stars to form a black hole (hidden within bright bulge at center of image). The merger generates opposing high-energy jets of material (blue) that heat up material around the stars, making it emit X-rays (reddish clouds).

Back in 2017, astronomers detected a phenomenon known as a "kilonova": the merger of two neutron stars accompanied by powerful gamma-ray bursts. Three and a half years later, astrophysicists spotted mysterious X-rays they believe could be the very first detection of a kilonova "afterglow," according to a new paper published in The Astrophysical Journal Letters. Alternatively, what the astrophysicists saw could be the first observation of matter falling into the black hole that formed after the merger.

As we've reported previously, LIGO detects gravitational waves via laser interferometry. This method uses high-powered lasers to measure tiny changes in the distance between two objects positioned kilometers apart. (LIGO has detectors in Hanford, Washington, and in Livingston, Louisiana. A third detector in Italy, known as Advanced VIRGO, came online in 2016.) Having three detectors means scientists can triangulate and better pinpoint where in the night sky any telltale chirps are coming from.

In addition to seven more binary black hole mergers, LIGO's second run, from November 30, 2016, to August 25, 2017, detected a binary neutron-star merger with a simultaneous gamma-ray burst and signals in the rest of the electromagnetic spectrum. The event is now known as GW170817. These signals included the telltale signatures of heavy elements—notably gold, platinum, and uranium—created by the collision. Most lighter elements are forged in the death-throe explosions of massive stars known as supernovas, but astronomers have long theorized that the heavier elements might originate in kilonovas produced when two neutron stars collide.

The 2017 detection of the kilonova provided evidence that those astronomers were right. Recording this kind of celestial event was unprecedented, and it officially marked the dawn of a new era in so-called "multi-messenger astronomy."

Ever since, astronomers have been looking for a corresponding optical signature whenever LIGO/VIRGO picks up a gravitational wave signal for neutron star mergers or possible neutron star-black hole mergers. The assumption had been that black hole-black hole mergers would not produce any optical signature, so there was no point even looking for one—until 2020. That's when astronomers found the first evidence of just such a phenomenon. The astronomers made the discovery by combining gravitational wave data with data collected during a robotic sky survey.

But the 2017 kilonova remains unique, according to Aprajita Hajela, the lead author of the new paper and a graduate student at Northwestern University. Hajela calls the kilonova "the only event of its kind" and "a treasure chest of several first observations in our field." Along with other astronomers at Northwestern and the University of California, Berkeley, she has been monitoring the evolution of GW170817 since LIGO/Virgo first detected it by using the space-based Chandra X-ray Observatory.

Chandra first detected X-ray and radio emissions from GW170817 a couple of weeks after the merger, which persisted for 900 days. But those initial X-rays, powered by a jet resulting from the merger moving close to the speed of light, started to fade in early 2018. However, from March 2020 through the end of that year, the steep decline in brightness stopped, and the X-ray emission became fairly constant in terms of brightness.

To help resolve the mystery, Hajela and her team collected additional observational data with both Chandra and the Very Large Array (VLA) in December 2020, 3.5 years after the merger. It was Hajela who was awakened at 4 am by a notification of surprisingly strong and bright X-ray emissions—four times higher than would be expected at this point if the emission were powered solely by the jet. (The VLA didn't pick up any radio emissions.) These new emissions have remained at a constant level for 700 days.

That means a completely different source of X-rays must be powering them. One likely explanation is that expanding debris from the merger generated a shock wave, akin to a sonic boom, in addition to the jets. In that case, the merged neutron stars could not have immediately collapsed into a black hole. Instead, the stars spun down rapidly for a second. That rapid spin would have briefly counteracted the gravitational collapse just long enough to produce a fast tail of heavy kilonova ejecta, which drove the shock wave. As that heavy ejecta decelerated over time, its kinetic energy was converted into heat by the shocks.

“It would just fall in. Done.”

"If the merged neutron stars were to collapse directly to a black hole with no intermediate stage, it would be very hard to explain this X-ray excess that we see right now, because there would be no hard surface for stuff to bounce off and fly out at high velocities to create this afterglow," said co-author Raffaella Margutti of the UC Berkeley. "It would just fall in. Done. The true reason why I'm excited scientifically is the possibility that we are seeing something more than the jet. We might finally get some information about the new compact object."

Brian Metzger of Columbia University proposed an alternative scenario: the X-ray emission could be powered by matter falling into the back hole that was formed during the merger. This is also a scientific first, according to Hajela, since this kind of long-term accretion has never been observed before.

There are more observations planned going forward, and that data will help resolve the issue. If the X-rays and radio emissions brighten over the next few months or years, this would confirm the kilonova afterglow scenario. If the X-ray emissions decline steeply or remain steady, with no accompanying radio emission, that would confirm the accreting black hole scenario.