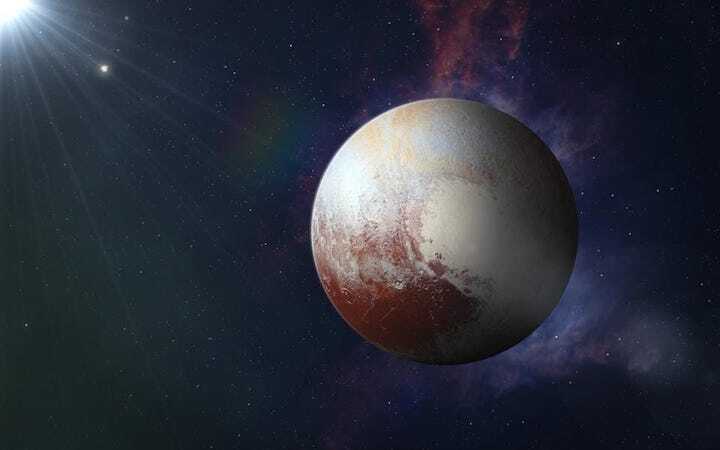 Should NASA go back to Pluto? Photographed for the first time, from 7,800 miles away, on July 14, 2015 by NASA’s nuclear New Frontiers spacecraft, some think the dwarf planet now needs a dedicated orbiting spacecraft to unravel its icy mysteries.

Cue Persephone (Per-seff-on-ee), a mission concept to study Pluto and two distant Kuiper Belt Objects (KBOs)—in the beyond-Neptune disc of the outer Solar System—involving a cruise to the dwarf planet that could take over 27 years.

However, the proposed mission—which would launch on NASA’s SLS rocket and cost about $3 billion—could blow wide-open the possibilities for finding life elsewhere in the universe, according to the scientists behind it.

The key question that Persephone would answer: does Pluto have an ocean?

Here’s everything you need to know about the Persephone mission:

What is the Persephone mission?

Persephone is a concept for a total 30.7-year mission study to both orbit within the Pluto system and encounter a couple of KBOs. The latter is something achieved only once when New Horizons visited Arrokoth in 2019.

The paper is now being considered by the National Academies, which will soon publish its once-per-decade Planetary Science and Astrobiology Decadal Survey covering the years 2022 through 2032. It will identify what space missions NASA should start planning for.

How long would it take to get to Pluto?

It took New Horizons 9.5 years to reach Pluto from 2006 through 2015, but the Persephone mission could take over 27 years.

“Getting a mission into the Pluto system to orbit it and its moons is a very difficult thing to do because Pluto is a long way away,” said Dr. Carly Howett, the Principal Investigator of the Persephone mission concept, a planetary physicist and Associate Professor of Space Instrumentation in the University of Oxford’s Department of Physics. “To get there slow enough so you can go into orbit means a very long cruise time, but the faster you go the more you have to break.” In the latter scenario, both accelerating and breaking take more fuel—so a bigger, more expensive mission. It’s a delicate balance complicated by the fact that a more advanced power source is required because current radioisotope thermoelectric generators (RTGs) won’t last for 30+ years.

Either way it’s somewhere between 18 and 27 years to get to Pluto if you want to go into orbit. “So we’re talking a full childhood of cruise time, not including any development time and operations,” said Howett. “So it’s going to take a very long time—but that doesn’t mean it’s not worth doing.”

Why do we need to go back to Pluto?

A key finding of the New Horizons mission was that Pluto is a geologically active world. “It’s no bigger than the continental U.S. and it’s located 40 times further from the Sun than the Earth, so you would expect it to be dead, cold and lifeless,” said Howett. “Instead, we saw evidence for activity, which is mind-boggling.”

Why Pluto is active despite being so far from the Sun—and why it contains liquid water—are the central questions Persephone could answer. “In order to answer that you really have togo into orbit because you can’t get enough information on a single flyby,” said Howett. “You need to understand the gravity signature and the only way to do that is to orbit it and then see how it pulls on the spacecraft time and time and time again.”

What would the Persephone mission do?

The mission would have three main science questions about Pputo:

The orbiter would have 11 scientific instruments on board, including a couple of low-light cameras (there’s not much sunlight out at Pluto) and a thermal camera.

Why isn’t Pluto a planet now?

A meeting of the International Astronomical Union (IAU) in August 2006 voted to downgrade the then-ninth planet to mere “dwarf planet” status. Yes, astronomers—not planetary scientists. They created a tighter, more exclusive definition of a planet after a flurry of new discoveries of small planets in the outer Solar System—notably Eris in 2005 as well as Haumea, Makemake and Sedna (and Ceres)—threatened to increase the Solar System’s planet-count to dozens, if not hundreds. The definition of a planet. according to the IAU, is:

Whether you agree or not with the new definition of Pluto as a dwarf planet, that IAU decision was bad for astronomy’s reputation. It’s since been regarded as a subject where one can have an opinion, rather than it being based solely on facts. It’s also led to the use of that very word—planet—to virtually drop out of use. Now we hear about worlds—icy worlds, ocean worlds and volcanic worlds—where once we used to differentiate between objects.

When was Pluto discovered?

Flagstaff, Arizona is often called the “Home of Pluto” because Lowell Observatory was where Clyde Tombaugh discovered it on February 18, 1930. It’s also where Jim Christy detected Pluto’s largest moon, Charon, in 1978, where Pluto’s atmosphere was first observed in 1988 and where the first maps of Pluto’s surface were created a decade later. It’s also the venue for the annual “I Heart Pluto” festival every February.