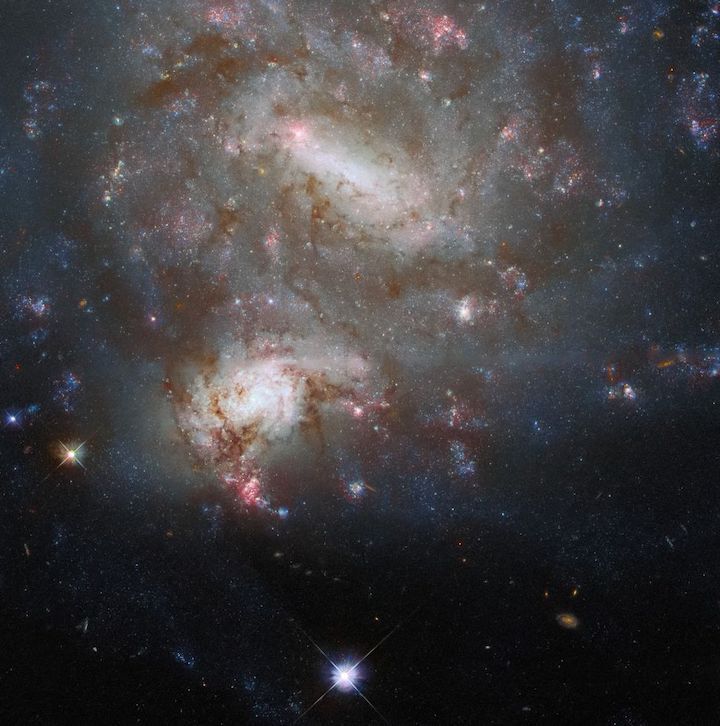 The twin galaxies NGC 4496A and NGC 4496B located in the constellation Virgo. (Image credit: NASA/ESA/Hubble/T. Boeker/B. Holwerda/Dark Energy Survey/DOE/FNAL/DECam/CTIO/NOIRLab/NSF/AURA/SDSS)

The Hubble Space Telescope captured the barred spiral galaxy NGC 4496A and the spiral galaxy NGC 4496B. The two galaxies only appear to overlap due to a chance alignment — in reality, they are actually located incredibly far apart. NGC 4496A is 47 million light-years from Earth, while NGC 4496B is 212 million light-years away, according to a statement from the European Space Agency (ESA).

"Chance galactic alignments such as this provide astronomers with the opportunity to delve into the distribution of dust in these galaxies," ESA said in the statement.

"Galactic dust adds to the beauty of astronomical images — it can be seen in this image as the dark tendrils threading through both NGC 4496A and NGC 4496B — but it also complicates astronomers' observations," ESA added.

That's because the galactic dust absorbs starlight and re-radiates it at longer wavelengths, which, in turn, makes the stars in the galaxy appear dimmer. Astronomers refer to this process as "reddening," which occurs when radiation emissions are altered by light scattering off dust or other interstellar matter.

The image, which ESA shared Feb. 28, highlights the dark, curling tendrils of dust and gas that obscure the bright central region of both galaxies. Using the new Hubble data, astronomers were able to measure the influence these dusty tendrils — a telltale structure of spiral galaxies — have on the starlight in NGC 4496A and NGC 4496B.

"By carefully measuring how starlight from background galaxies is affected by dust in intervening galaxies, astronomers can map out where the dust is in the foreground galaxy's spiral arms," ESA said in the statement. "The resulting 'dust maps' help astronomers calibrate measurements of everything from cosmological distances to the types of stars populating galaxies."