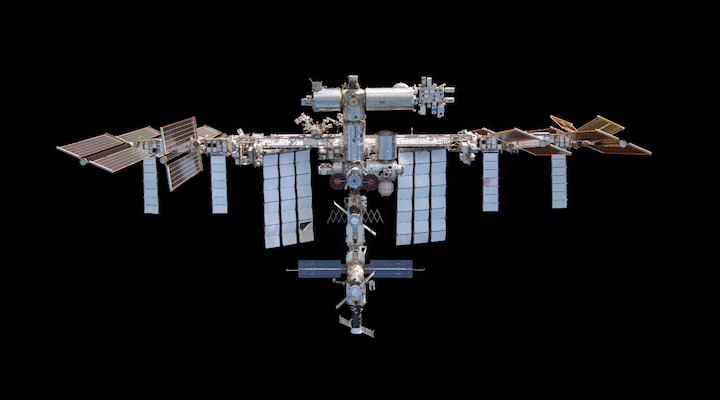 The International Space Station (ISS) has emerged from the month of February 2022 on shakier ground than when it entered the month from a geopolitical standpoint based on events taking place 425 kilometers below it.

Even with escalating tensions leading to the invasion of Ukraine, the month of February saw progress in the scientific experiments performed aboard the station — even with a few normal issues that required crew attention.

Throughout February, and especially in recent days, NASA remained assured that the successful and safe operation of the ISS would and will continue.

Kathy Lueders, Associate Administrator, Space Operations Mission Directorate, NASA, noted in a press conference on February 28 that NASA has not seen anything from their Russian flight control partners that would suggest any disruption to the normal operations of the station.

Lueders’ comments are in stark contrast to Roscosmos chief Dmitry Rogozin, who alternated in the last days in February on Twitter between comments of how the US and Europe would not be able to prevent the ISS from deorbiting or to continue operating without Russian spacecraft or modules, and casting dispersions at Boeing’s Starliner crew capsule.

Despite the growing tensions that pervaded the month, they did not prevent Roscosmos from continuing routine operations — including rebooting the ISS. 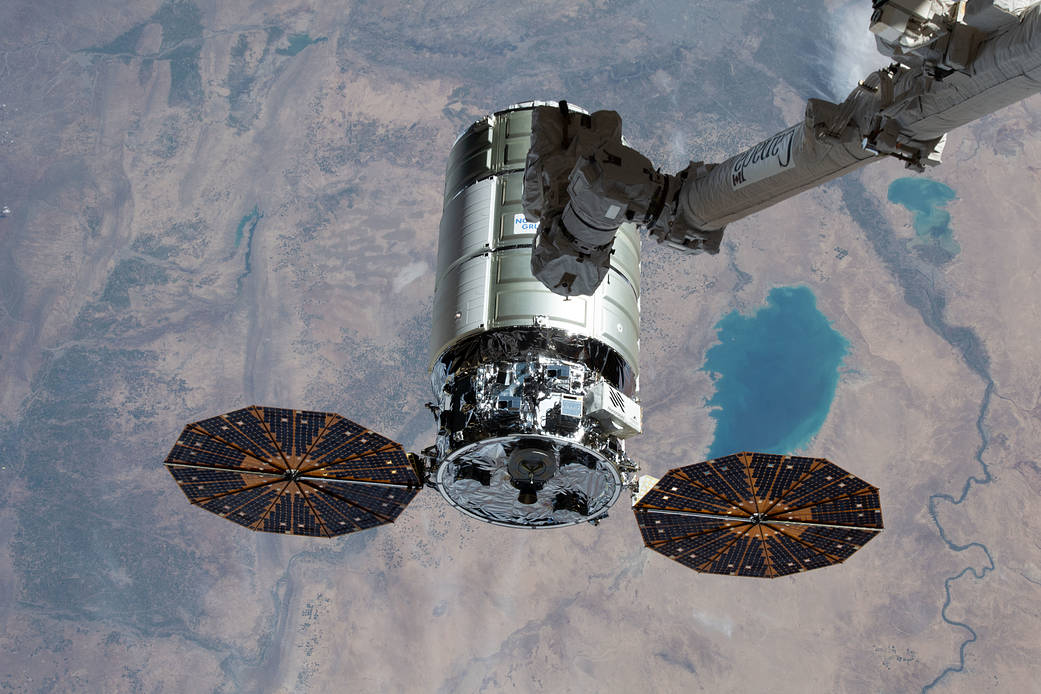 Northrop Grumman’s Cygnus space freighter is pictured moments away from being captured with the Canadarm2 robotic arm. (Credit: NASA)

Using Progress MS-18, Roscosmos was originally set to perform a reboost on Sunday, February 6, but this was canceled “due to violation of Flight Rule B4-4, which states that for a planned reboost, the post-burn trajectory must be clear of conjunctions within 48 hours of the maneuver.”

This was found not to be the case, and the reboost was rescheduled for and ultimately conducted on Tuesday, February 8 instead. The maneuver imparted +0.26 m/s of velocity along the prograde vector to properly align the ISS for the upcoming Soyuz launch and landing opportunities in March.

March will see the launch of the all-Russian Soyuz MS-21 mission to the ISS on the 18th, followed on March 28 with the departure and landing of Soyuz MS-19.

Likewise, the situation on the ground did not prevent the ISS from continuing to function in its primary role, that of a scientific research platform across a variety of fields. However, there were a few issues with experiment racks and support systems for those experiments that needed crew tending in February.

February saw three minor issues with the ExPRESS racks on the United States Operating Segment (USOS) of the ISS — of which NASA, CSA, ESA, and JAXA are a part.

ExPRESS stands for EXpedite the PRocessing of Experiments to the Space Station, a multipurpose payload rack system that supports and stores research experiments aboard the station.

In February, the crew continued Basic ExPRESS Rack (ER) 11B troubleshooting from a January 26 event in which ER11B “lost health and status believed to be due to either a failed Biological Research Project Solid State Power Controller Module (BSSPCM) or Ballard Box,” noted a NASA ISS Status update.

The crew identified the cause of the problem by connecting the Ballard Box to an ExPRESS Rack laptop so ground controllers could better understand the state of the BSSPCM and Ballard Box on February 3.

According to NASA, “Data confirmed that the BSSPCM was functioning nominally. The Ballard Box was confirmed to be on and stuck in a continuous reboot cycle during boot up. Ground team was successful in getting Ballard Box out of reboot state. ER11B was then deactivated. Ground teams are assessing the configuration to determine if it is possible to recover the Ballard Box.”

That troubleshooting led to the understanding that a Single Event Upset was the cause of the issue, and the crew was instructed to reload the flash memory “using the Trivial File Transfer Protocol Server application.”

These efforts proved successful, with ER11B returning to nominal and in a good state on February 10.

Meanwhile, ER10B, hosting the Biological Research Program, tripped due to an overcurrent in Spaceborne Computer 2 (SBC2). 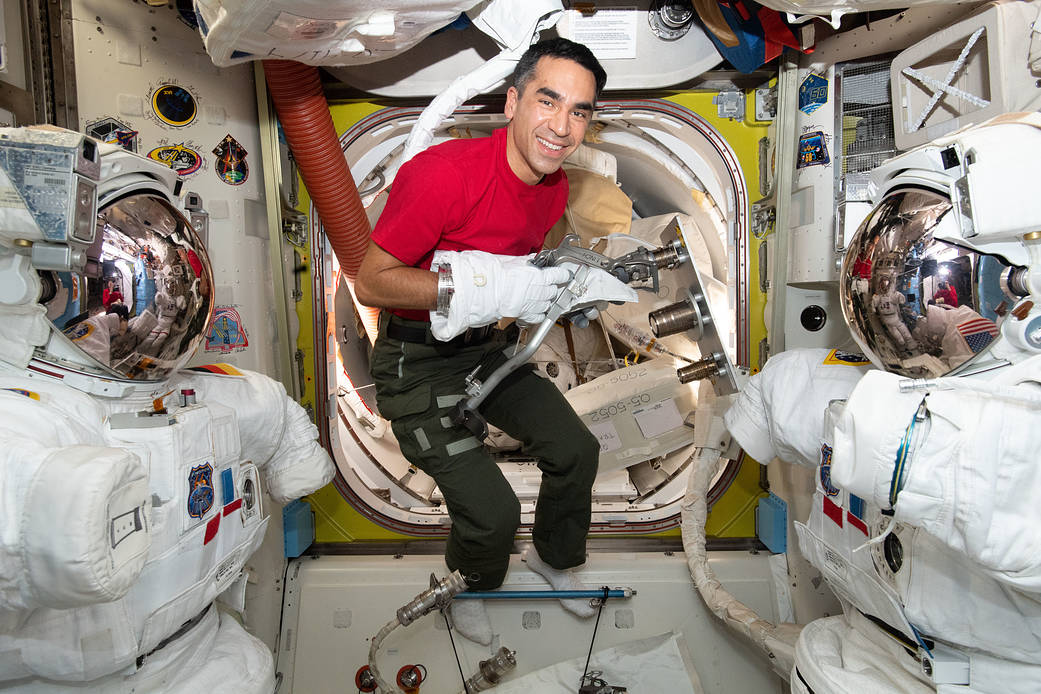 It wasn’t all science maintenance in February. Raja Chari tests tools while wearing a spacesuit glove inside the Station’s Quest airlock. (Credit: NASA)

According to a NASA status update, “Several minutes prior to the trip, the BSSPCM had declared a converter imbalance. This behavior has been seen twice before, and payload regulations allow for two attempts to reset an overcurrent trip on this payload and return to nominal operations.”

February also saw ER9B present a false fire indication in the Columbus module’s Forward 2 rack bay. Upon activation of the alarm, the rack was automatically unpowered, and the crew reported no signs of smoke with “the Compound Specific Analyzer – Combustion Products (CSA-CP) readings all zero inside the module and the rack.”

A review of data from the station’s onboard systems indicated that the smoke detector inside the rack “spiked from a nominal baseline reading to 100% obscuration at the time of the event — a common signature for dust contamination.”

The false signature likely traces to crew work with the Veggie payload, as they were refilling the plants’ water supplies at the time of the alarm activated. Given that air from the growth area of the plants is discharged into the module, this could have allowed the obscuring event that triggered the alarm.

Elsewhere on the ISS, and not involving an issue, the Fluids Integrated Rack Vacuum Exhaust System saw the LAB1S4 Rack Isolation Valve opened for the first time for the Flow Boiling and Condensation Experiment (FBCE). 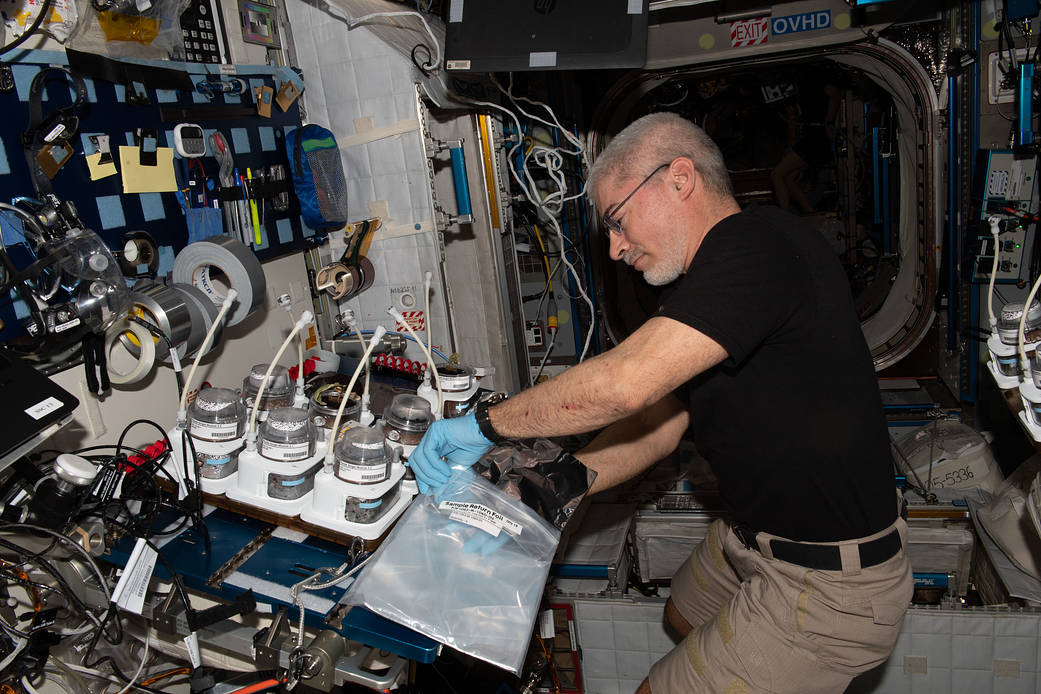 FBCE is a two-phase boiling/condensation facility, and NASA noted that all systems performed as expected during the process.

At the same time this was taking place, the crew also worked with the Cold Atom Lab, specifically its internal thermal control system which was discovered on February 12 to be leaking. The crew inspected the leak, with observations noting 5 mL of water leaking over a 24-hour period after initial cleanup.

Despite the leak, scheduled scientific runs with the instrument were permitted to continue, with repair work to be attempted once the scientific investigations are complete at the end of March.

Lastly, in terms of science maintenance interactions from the crew, the Life Sciences Rack (LSR) returned an incorrect command during activation on February 11 which required investigation. 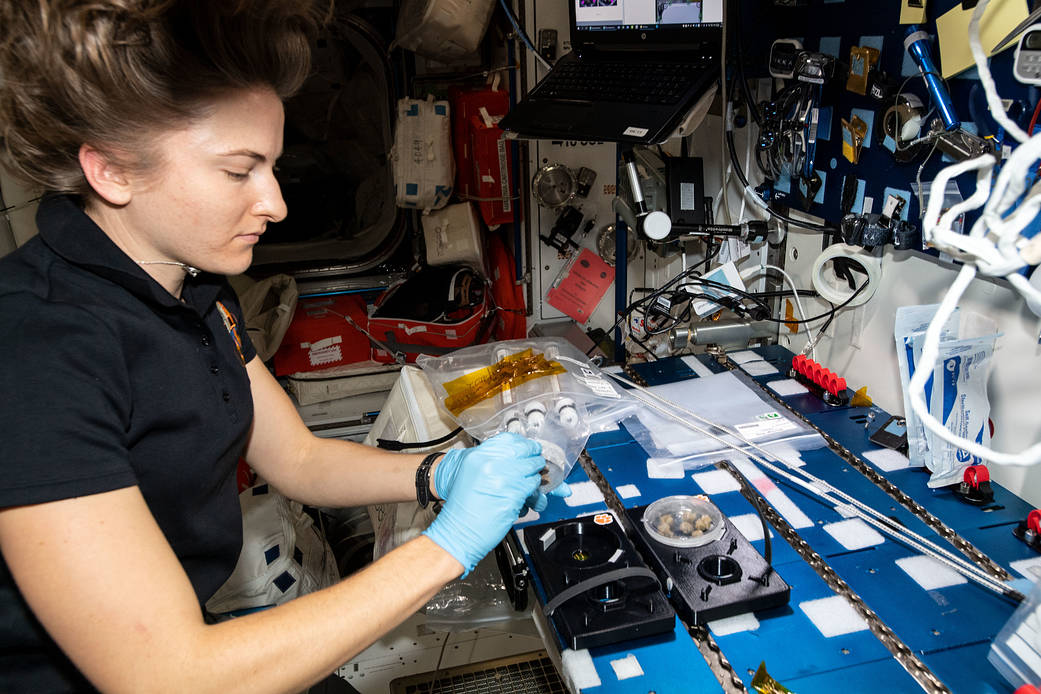 According to NASA, “During LSR activation, the main Remote Power Controller (RPC) was closed per the plan. However, during the next step when the Auxiliary Power RPC was commanded to ‘closed,’ the aux power to the Material Science Research Rack (MSRR) was applied rather than to the LSR as expected.”

“As this was an unexpected configuration, teams commanded the MSRR to be disconnected from power. Teams determined an error in the command structure where RPC ‘Closed’ commands (power applied) are swapped between MSRR and LSR while the RPC ‘Open’ commands (power removed) are correct.”

The unexpected power had no effect on MSRR hardware or ongoing experiments.