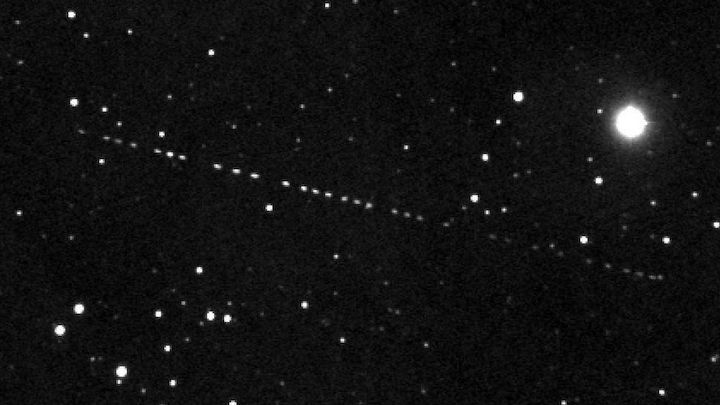 A discarded part of a rocket should have crashed into the Moon's far side by now, say scientists who were expecting the impact at 12:25 GMT.

The three-tonne rocket part had been tracked for a number of years, but its origin was contested.

At first, astronomers thought it might have belonged to Elon Musk's SpaceX firm, and then said it was Chinese - something China denies.

The effects of the impact on the Moon should have been minor.

The rocket stage would have dug out a small crater and created a plume of dust.

Scientists hope to get confirmation in the coming days, or weeks.

The rocket part was first sighted from Earth in March 2015. A Nasa-funded space survey in Arizona spotted it, but quickly lost interest when the object was shown not to be an asteroid.

The rocket part is what's known as "space junk" - hardware discarded from missions or satellites without enough fuel or energy to return to Earth.

Some pieces are closer to us, just above the Earth, but others, like this booster, are thousands of kilometres away in high orbit, far from the Earth's atmosphere.

The European Space Agency estimates there are now 36,500 pieces of space junk larger than 10cm.

No space programme or university formally tracks deep space junk. Monitoring space is expensive and the risks to humans from high-orbit debris are low.

So, it falls to a tiny handful of volunteer astronomers who spend their free time making calculations and estimating orbits. They fire emails and alerts back and forth, asking whoever is in the best location on the planet to spot an object in space.

Six weeks after the booster was first seen, Peter Birtwhistle, 63, was watching the skies for asteroids from his garden in Newbury, in the south of England.

His telescope picked up a tiny dot of light tracking across the sky. Calculations suggested it was part of a rocket, he told BBC News.

Space junk drops in and out of view, often unpredictably. For seven years, he barely saw the rocket part - until in January, it reappeared.

"I grabbed some images when it passed close to Earth," he explained.

He sent his pictures to astronomer and data scientist Bill Gray, on the east coast of the United States. He is the expert who went on to identify it as a SpaceX booster heading for the Moon.

News that a discarded part of one of billionaire Mr Musk's space missions was going to strike the Moon made global headlines.

But tracking space junk is often "detective work," Mr Gray explains. The rocket insignia cannot be seen - astronomers have to piece together its identity by tracking its route backwards through space. They then match its orbit to dates and locations of rocket launches and trajectories.

But some space missions, including China's, don't publicise their routes.

"For a Chinese mission, we know the launch date because they are televised. So I take a guess that it's going to get to the Moon - usually in four or five days. Then I compute an approximate orbit," Mr Gray explains.

And sometimes he makes mistakes. Weeks after the SpaceX identification, another observer sent Mr Gray new data, revealing that his identification was impossible.

He ran the numbers again and concluded it was the third stage of a rocket from China's lunar mission Chang'e 5-T1, launched in October 2014.

China denied this, saying the upper-stage had re-entered the Earth's atmosphere and burned up.

Mr Gray is sticking to his prediction. He believes China has mixed up the tracking of two rocket parts. "I'm 99.9% sure it's the China 5-T1," he says.

In reality, we will never be sure.

Prof Hugh Lewis, from University of Southampton, says the scientific value of tracking deep space junk is limited. But he says it's important to "keep an eye on what's there", especially as human settlement in space becomes more likely.

"It's the mess we've created. Objects that we think are safe can actually return to Earth unexpectedly," he says.

Wherever it came from, no-one will have witnessed the booster's last moments.

Evidence of what happened won't come until two satellites that orbit the Moon pass over the projected impact site and photograph the resulting crater feature.

And as the booster broke into thousands of pieces, much of the physical evidence of its true origins will be lost, too. The best we've got are the estimates made by Mr Gray and the volunteer astronomers watching the skies.