Four years after one experiment found tentative signs of the “cosmic dawn,” the era of the first stars, another experiment finds nothing. 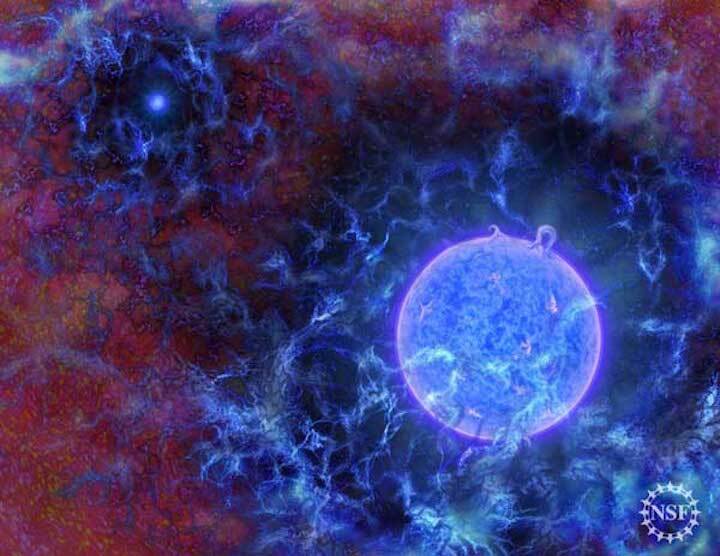 Artist's rendering of the first stars in the universe.
N.R.Fuller / National Science Foundation

For years astronomers have been searching for the elusive signal of the “cosmic dawn,” created when the first stars began shining only 100–200 million years or so after the Big Bang. It’s a difficult detection to make —radio waves emitted by the Milky Way, human technology, and the detectors themselves all swamp what we expect to see from the universe’s infancy.

So when a team announced four years ago that they’d perhaps done it, they made some waves — all the more so because their detection suggested a chillier early universe than we’d expected.

Now, a study published in Nature Astronomy contradicts the earlier finding, claiming the signal, whatever it was, didn’t come from the stars.

We don’t have telescopes right now that can detect the universe’s first stars directly. So to see the cosmic dawn, astronomers have turned instead to hydrogen gas. Not only does hydrogen make up stars, it surrounds them too: Sparse, spread-out hydrogen makes up the majority of the interstellar and intergalactic medium. As the first stars collapsed and began to shine, their intense ultraviolet radiation kicked out the atoms’ electrons, creating bubbles of ionized hydrogen that only expanded as galaxies grew. This era is called the cosmic dawn or the epoch of reionization.

Astronomers are working to make out this Swiss-cheese arrangement by the absorption of the Big Bang’s afterglow. Ionized hydrogen will absorb this glow at 21 centimeters, an already-long wavelength that then becomes even longer as it travels through the expanding universe toward our detectors. By the time this emission reaches Earthbound detectors, it’s in the low-frequency radio regime, around 70 MHz.

Detecting such low frequencies requires special detectors. In 2018, Judd Bowman (Arizona State University) and colleagues published a result from the Experiment to Detect the Global Epoch of reionization Signature (EDGES), a table-shaped detector that sits at the Murchison Radio-astronomy Observatory in Western Australia. They found a tentative absorption signal at 78 Mhz, indicating that the first stars were ionizing the universe’s hydrogen gas a mere 180 million years after the Big Bang.

KEY QUESTION: CAN RESULTS BE REPLICATED?

But while the timescale seemed on track with expectations, the depth of the absorption indicated a colder infant universe than cosmologists had predicted, suggesting some non-standard physics was at play.

Bowman knew the unexpected and preliminary result would need confirmation. He pointed Sky & Telescope to two then-upcoming studies that had the potential to confirm the signal: the Large-aperture Experiment to Detect the Dark Ages (LEDA) and the Shaped Antenna Measurement of the Background Radio Spectrum (SARAS). The most recent LEDA result didn’t end up covering the same frequency as EDGES. But the results from SARAS 3 did, and they not only don’t confirm the signal, but they also suggest it never existed to begin with.

SARAS is a unique experiment, a radio antenna designed to float on large bodies of water (all lakes in Southern India) that shield it from background noise. After collecting data in January through March of 2020, the team then commenced analysis, ultimately finding no signal at 78 MHz. Saurabh Singh (Raman Research Institute, India) and colleagues suggest the EDGES "signal" in fact came from unevenly distributed ground beneath the detector.

"These are very challenging measurements," Bowman says. "Many of the possible systematic issues that could have affected EDGES may also affect SARAS. We still have more work ahead to reach the final outcome."

Managing background noise is crucial to obtaining trustworthy results. SARAS aims to do minimize noise by floating on water. Bowman says that the EDGES team is also planning to deploy a new version of the experiment in Western Australia as well as exploring other locations, with a goal of improving the instrument's performance and calibration.

Another option entirely is a space mission, either in orbit or on the farside of the Moon, which would have the potential to finally detect a clean, true signal from the cosmic dawn.