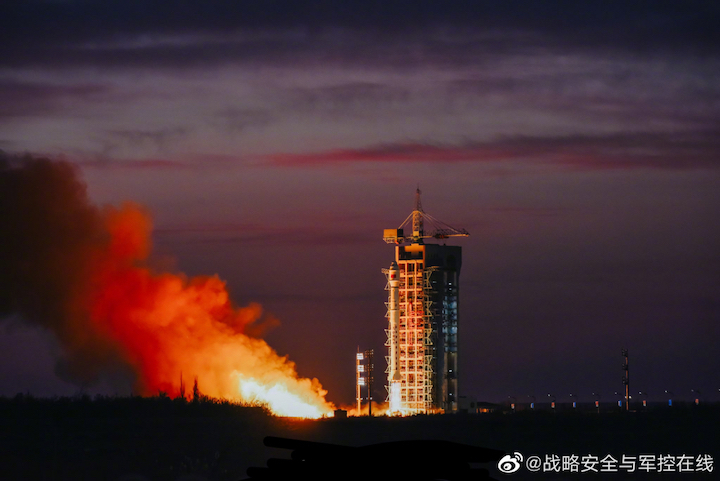 Saturday’s launch of the Ludi Tance-1 01B satellite, also known as L-SAR 01B, follows on from the launch of Ludi Tance-1 01A at the end of January. The two spacecraft are the first to launch for a new Chinese civilian radar imaging constellation deployed in low Earth orbit.

The Ludi Tance satellites use synthetic aperture radar (SAR) to image the Earth in all weather conditions, day or night. The satellites transmit L-band radio signals and record the echo as they are reflected from the surface of the Earth. By taking a series of measurements as it passes over an area of interest, a satellite can produce higher-resolution images with a relatively small antenna. The SAR payload on Ludi Tance-1 01B includes an antenna with an area of around 33 square meters.

Because they use radio waves transmitted from the satellite itself to illuminate a target rather than sunlight, SAR satellites are not constrained to only produce images on daytime passes over points of interest. In addition, the ability of radio waves to pass through clouds also means that a SAR system can produce useful images in overcast conditions where an optical imaging satellite would only be able to see the tops of the clouds.

The stated objectives of the Ludi Tance satellites are to aid in resource monitoring, mapping, and disaster management. They are part of China’s National Civil Space Infrastructure Development Plan for 2015 to 2025. 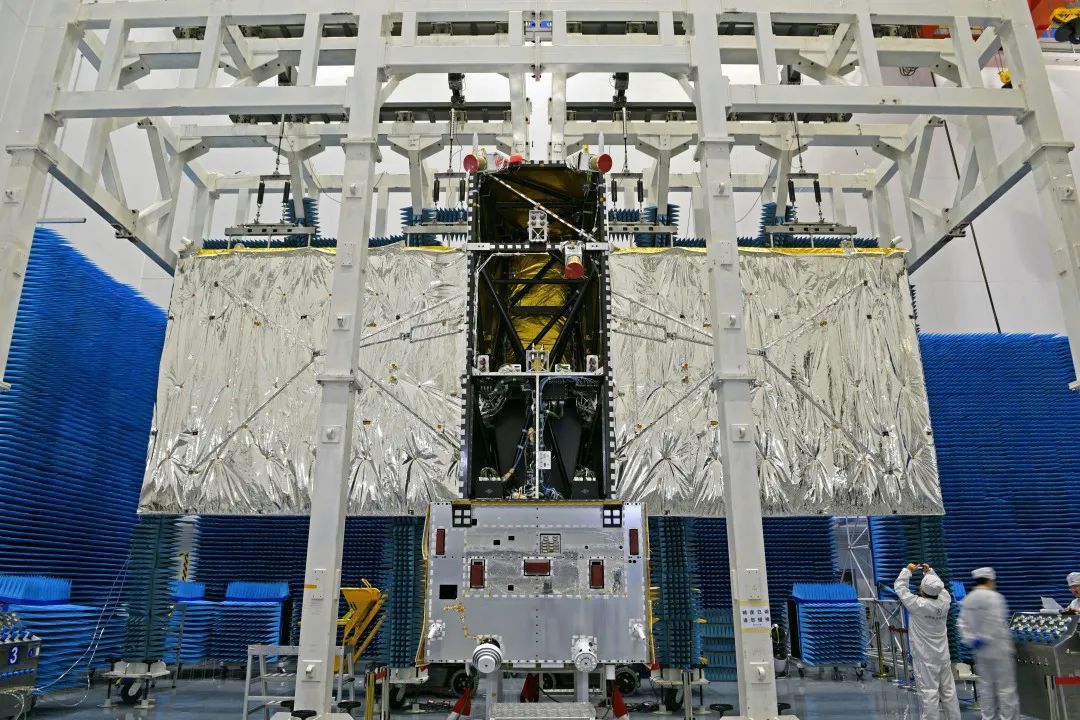 A Ludi Tance satellite undergoing preparations prior to launch

With their roots in China’s missile program, the Chang Zheng rockets use storable hypergolic propellants: unsymmetrical dimethylhydrazine oxidized by dinitrogen tetroxide. This combination was common in early ballistic missiles as the propellants could be stored at ambient temperatures, meaning missiles could remain fuelled and on alert for extended periods of time. The fuel and oxidizer also ignite on contact, simplifying engine design as complex igniter systems are not required. In modern missiles, they have largely been supplanted by solid-fuelled motors.

However, hypergolic propellants are extremely toxic and harmful to the environment and are less efficient than the propellants used on typical purpose-designed orbital rockets. These factors, combined with the age of the Dongfeng 5-based designs, have led to China developing a next-generation of Chang Zheng rockets to replace those currently in service. These are the Chang Zheng 5, 6, 7, and 8, which have started to come online over the last few years, but for now, the legacy vehicles continue to bear the brunt of China’s busy launch schedule.

Despite the loss of its original raison d’être, the design would be revived as the Chang Zheng 4A to launch a pair of Feng Yun weather satellites into sun-synchronous orbit in 1988 and 1990. With a stretched first stage compared to the Chang Zheng 2C and a new storable-propellant upper stage, the Chang Zheng 4A could carry a much heavier payload to SSO than the 2C. 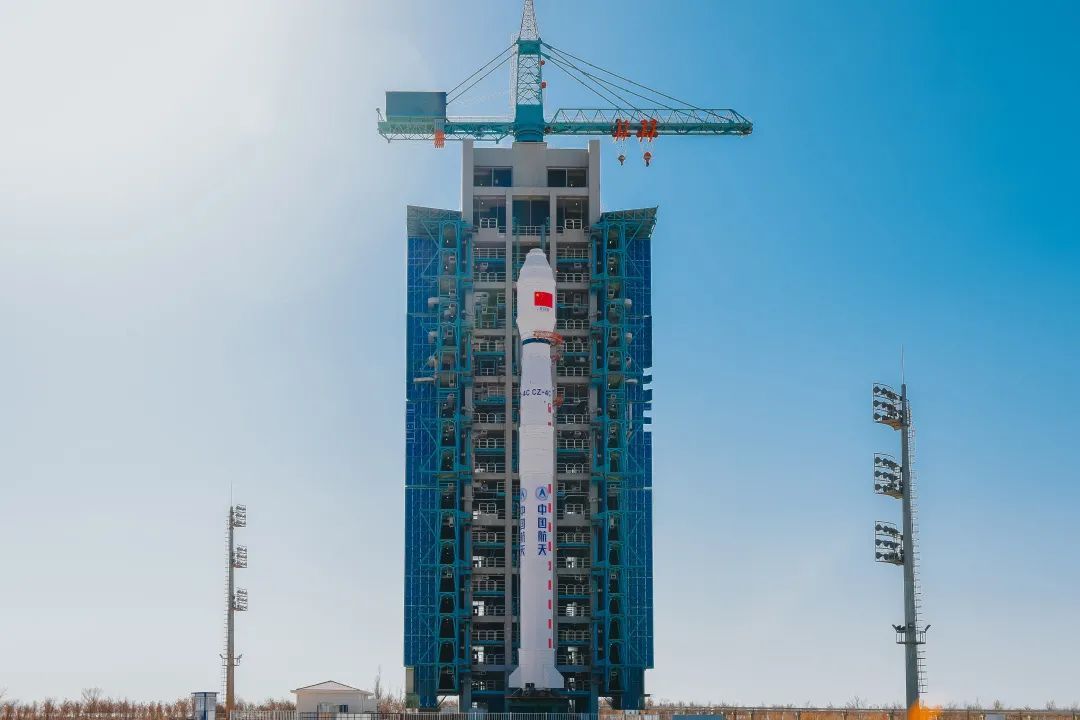 After these initial launches, the Chang Zheng 4 would not fly again for almost nine years. Then, in May 1999, an upgraded Chang Zheng 4B debuted, with improvements including a further stretch to its first stage. The Chang Zheng 4C, which first flew in April 2006, represents a further upgrade with the third stage modified to add an in-flight restart capability for multiple engine burns. Both the CZ-4B and 4C remain in service, and it was a 4C used for Saturday’s launch.

Saturday’s launch marked the fortieth flight of the Chang Zheng 4C and the 87th overall for the Chang Zheng 4 series. Of its previous 39 launches, 37 were completed successfully, and two ended in failure. The most recent failure occurred in May 2019, and the CZ-4C completed thirteen successful launches since that failure prior to Saturday’s mission. The rocket that carried out Saturday’s launch was numbered CZ-4C Y30.

Chang Zheng 4 can launch from three of China’s four main launch sites, the Jiuquan, Taiyuan and Xichang Satellite Launch Centers. About three-quarters of Chang Zheng 4 launches have been from Taiyuan, with the rest flying from Jiuquan except for a single CZ-4C launch from Xichang in 2018, which deployed the Queqiao communications relay in support of the Chang’e 4 lunar mission. Chang Zheng 4 can reach sun-synchronous orbit from either Taiyuan or Jiuquan.

Saturday’s launch marked China’s third orbital launch of 2022, coming a month after the country’s previous launch, which was the Ludi Tance-1 01A mission flown from the same pad at Jiuquan. Despite this long gap, the time until China’s next orbital launch could be just a few hours, with a Chang Zheng 8 slated to lift off from the Wenchang Satellite Launch Center early on Sunday, less than three and a quarter hours after the CZ-4C launch. 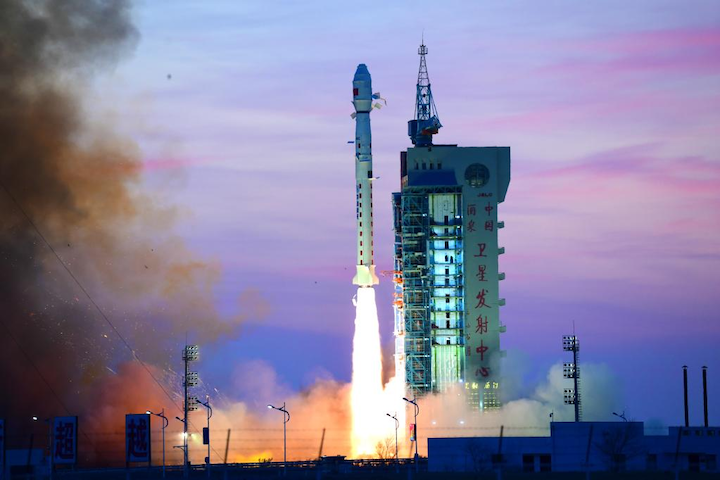 The rocket blasted off at 7:44 a.m. (Beijing Time) from the Jiuquan Satellite Launch Center in northwest China and soon sent the L-SAR 01B satellite into its preset orbit.

The satellite will be used to monitor Earth's geological environment, landslides and earthquakes.

The mission marked the 408th flight of the Long March carrier rockets, according to the launch center.

China's L-SAR 01 is a satellite group composed of two satellites equipped with L-band synthetic aperture radar (SAR), namely the L-SAR 01A and the L-SAR 01B. The former was sent into space on Jan. 26.

"SAR" refers to a microwave-imaging radar system that emits electromagnetic waves to Earth and receives echoes. It can take high-definition microwave pictures of the land surface.

The two satellites will be tasked with providing data to support land resource, mapping, forestry, and disaster prevention and relief uses. They will significantly strengthen rapid response capabilities in the event of a natural disaster, the China National Space Administration said in a statement.

Both the satellites and the rocket were built by the Shanghai Academy of Spaceflight Technology, a subsidiary of the China Aerospace Science and Technology Corporation.