The Russian military convoy stretches 40 miles long, according to Reuters. 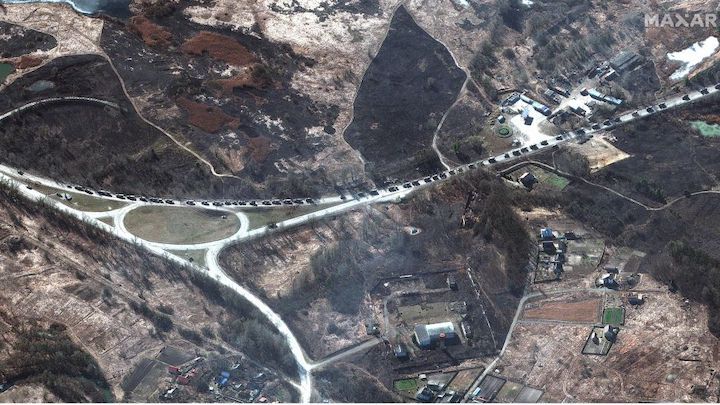 Satellites have captured images of a massive convoy of Russian military vehicles 40 miles long (65 kilometers) nearing the besieged Ukrainian capital Kyiv as the country continued its resistance against Russia on the sixth day of that country's invasion.

The images, captured Monday (Feb. 28), show the convoy stretching from the town of Prybirsk, in the north, near the border with Belarus, all the way to the Antonov International Airport in the outskirts of Kyiv. Russia invaded Ukraine on Thursday (Feb. 24) and satellites have been tracking the military conflict from space.

The U.S. Earth observation company Maxar Technologies, which acquired the images, said that while some vehicles were spaced "fairly apart," in other sections of the road they were traveling in formations of two to three vehicles abreast.

Russia has had a tough time conquering Ukraine as residents of the former Soviet republic rose to defend their freedom, with civilians (including women) joining the defense forces in droves.

The capital Kyiv has been warding off the Russian aggressors since last Thursday, but analysts worry Russia is only about to deploy its highest caliber weapons. In fact, the Russian ministry of defense urged the residents of Kyiv on Tuesday (March. 1) to flee or be prepared to die, according to Reuters.

The satellite images confirm Russia's intentions. In addition to the convoy, further troops and ground attack helicopters were spotted in southern Belarus, less than 20 miles (32 km) from the border with Ukraine. Belarus, ruled by dictator Alexander Lukashenko, is Russia's most significant ally in this war. Although Belarusian forces are not officially part of the invasion, Lukashenko has openly blamed the west for the situation, claiming economic sanctions rolled out by western countries in response to Russia's aggression are pushing the planet toward another world war.

Contrary to the official stance of Belarus, Ukrainians said that Belarusian soldiers had been seen on Ukraine's territory, according to the Independent.

Russian dictator Vladimir Putin, the mastermind behind the attempt to take over Ukraine, has made repeated insinuations he would not hesitate to use nuclear weapons to punish the west for its interventions in support of Ukraine.

Yesterday, Ukrainian news outlets claimed that the Russian invaders used a vacuum bomb in the battle in Ukraine's second biggest city Kharkiv, Politico reported. Also known as thermobaric weapons, vacuum bombs are extremely destructive. They suck in oxygen from the surroundings to generate a temporary vacuum during a high-temperature explosion that lasts significantly longer than a conventional blast. They can vaporize bodies and cause light-threatening internal injuries that might be invisible from the outside.

The war in Ukraine, the largest and most devastating military operation in Europe since the end of World War II, is sending ripples through the international space sector, where cooperation with Russia has been close and abundant for decades.

Questions remain around the future of the International Space Station, the hallmark of the post-Cold War era spirit, which currently cannot sustain operations without Russia's participation.