Speak of Isom "Ike" Rigell to anyone familiar with the Apollo space program and the words "icon" and "legend" are routinely used.

The former NASA Apollo program chief engineer and deputy launch director died on Thursday morning at the age of 99.

A life defined by passion

Rigell defined his life with three guiding passions, according to his son David Rigell, "passion for his faith, passion for his commitment to family, and passion for his service to his country. Those three things very much defined how he lived his life and how he spent his time. Those were his priorities, unquestionably."

His dedication to country began long before his forty-year career with NASA.

He enlisted in the United States Marines at age eighteen right out of high school serving five years and experiencing history as it unfolded at the Battle of Midway and in Iwo Jima during World War II.

"It wasn't just his five years in the Marine Corps. If you were to see any pictures of him up until the last week of his life, he had his World War II veteran, United States Marine Corps hat on," said his son. 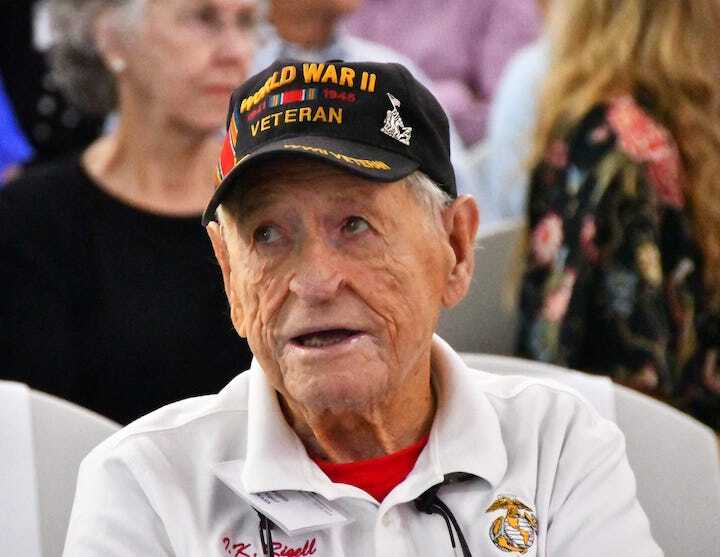 From the military to NASA

Following his military career, he attended the Georgia Institute of Technology where he earned a degree in electrical engineering.

He then briefly worked for the Tennessee Valley Authority before joining the Army Ballistic Missile Agency headed by Wernher Von Braun and moving to Cape Canaveral, Florida to ultimately work with NASA.

"He was a charter member of the original launch team that was being formed to launch the Redstone rocket which was being developed there," said his son.

In a 2019 interview with Florida Today, Rigell said, "I was out there a few minutes before we cleared the pad. I looked up seventy feet, five feet in diameter: 'This thing is too big to fly.' I couldn't visualize fifteen years later I'd be looking up at a rocket three hundred and fifty-one feet high, thirty-three feet in diameter."

Ike Rigell, right, in the Launch Control Center during the countdown for Apollo 11 in July 1969.
PROVIDED

Rigell would go on to become a prominent member of NASA's Apollo program and later the shuttle program before retiring from NASA in 1991. "He was truly one of the, and it's no overstatement or exaggeration to say that, he was one of the founding fathers of the United States space program," said his son.

After his retirement from NASA, he continued to work in the space industry serving ten years as vice president of Florida Operations for United Space Boosters, which assembled, tested, and refurbished the space shuttles solid rocket boosters.

Beyond his duty to his country, according to his son, he was a religious man deeply devoted to his family, "his belief in God was the foundation of everything that he did. The way he treated other people."

He explained that everyone who left his father's presence would "get an outstretched arm and you're going to get a bless you, or may the Lord bless you. Everybody, everybody, got a blessing from Ike."

Just a day before his passing, his final message scrawled out on a whiteboard with assistance from his daughter simply read, "God bless you."

Rigell spent 67 years married to his wife, Kathryn, who survives him. The two traveled the world together.

According to their son, "Some of their travel to Europe, Israel, North Africa, South America, Russia, Turkey, and China was related to his work because of the International Space Station. He would travel on business. He would take my mother often with him. So they traveled the world both on business and personally and they loved it."

No matter where they were, their faith was with them explained their son, "They went to China and saw the Great Wall, but they also took Bibles with them."

Just a few weeks before his passing his family gathered at his home in Titusville and Rigell asked everyone to join him so he could pray with them.

His son recalled that "We figured, okay, this is big. This is one of his last declarations to a large chunk of the family. You know, is it going to be about him because you know, he's in pain and having difficulty reading and stuff. Oh, no, no, not about him."

He went on to explain that his father's final request was that, "he wanted the strength to be able to to deliver the remarks in honor of his late friend Rocco Petrone" at the recent renaming ceremony of the Launch Control Center at Kennedy Space Center.

Petrone was the director of launch operations during the Apollo era. According to Rigell's son, it was his father's initial idea years ago "to name the Launch Control Center after his dear friend."

Although his health deteriorated quickly and he wasn't able to attend the ceremony in person at Kennedy Space Center, Rigell was able to record his remarks for the ceremony which were presented on his behalf by his son, former U.S. Rep. Scott Rigell.

Rigell died just two days following the ceremony. "He wanted to honor the memory of his dear friend that he spoke so highly of. And that is one of the few prayer requests of my father which he was not able to personally fulfill," explained David Rigell.

Rigell's photo is now displayed in his honor inside the Rocco A. Petrone Launch Control Center.

"So our new motto, actually, it's not so new because we've said this for years, but our motto is to 'Live like Ike,'" he explained.

A reception with the family will take place in the sanctuary of Park Avenue Baptist Church in Titusville, on Saturday, April 2, 2022, at 9:00 a.m., to be followed by a memorial service at the church at 10:00.  Light refreshments will be served in the fellowship hall of the church immediately following the service.”