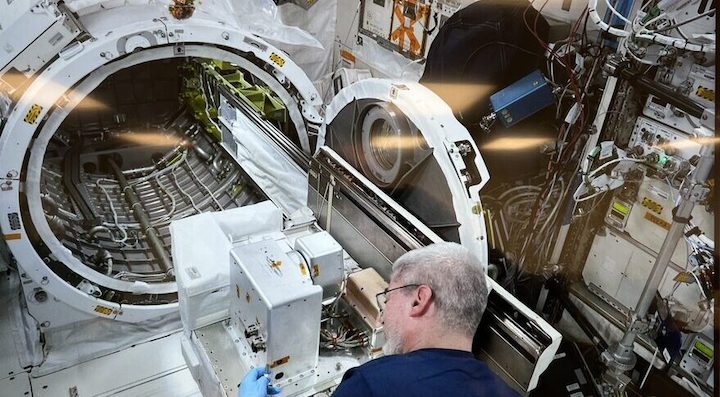 Within days testing will begin of the robotic connector developed by Germany’s iBoss GmbH to transmit power and data like a computer’s USB cable, alongside a Skycorp computer and a radiation sensor built by Space Environmental Technologies and jointly funded by the Defense Department and NASA Science Mission Directorate.

The technology demonstration payload, called Intelligent Space Systems Interface Flight Qualification Experiment (iSSIFQE), traveled to ISS in February on a Northrop Grumman Cygnus cargo spacecraft. This week, astronauts assembled iSSIFQE in the Japanese Kibo module. Tomorrow, the payload is scheduled to be mounted on a platform outside the space station’s Japanese Experimental Module. The demonstration is scheduled to last more than six months.

Funding and support for the project was provided by the Pentagon’s Defense Innovation Unit, the ISS National Laboratory, Japanese startup Space BD and NASA.

In addition to testing the robotic connector, the iSSIFQE experiment is expected to shed light on the ISS orbital debris environment. Launchspace Technologies, a Florida company focused on orbital debris detection, tracking and removal, plans to measure the impact of orbital debris on a multilayer insulation blanket that will cover iSSIFQE to provide passive thermal protection.

After the iSSIFQE experiment concludes, the blanket will be returned to Earth in a SpaceX Dragon cargo capsule. Once on the ground, Launchspace will examine it in an effort to characterize the ISS orbital debris environment prior to deploying its own ISS experiment in 2023.

Data on the orbital debris environment around ISS is increasingly important in light of the recent Russian antisatellite test, Bauman said.

“We are extremely interested in the impact that orbital debris has on human and robotic spaceflight,” Wingo said in a statement. “We are happy to facilitate the work of Launchspace in this very important area that we believe is far worse than most people realize.”