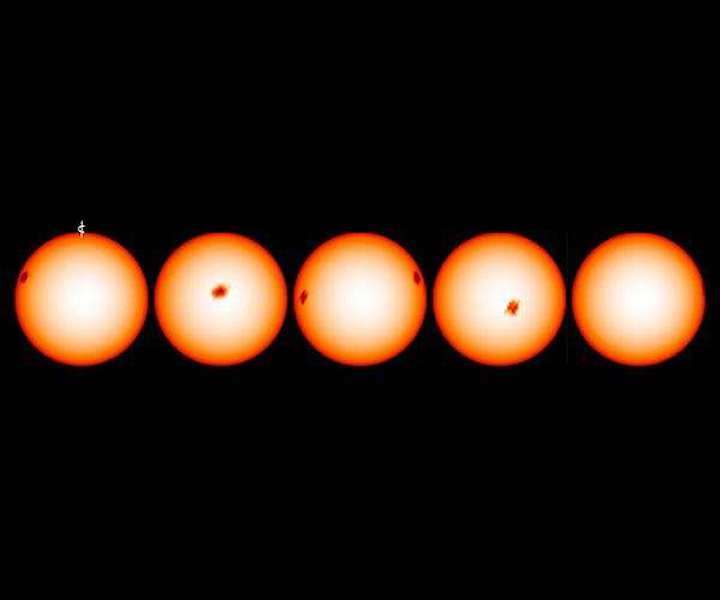 Reconstructed surface of the spotted star Epsilon Eridani with each panel showing the star advanced one-fifth of its rotation. (Visualization by Sam Cabot)

Astronomers searching for Earth-like planets in other solar systems have made a breakthrough by taking a closer look at the surface of stars.

A new technique developed by an international team of researchers - led by Yale astronomers Rachael Roettenbacher, Sam Cabot, and Debra Fischer - uses a combination of data from ground-based and orbiting telescopes to distinguish between light signals coming from stars and signals coming from planets orbiting those stars.

A study detailing the discovery has been accepted by The Astronomical Journal.

"Our techniques pull together three different types of contemporaneous observations to focus on understanding the star and what its surface looks like," said Roettenbacher, a 51 Pegasi b postdoctoral fellow at Yale and lead author of the paper. "From one of the data sets, we create a map of the surface that allows us to reveal more detail in the radial velocity data as we search for signals from small planets.

"This procedure shows the value of obtaining multiple types of observation at once."

For decades, astronomers have used a method called radial velocity as one way to look for exoplanets in other solar systems. Radial velocity refers to the motion of a star along an observer's sightline.

Astronomers look for variations in a star's velocity that might be caused by the gravitational pull of an orbiting planet. This data comes via spectrometers - instruments that look at light being emitted by a star and stretch the light into a spectrum of frequencies that can be analyzed.

As astronomers have rushed to develop methods for detecting Earth-like planets, however, they have run into a barrier that has stopped progress for years. The energy emitted by stars creates a boiling cauldron of convecting plasma that distorts measurements of radial velocity, obscuring signals from small, rocky planets.

But a new generation of advanced instruments is attacking this problem. These instruments include the EXtreme PREcision Spectrograph (EXPRES), which was designed and built by Fischer's team at Yale, the Transiting Exoplanet Survey Satellite (TESS), and the Center for High Angular Resolution Astronomy (CHARA) interferometric telescope array.

For the new study, the researchers used TESS data to reconstruct the surface of Epsilon Eridani, a star in the southern constellation of Eridanus that is visible from most of Earth's surface. They then looked for starspots - cooler regions on the surface of a star caused by strong magnetic fields.

"With the reconstructions, you know the locations and sizes of spots on the star, and you also know how quickly the star rotates," said Cabot. "We developed a method that then tells you what kind of signal you would see with a spectrometer."

The researchers then compared their TESS reconstructions with EXPRES spectrometer data collected simultaneously from Epsilon Eridani.

"This allowed us to directly tie contributions of the radial velocity signature to specific features on the surface," Fischer said. "The radial velocities from the starspots match up beautifully with the data from EXPRES."

Interferometry combines separated telescopes to create a much larger telescope. For this, the researchers used the CHARA Array, the world's largest optical interferometer, located in California.

Roettenbacher said she and her colleagues will apply their new technique to sets of interferometric observations in order to directly image the entire surface of a star and determine its radial velocity contribution.

"Interferometric imaging is not something that is done for a lot of stars because the star needs to be nearby and bright. There are a handful of other stars on which we can also apply our pioneering approach," Roettenbacher said.

Former Yale researchers Lily Zhao, who is now at the Flatiron Institute, and John Brewer, who is now at San Francisco State University, are among the study's co-authors.

The research was supported by the Heising-Simons Foundation, an anonymous Yale alumnus, the National Science Foundation, and NASA.