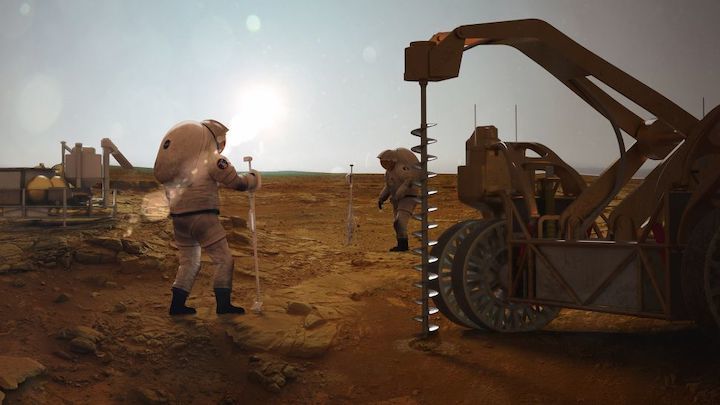 Future Mars astronauts could make rocket fuel on the Red Planet using air, water and sunlight, a new study finds. The technology could fuel the astronauts' flights back to Earth.

Making rocket fuel on Mars instead of shipping it from Earth could not only save billions of dollars, but it could also generate tons of oxygen to help people exploring Mars breathe, scientists added.

NASA's current plans for departures from Mars involve rocket engines fueled by methane and liquid oxygen. However, neither of these fuels exists on the Red Planet, which means they would need to be transported from Earth to propel a spacecraft to Martian orbit. Ferrying the 30 or so tons of methane and liquid oxygen that NASA estimated was needed to help a human crew launch off Mars would cost about $8 billion.

One method NASA proposed to reduce this cost used chemical reactions to produce liquid oxygen from carbon dioxide in the Martian atmosphere. However, this still requires transporting methane from Earth to Mars.

Now researchers suggest a biologically inspired alternative that can produce both methane and liquid oxygen from Martian resources. Not only that, it could generate excess oxygen to help support human life.

"A biotechnology-enabled in situ utilization strategy for rocket propellant production on Mars is not too far fetched," study senior author Pamela Peralta-Yahya, a synthetic biologist at the Georgia Institute of Technology, told Space.com.

The new technique would involve shipping two microbes to Mars. The first would be cyanobacteria, which would use sunlight to create sugars via photosynthesis after given carbon dioxide from the Martian atmosphere and water taken from Martian ice. The second would be genetically modified E. coli bacteria that would ferment those sugars into a rocket propellant called 2,3-butanediol, which is currently used on Earth to help make rubber.

Although 2,3-butanediol is a weaker rocket fuel than methane, the gravity on Mars is only one-third of what is felt on Earth. "You need a lot less energy for lift-off on Mars, which gave us the flexibility to consider different chemicals that aren't designed for rocket launch on Earth," Peralta-Yahya said in a statement. "We started to consider ways to take advantage of the planet's lower gravity and lack of oxygen to create solutions that aren't relevant for Earth launches."

This strategy also needs enzymes shipped to Mars to digest the cyanobacteria and free up their sugars. Industrial separation techniques are also required to extract the 2,3-butanediol from the E. coli fermentation broth.

The researchers envision a rocket fuel plant the size of four football fields. They estimated their method would use 32% less power than the strategy that involved shipping methane from Earth and also generate 44 tons of excess oxygen to support human crews. However, it would weigh three times more.

Still, the scientists noted they could further optimize their method, such as by increasing microbial productivity, so that it would use 59% less power than the strategy that involved shipping methane from Earth and weigh 13% less, while still generating 20 tons of excess oxygen.

"Given the distinct advantages that the biological process provides, such as excess oxygen generation for colony formation, we should start thinking about how to engineer microbes for their safe use on Mars," Peralta-Yahya said.

The scientists detailed their findings online Oct. 25 in the journal Nature Communications.

Correction: A previous version of this story initially stated that 2,3-butanediol is a weaker rocket fuel than methane and liquid oxygen. It is actually only weaker than methane and has been corrected above.