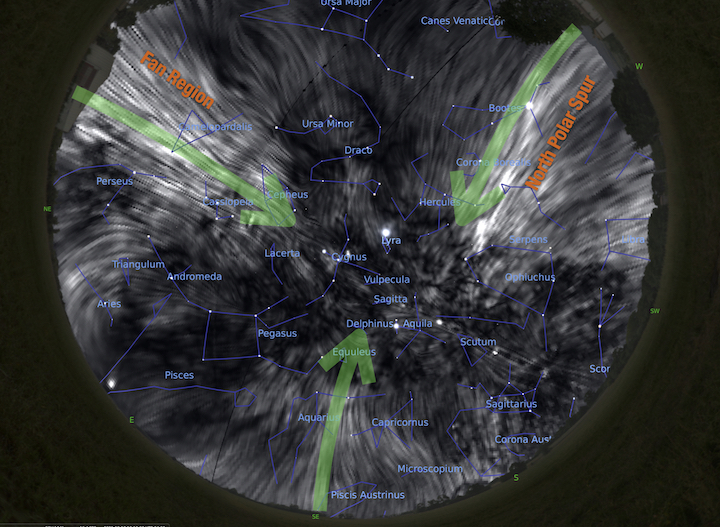 The sky as it would appear in radio polarized waves. The Van-Gogh-like lines show magnetic field orientation (Credit below).

A Dunlap Institute astronomer has discovered that our solar system may be surrounded by what she describes as a magnetic tunnel that can be seen in radio waves.

Dr. Jennifer West, Research Associate at the Dunlap Institute for Astronomy and Astrophysics, is making a scientific case that two bright structures that are seen on opposite sides of the sky - previously considered to be separate - are actually connected and are made of rope-like filaments. This connection forms what looks like a tunnel around our solar system.

"If we were to look up in the sky," explains West, "we would see this tunnel-like structure in just about every direction we looked - that is, if we had eyes that could see radio light."

Called "the North Polar Spur" and "the Fan Region," we've known about these two structures for a long time. "Since the 60s," West says. But most scientific explanations have focused on them individually. West and her colleagues believe they are the first astronomers to connect them as a unit.

Made up of charged particles and a magnetic field, the structures are shaped like long ropes, and are located about 350 light years away from us. They are about 1000 light years long. "That's the equivalent distance of travelling between Toronto and Vancouver two trillion times," West explains.

West has been thinking about these features on and off for 15 years - ever since she first saw a map of the radio sky. More recently, she built a computer model that calculated what the radio sky would look like from Earth, as she varied the shape and location of the long ropes. This model allowed West to "build" the structure around us, and showed her what the sky would look like through our telescopes. It was this new perspective that helped her to match the model to the data.

"A few years ago, one of our co-authors, Tom Landecker, told me about a paper from 1965, from the early days of radio astronomy," West says. "Based on the crude data available at this time, the authors (Mathewson and Milne), speculated that these polarized radio signals could arise from our view of the Local Arm of the Galaxy, from inside it."

"That paper inspired me to develop this idea and tie my model to the vastly better data that our telescopes give us today."

To further explain this, West uses the Earth's map as an example. The North pole is on the top and the Equator is through the middle - but of course, we can always re-draw that map with a different perspective. The same is true for the map of our Galaxy. "Most astronomers look at a map with the North pole of the Galaxy up and the Galactic centre in the middle," she explains. "An important part that inspired this idea was to remake that map with a different point in the middle."

The data results of West's research have been published in the Astrophysical Journal (here).

"This is extremely clever work," says Dr. Bryan Gaensler, a professor at the Dunlap Institute and an author on the publication. "When Jennifer first pitched this to me, I thought it was too 'out-there' to be a possible explanation. But she was ultimately able to convince me! Now I'm excited to see how the rest of the astronomy community reacts."

An expert in magnetism in galaxies and the interstellar medium, West looks forward to the next possible discoveries within this research.

"Magnetic fields don't exist in isolation," she explains. "They all must to connect to each other. So a next step is to better understand how this local magnetic field connects both to the larger-scale Galactic magnetic field, and also to the smaller scale magnetic fields of our Sun and Earth."

In the meantime, West agrees that the new "tunnel" model not only brings new insight to the science community, but also a ground-breaking concept for the rest of us, on the ground.

"I think it's just awesome to imagine that these structures are everywhere, whenever we look up into the night sky."