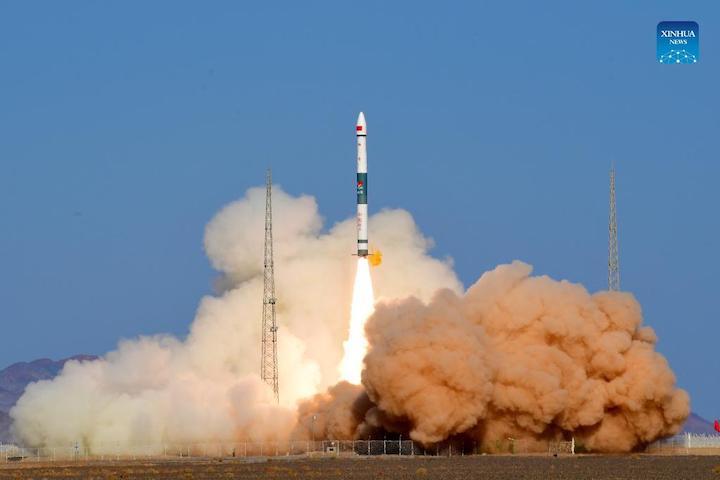 The successful deployment of a small remote sensing satellite Wednesday set a new record for Chinese orbital launch attempts in a single year at 40 missions, surpassing a mark set in 2018 and 2020.

A solid-fueled Kuaizhou 1A rocket vaulted off a launch pad Wednesday at the Jiuquan space base in the Gobi Desert of northwestern China. The smallsat launcher headed south from Jiuquan to place its payload into a polar orbit.

Liftoff occurred at 2:19 a.m. EDT (0619 GMT; 2:19 p.m. Beijing time) Wednesday, according to China’s state-run Xinhua news agency. The mission was delayed from last week, reportedly because of coronavirus concerns at the launch site.

The satellite on-board the rocket was Jilin 1 Gaofen 02F, a new member of a commercially-focused fleet of remote sensing satellites owned by Chang Guang Satellite Technology Co. Ltd. With Wednesday’s launch, 31 Jilin 1-series spacecraft have successfully flown into orbit since 2015.

Chang Guang plans to launch a fleet of more than 100 small Earth-imaging satellites. The company is a joint venture between the Changchun Institute of Optics, Fine Mechanics and Physics of the Chinese Academy of Sciences, the government of Jilin province, and three private companies.

The Jilin 1 Gaofen 02F satellite is believed to be capable of collecting imagery with a resolution of better than 2.5 feet (76 centimeters), supporting applications in natural resource and environmental monitoring.

The Kuaizhou 1A rocket is capable of injecting 660 pounds (300 kilograms) of payload to low Earth orbit, according to Expace. Kuaizhou means “speedy vessel” in Chinese, a name indicative of its purpose as a satellite launcher that can be readied for liftoff in a short time period.

CASIC confirmed the launch Wednesday was successful in a statement posted on the Chinese Weibo social media network. It was the 12th flight of a Kuaizhou 1A rocket since 2017.

U.S. military tracking data indicated the rocket’s upper stage deployed the Jilin 1 Gaofen 02F satellite into an orbit at an altitude of around 335 miles (540 kilometers), with an inclination of 97.5 degrees to the equator.

The official number of 40 orbital launch attempts from China this year does not include the test of a hypersonic vehicle reported by the Financial Times.

China’s Long March rocket family, developed by the government-owned China Aerospace Science and Technology Corp., or CASC, has launched on 36 missions this year, all successfully. There have been two successful flights of Kuaizhou 1A rockets, and two failed launch attempts of the commercial Hyperbola 1 rocket from the commercial company iSpace.

At the beginning of the year, CASC said it planned more than 40 Long March rocket flights in 2021.