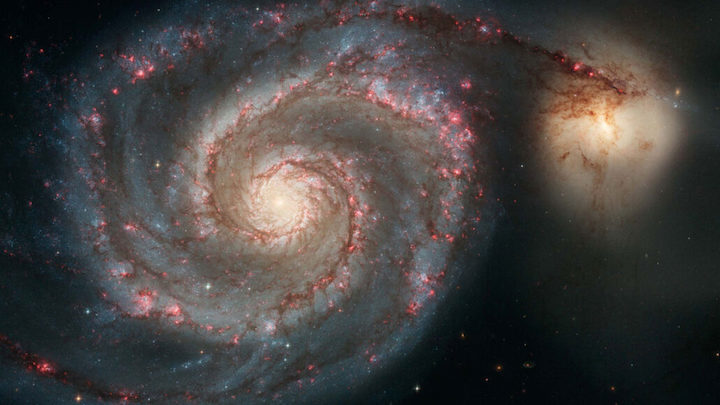 The spiral-shaped Whirlpool galaxy may be the host of the first planet spotted outside of the Milky Way.

Astronomers may have spotted the first known planet in another galaxy.

The potential world, called M51-ULS-1b, orbits both a massive star and a dead star in the Whirlpool galaxy, about 28 million light-years from Earth. The object’s existence, if confirmed, suggests that there could be many other extragalactic exoplanets waiting to be discovered, astronomers report in a study to appear in Nature Astronomy.

“We probably always assumed there would be planets” in other galaxies, says astrophysicist Rosanne Di Stefano of the Harvard-Smithsonian Center for Astrophysics in Cambridge, Mass. “But to actually find something, it’s a beautiful thing. It’s a humbling experience.”

More than 4,800 planets have been discovered orbiting stars other than the sun, all of them inside the Milky Way. There’s no reason to think that other galaxies don’t also host planets. But the most popular exoplanet hunting techniques are difficult to do with such faraway stars, which blend together too much to observe them one by one.

X-ray binaries usually consist of a massive star and the remains of a second massive star, which has collapsed into a neutron star or a black hole. The dead star steals material from the living star and heats it to such hot temperatures that it emits bright X-rays that stand out from the crowd of other stars.

That X-ray region can be smaller than a giant planet, meaning if a planet crosses, or transits, in front of such a system from astronomers’ perspective on Earth, it could temporarily block all the X-rays, revealing the planet’s presence.

Only one turned up a clear planetlike signal. On September 20, 2012, an object had blocked all of the X-rays from the X-ray binary M51-ULS-1 for about three hours.

After ruling out gas clouds passing in front of the binary, fluctuations in the X-ray source itself or other explanations for the dip, Di Stefano and colleagues conclude that the object was most likely a Saturn-sized planet orbiting the X-ray binary hundreds of times the distance between Earth and the sun.

This isn’t a comfortable environment for the planet. “You don’t want to be there,” Di Stefano notes. Despite its distance from the X-ray binary, the planet receives as much energy in X-rays and ultraviolet radiation as a hot Jupiter exoplanet, which orbits its star in just a few days, receives from an ordinary star (SN: 6/5/17).

“The possibility that the team discovered the transit of an extragalactic planet is quite intriguing and would be a great discovery,” says astrophysicist Ignazio Pillitteri of the Italian National Institute for Astrophysics in Palermo. He would like to see the transit happen again to confirm it.

Not everyone finds the result convincing. “I find the paper very speculative,” says astrophysicist Matthew Bailes of the Swinburne University of Technology in Melbourne, Australia. If the planet is real, finding it relied on a lot of coincidences: Its orbit needed to be perfectly aligned with the point of view from Earth, and it needed to just happen to be passing in front of the X-ray binary while Chandra was looking.

Di Stefano counters that the fact that her team saw a signal within such a small number of observations suggests there are lots of extragalactic planets out there. “Maybe we were lucky,” she acknowledges. “But I think it’s very likely that we were not special. We looked and we found something because there was something to find.”

Di Stefano doesn’t expect to see this particular planet again in her lifetime. It could take decades for it to pass in front of its host stars again. “The real test,” she says, “is finding more planets.”

Could this be a planet in another galaxy?

Using ESA’s XMM-Newton and NASA’s Chandra X-ray space telescopes, astronomers have made an important step in the quest to find a planet outside of the Milky Way.

Spotting a planet in another galaxy is hard, and even though astronomers know that they should exist, no planetary systems outside of the Milky Way have been confirmed so far. Because the light from another galaxy is packed into a tiny area on the sky, it is very difficult for telescopes to distinguish one star from another, let alone a planet orbiting around them. And the usual techniques to find exoplanets in our galaxy don’t work as well for planets outside of it.

This is different when studying X-rays, instead of visible light, in a galaxy. Because there are less objects that shine bright in X-ray light, an X-ray telescope like ESA’s XMM can more easily distinguish between objects when observing a galaxy. Those objects are therefore easier to identify and study, and it might be possible to find a planet around them.

Some of the brightest objects that can be studied in external galaxies are the so-called X-ray binaries. They consist of a very compact object – a neutron star or black hole – that is eating material from a companion, or ‘donor’, star orbiting around it. The infalling material is accelerated by the intense gravitational field of the neutron star or black hole and heated to millions of degrees, producing a lot of bright X-rays. Astronomers expect that theoretically, planets passing in front of (transiting) such a source would block these X-rays, causing a dip in the observed X-ray light curve.

“X-ray binaries may be ideal places to search for planets, because, although they are a million times brighter than our Sun, the X-rays come from a very small region. In fact, the source that we studied is smaller than Jupiter, so a transiting planet could completely block the light from the X-ray binary,” explains Rosanne Di Stefano from the Center for Astrophysics, Harvard & Smithsonian in the United States, and first author of a new study published in Nature Astronomy today.

Rosanne and colleagues searched in Chandra and XMM-Newton data of three galaxies for such X-ray transits, dips in the light that could be explained by planets. And they found a very special signal in the Whirlpool Galaxy (M51) that they decided to study in more detail. The dip occurred in X-ray binary M51-ULS-1 and completely blocked the signal for a few hours, before it came back again.

Now the game of carefully crossing off possible explanations began, before the researchers could even consider the option of an extragalactic planet. “We first had to make sure that the signal was not caused by anything else,” says Rosanne, whose team argues against a number of possibilities in their new publication. “We did this by an in-depth analysis of the X-ray dip in the Chandra data, analysing other dips and signals in the XMM data, and also modelling dips caused by other possible events, including a planet.”

Could the X-ray dip be caused by small stars like a brown or red dwarf? No, they argue, the system is too young for that, and the transiting object too large.

Could it be a cloud of gas and dust? Not likely, the team says, because the dip indicates a transiting object with a well-defined surface, which would not be the same for a passing cloud. Even if the planet had an atmosphere, it would still have a more well-defined surface than a cloud.

Could the dip be explained by variations in brightness of the source itself? The paper authors are confident that this is not the case, because although the light from the source completely disappeared for a few hours before it came back, the temperature and light colours stayed the same.

Lastly, the team also compared the dip to another blockage of the light caused by the ‘donor’ star passing in front of the compact star. This was partly observed by XMM-Newton and caused a much longer black-out, which was different from the dip caused by a possible planet. X-ray binary transit by a possible planet
Access the video

“We did computer simulations to see whether the dip has the characteristics of a planet transiting, and we find that it fits perfectly. We are pretty confident that this is not anything else and that we have found our first planet candidate outside of the Milky Way,” adds Rosanne.

The team also speculates about the characteristics of the planet based on their observations: it would be the size of Saturn, orbiting the binary star system from tens of times the Earth-Sun distance. It would make one full orbit roughly every 70 years, and be bombarded with extreme amounts of radiation, making it uninhabitable by life as we know it on Earth.

This long orbit of the planet candidate is also a limitation for the study, because the event can’t be repeated any time soon. That’s why the team remains careful to say that they found a possible planet candidate, for which the broader community might find other explanations, although they have not been found after careful research by the team. “We can only say with confidence that it doesn’t fit any of our other explanations,” Rosanne clarifies.

Still, this is an exciting step forward in the quest to find a planet outside of the Milky Way. This is the first planet candidate that would orbit a known host system, as compared to candidates found with gravitational lenses. This would also be the first time that a planet is found orbiting an X-ray binary. The existence of those planets is consistent with the fact that planets are found around pulsars (rapidly rotating neutron stars), and some of these pulsars have been part of an X-ray binary in the past.

“The first confirmed planet outside of our Solar System was found around a pulsar, an object typically observed in X-rays. I am excited that X-rays now also play important step in the search for planets beyond the border of our galaxy,” says Norbert Schartel, XMM-Newton Project Scientist for ESA.

“Now that we have this new method for finding possible planet candidates in other galaxies, our hope is that by looking at all the available X-ray data in the archives, we find many more of those. In the future we might even be able to confirm their existence,” says Rosanne.