Earth has not always been upright. Turns out, the planet's crust tipped on its side and back again around 84 million years ago, in a phenomenon that researchers have dubbed a "cosmic yo-yo."

The actual name for the tipping is true polar wander (TPW), which occurs when the outer layers of a planet or moon move around its core, tilting the crust relative to the object's axis. Some researchers had previously predicted that TPW occurred on Earth late in the Cretaceous period, between 145 million and 66 million years ago, but that was hotly debated, according to a statement by the researchers.

However, the new study strongly suggests TPW did occur on Earth. Researchers mapped the ancient movement of Earth's crust by looking at magnetic-field data trapped inside ancient fossilized bacteria. They found that the planet tilted 12 degrees relative to its axis around 84 million years ago, before fully returning to its original position over the next 5 million years.

"This observation represents the most recent large-scale TPW documented and challenges the notion that the [Earth's] spin axis has been largely stable over the past 100 million years," the researchers wrote in their paper, published online June 15 in the journal Nature Communications.

Earth is made out of four main layers: the solid inner core, the liquid outer core, the mantle and the crust. During TPW, the entire planet would appear turned over on its side, but in reality only the outermost layers have moved.

"Imagine looking at Earth from space, TPW would look like the Earth tipping on its side," co-author Joe Kirschvink, a geobiologist at the Tokyo Institute of Technology in Japan and a professor at the California Institute of Technology, said in the statement. "What's actually happening is that the whole rocky shell of the planet [the mantle and crust] is rotating around the liquid outer core."

Individual pieces of Earth's outermost layers are constantly moving and changing as tectonic plates collide together and subduct underneath one another; but during TPW, the outer layers move together as a single unit.

As a result, the tilt in Earth's crust would not have resulted in any major tectonic activity or drastic changes to major ecosystems. Instead, it would have been a gradual process that would not have impacted the dinosaurs and other living things walking around on the surface.

Earth's electromagnetic field would have been static during the TPW because it is created by the liquid inner core, which would have stayed in place. So rather than the magnetic poles moving, it is the geographic poles that start to wander.

To test if Earth did undergo TPW during the Cretaceous, the researchers turned to magnetic minerals within limestone deposits in Italy.

"These Italian sedimentary rocks turn out to be special and very reliable because the magnetic minerals are actually fossils of bacteria that formed chains of the mineral magnetite," co-author Sarah Slotznick, a geobiologist at Dartmouth College in New Hampshire, said in the statement. 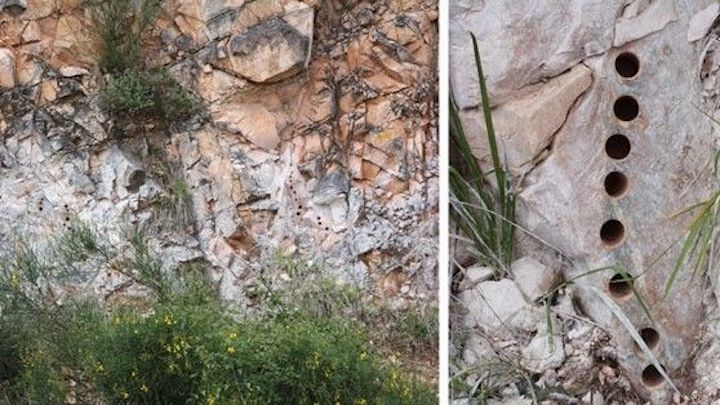 The limestone deposits in Italy which contain the fossilized magnetite (left) and the drill holes leftover from where researchers extracted some of their samples (right). (Image credit: Ross Mitchell/Tokyo Institute of Technology

Magnetite is a highly magnetic form of iron-oxide. Some types of bacteria can create chains of tiny magnetite crystals, which naturally orient with Earth's magnetic field at the time of their creation. When these particular bacteria died and were fossilized during the period of TPW, these magnetite chains got locked in place.

The researchers believe that their findings now settle the question of whether Earth had a TPW during the Cretaceous.

"It is so refreshing to see this study with its abundant and beautiful paleomagnetic data," Richard Gordon, a geophysicist at Rice University in Houston who was not involved in the study, said in the statement.