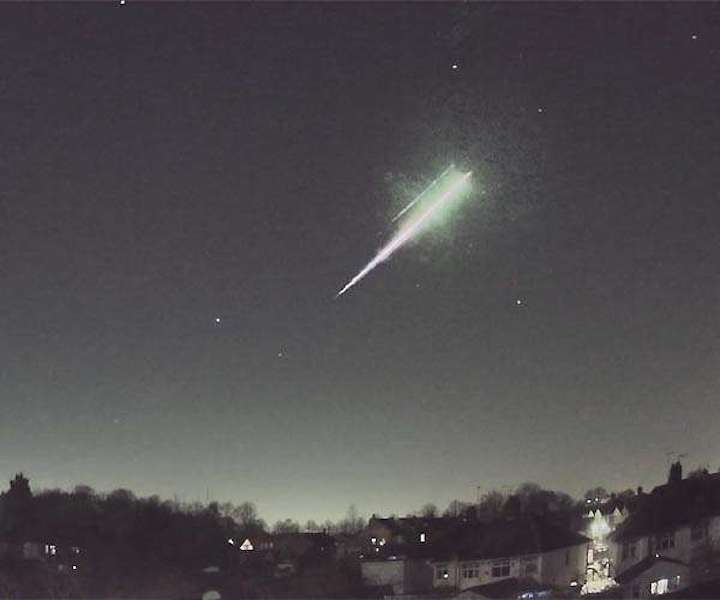 In the heavens above, it's raining dirt. Every second, millions of pieces of dirt that are smaller than a grain of sand strike Earth's upper atmosphere. At about 100 kilometers altitude, bits of dust, mainly debris from asteroid collisions, zing through the sky vaporizing as they go 10 to 100 times the speed of a bullet. The bigger ones can make streaks in the sky, meteors that take our breath away.

Scientists are using supercomputers to help understand how tiny meteors, invisible to the naked eye, liberate electrons that can be detected by radar and can characterize the speed, direction and rate of meteor deceleration with high precision, allowing its origin to be determined. Because this falling space dust helps seed rain-making clouds, this basic research on meteors will help scientists more fully understand the chemistry of Earth's atmosphere. What's more, meteor composition helps astronomers characterize the space environment of our solar system.

Meteors play an important role in upper atmospheric science, not just for the Earth but for other planets as well. They allow scientists to be able to diagnose what's in the air using pulsed laser remote sensing lidar, which bounces off meteor dust to reveal the temperature, density, and the winds of the upper atmosphere.

Scientists also track with radar the plasma generated by meteors, determining how fast winds are moving in the upper atmosphere by how fast the plasma is pushed around. It's a region that's impossible to study with satellites, as the atmospheric drag at these altitudes will cause the spacecraft to re-enter the atmosphere.

The meteor research was published in June 2021 in the Journal of Geophysical Research: Space Physics of the American Geophysical Society.

In it, lead author Glenn Sugar of Johns Hopkins University developed computer simulations to model the physics of what happens when a meteor hits the atmosphere. The meteor heats up and sheds material at hypersonic speeds in a process called ablation. The shed material slams into atmospheric molecules and turns into glowing plasma.

"What we're trying to do with the simulations of the meteors is mimic that very complex process of ablation, to see if we understand the physics going on; and to also develop the ability to interpret high-resolution observations of meteors, primarily radar observations of meteors," said study co-author Meers Oppenheim, professor of Astronomy at Boston University.

Large radar dishes, such as the iconic but now defunct Arecibo radar telescope, have recorded multiple meteors per second in a little tiny patch of sky. According to Oppenheim, this means the Earth is getting hit by millions and millions of meteors every second.

"Interpreting those measurements has been tricky," he said. "Knowing what we're looking at when we see these measurements is not so easy to understand."

The simulations in the paper basically set up a box that represents a chunk of atmosphere. In the middle of the box, a tiny meteor is placed, spewing out atoms. The particle-in-cell, finite-difference time-domain simulations were used to generate density distributions of the plasma generated by meteor atoms as their electrons are stripped off in collisions with air molecules.

"Radars are really sensitive to free electrons," Oppenheim explained. "You make a big, conical plasma that develops immediately in front of the meteoroid and then gets swept out behind the meteoroid. That then is what the radar observes. We want to be able to go from what the radar has observed back to how big that meteoroid is. The simulations allow us to reverse engineer that."

The goal is to be able to look at the signal strength of radar observations and be able to get physical characteristics on the meteor, such as size and composition.

"Analytical theory works really well when you can say, 'Okay, this single phenomenon is happening, independently of these other phenomena.' But when it's all happening at once, it becomes so messy. Simulations become the best tool," Oppenheim said.

Oppenheim was awarded supercomputer time by the Extreme Science and Engineering Discovery Environment (XSEDE) on TACC's Stampede2 supercomputer for the meteor simulations.

"Now we're really able to use the power of Stampede2 - these giant supercomputers - to evaluate meteor ablation in incredible detail," said Oppenheim. "XSEDE made this research possible by making it easy for me, the students, and research associates to take advantage of the supercomputers."

"The systems are well run," he added. "We use many mathematical packages and data storage packages. They're all pre-compiled and ready for us to use on XSEDE. They also have good documentation. And the XSEDE staff has been very good. When we run into a bottleneck or hurdle, they're very helpful. It's been a terrific asset to have."

Astronomers are leaps and bounds ahead of where they were 20 years ago in terms being able to model meteor ablation. Oppenheim referred to a 2020 study led by Boston University undergraduate Gabrielle Guttormsen that simulates tiny meteor ablation to see how fast it heats up and how much material bubbles away.

Meteor ablation physics is very hard to do with pen and paper calculations, because meteors are incredibly inhomogeneous, said Oppenheim. "You're essentially modeling explosions. All this physics is happening in milliseconds, hundreds of milliseconds for the bigger ones, and for the bolides, the giant fireballs that can last a few seconds, we're talking seconds. They're explosive events."

Oppenheim's team models ablation all the way from picoseconds, which is the time scale of the meteor disintegrating and the atoms interacting when the air molecules slam into them. The meteors are often traveling at ferocious speeds of 50 kilometers a second or even up to 70 kilometers a second.

Next, he uses a different simulator to watch what happens as those molecules then fly away, and then the independent molecules slam into the air molecules and become a plasma with electromagnetic radiation. Finally, he takes that plasma and launches a virtual radar at it, listening for the echoes there.

So far, he hasn't been able to combine these three simulations into one. It's what he describes as a 'stiff problem,' with too many timescales for today's technology to handle one self-consistent simulation.

Oppenheim said he plans to apply for supercomputer time on TACC's NSF-funded Frontera supercomputer, the fastest academic supercomputer on the planet. "Stampede2 is good for lots of smaller test runs, but if you have something really massive, Frontera is meant for that," he said.

Said Oppenheim: "Supercomputers give scientists the power to investigate in detail the real physical processes, not simplified toy models. They're ultimately a tool for numerically testing ideas and coming to a better understanding of the nature of meteor physics and everything in the universe."