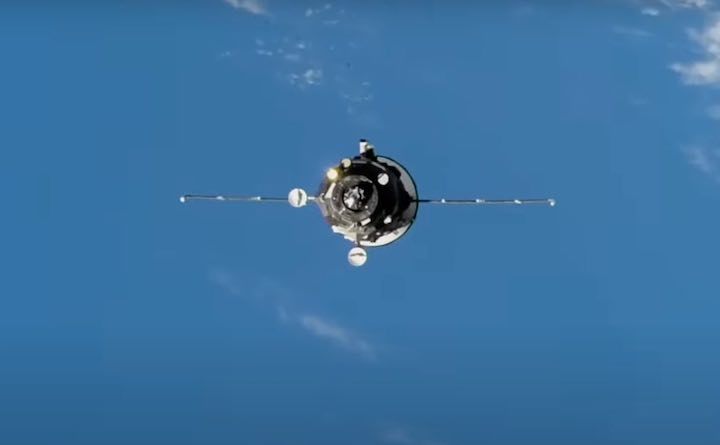 Two days after launching from the Baikonur Cosmodrome in Kazakhstan, a Russian Progress cargo freighter autonomously docked with the International Space Station Friday to deliver nearly three tons of fuel, food, and other supplies for the lab’s seven-person crew.

The Progress MS-18 cargo ship linked up with the aft port of the space station’s Zvezda service module at 9:31 p.m. EDT Friday (0131 GMT Saturday), wrapping up a picture-perfect radar-guided rendezvous more than 250 miles (400 kilometers) above Earth.

The docking occurred as the space station orbited over Argentina. Cosmonauts Anton Shkaplerov and Pyotr Dubrov monitored the Progress spacecraft’s final approach, ready to issue commands or take over manual control if necessary.

But the ship’s Kurs rendezvous radar guided the cargo freighter to a smooth docking three minutes earlier than scheduled.

“It doesn’t get much smoother than that — a flawless ride from the launch pad in Baikonur to docking at the International Space Station,” said Rob Navias, commentator for the docking coverage on NASA TV.

The Progress MS-18 spacecraft launched at 8 p.m. Wednesday (0000 GMT Thursday) from Baikonur atop a Soyuz-2.1a booster. The Soyuz rocket deployed the cargo craft in orbit less than nine minutes later, and the Progress supply ship unfurled its solar arrays and navigation antennas to begin the journey to the space station.

The Progress spacecraft took a two-day flight to the space station, and not the usual three- or six-hour trip, because the orbiting complex was not in the right position relative to the Baikonur launch base at liftoff time Wednesday to make the fast-track rendezvous possible.

Launching a crew or cargo mission on a quick rendezvous to the station requires the outpost to be nearly directly overhead the launch pad when a rocket takes off.

The Progress MS-18 spacecraft linked up with the rear docking port on Zvezda, near the location of a small air leak. Cosmonauts traced the leak, which remains minor, to the transfer compartment leading to Zvezda’s rear port.

The compartment has been sealed from the rest of the space station since the departure of a previous Progress spacecraft from the rear docking port in April. But cosmonauts will re-open the compartment to unload cargo delivered by the Progress MS-18 spacecraft.

The mission is the 79th Russian Progress supply craft to launch toward the International Space Station since 2000.

Progress MS-17 will undock from the space station next month to clear the way for arrival of another new Russian module, named Prichal, set for launch from Baikonur on Nov. 24.

Meanwhile, NASA is gearing up to launch four astronauts to the space station Sunday from Kennedy Space Center in Florida, weather permitting. The crew will ride a SpaceX Dragon capsule to the station to begin a six-month expedition in orbit, replacing an outgoing team of astronauts scheduled to return to Earth in early November.