Models shared exclusively with Breaking Defense offer a rare glimpse into nation-on-nation run-ins in space as satellites follow, flee, and, allegedly, listen in on each other. 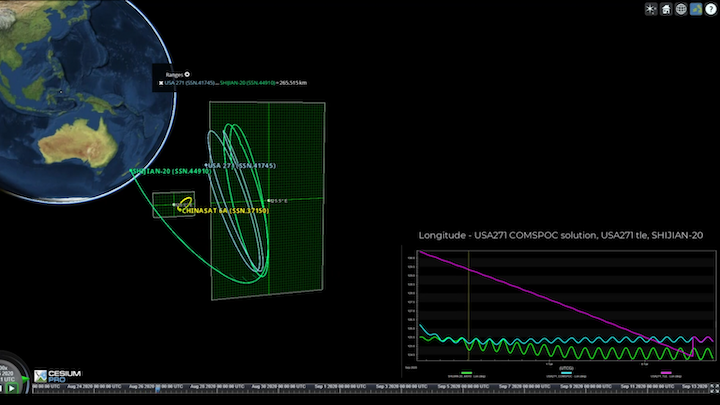 A screengrab of an encounter of an American and a Chinese satellite in space. (COMSPOC)

WASHINGTON: China has demonstrated the ability to track and maneuver a satellite with a remarkably high degree of precision, allowing the Chinese military to spot a US satellite moving close and then to redirect its own satellite away from the US bird in little more than 24 hours, according to never-before-seen video recreations.

In a July 2021 incident, USA 271, a space surveillance satellite developed covertly by the Air Force and Orbital Sciences, approaches Chinese satellite SJ-20, the PRC’s heaviest and one of its most advanced satellites. The US satellite, part of the Geosynchronous Space Situational Awareness Program (GSAPP), shadows the Chinese bird in parallel. But then the Chinese clearly detect the US satellite and rapidly move theirs away. (Pro tip: If you look closely, you can see how close the two satellites are by looking under “Ranges” in the video below.)

This is a rare glimpse into the often highly classified realm of nation-to-nation run-ins in space — and potential future space warfare tactics — made possible by COMSPOC, a company that provides space tracking and other information to private companies and governments. While the US military tracks objects in space, it restricts data about those with national security implications — especially US spy sats. COMSPOC provided several videos illustrating various interactions to Breaking Defense for this report.

We’re leading and defining the next generation of UAS capabilities, learn how here.

“They start doing calibration maneuvers and they’re very, very small maneuvers, so it’s hard. It’s about having the right system that can process and detect those small maneuvers when you’re that close,” said Jim Cooper, lead for space situational awareness at COMSPOC.

In another example involving only Chinese spacecraft, the PLA in 2018 launched and deployed what the US suspects is a counterspace satellite known as the TJS 3 (Tongxin Jishu Shiyan). According to the COMSPOC data, TJS 3 took position in geosynchronous orbit (GEO), in parallel to its apogee kick motor (the upper stage of the rocket).

“You see, all of a sudden they’re both right there, maneuvered to change their orbits, and they did that at the exact same time, and then the exact same way,” Cooper explained about the May 2019 incident. “So those maneuvers were basically done in tandem with each other. And you can see that the apogee kick motor — which is basically a rocket body — is now flying where the TJS 3 counterspace platform used to be,” he said.

Why did an upper stage rocket remnant in GEO suddenly fire up thrusters and start moving parallel to the satellite it helped push into orbit?

“What we think is happening here is the development and experimentation and validation of what we call a tactic, technique and procedure, a TTP, to spoof an enemy’s network for SSA [space situational awareness],” Cooper believes.

The maneuver occurred just as the day-night terminator passed by. “So we think that they timed this such that if an optical telescope was trying to look up there and see that maneuver, they would not catch it,” he said.

A country monitoring the Chinese bird would see this spent rocket body (the kick motor) now sitting where the payload was and mistake the kick motor for the satellite. Right after that happens, TGS 3 leaves the area — a very large maneuver. That, Cooper says, could gain China several days of freedom during which they could “be off doing things that are potentially threatening” while the other country has lost track of where the Chinese satellite is.

China certainly isn’t alone in its ability to move its satellites and control them. Russia and the United States have both demonstrated this capability numerous times. Of course, as veteran space watchers know, there can be multiple applications for a satellite that can move with precision.

“There are good things happening in space today that includes things like on-orbit servicing, refueling, end-of-life disposal; all of those types of operations require satellites to get very close to and in some cases to dock with each other,” Cooper said. “But […] you can also do intentionally nefarious or threatening things with that same type of technology. What’s the actual intent as we watch this?”

Cooper said intent is “definitely” something Space Force and Space Command are concerned about.

“With that idea of space domain awareness comes understanding of the intent of the activities that they’re seeing,” he said.

The video above recounts the time in November 2019 that a Russian Luch/Olympsatellite approaches within 1.8 kilometers of an American commercial satellite, Intelsat 36, which provides service to sub-Saharan Africa and Asia .

“If they’re going to do something like this approach that close to another satellite, that could probably be deemed an irresponsible behavior,” Cooper said. “Even if they do have the precise SSA to define that Intelsat 36 orbit, you don’t know what Intelsat 36 is going to do next.”

Intelsat may be planning a maneuver, for example. If that happened, it could, Cooper noted, “very well end up in a disastrous collision because they’re that close to each other and neither of them knew what the other satellite was doing.”

Intelsat has seen this kind of behavior before, in 2015, when a Luch satellite took up position between two Intelsat satellites for five months. Space News reported at the time that this led to classified meetings among US government officials.

And that Russian satellite didn’t just pass by Intelsat 36, as the video below showing a year of the satellite’s progress makes clear, it soared by more than two dozen satellites, often pausing close to them.

In 2018 France’s Minister of the Armed Forces, Florence Parly, claimed that during the year before a Luch/Olymp spacecraft approached the Athena-Fidus satellite, a French-Italian satellite launched in 2014 and used for secure military communications and the planning of operations, according to The Associated Press. “Trying to listen to one’s neighbor is not only unfriendly It’s called an act of espionage,” Parly said at the time. Of course, a great deal of what goes on in space is espionage, and espionage is not illegal.

But what does this conduct say about Russian capabilities?

“First off, do they have the very, very precise space situational awareness on that Intel satellite to know specifically where it is,” Cooper said. “But what they’re doing, at least as far as we can conclude, is getting close enough to these other satellites, and you see, time-wise, they stay close to these other satellites for weeks or months at a time. And what they’re probably doing is getting inside that [satellite’s] uplink from the ground and collecting intelligence from that [operator’s] uplink to that satellite.”

“It’s clearly concerning from a commerce space technology perspective and if you’re the DoD, you want to be paying attention to these kinds of things,” he said. “But, obviously, one country can do things with one of its satellites around another one of its satellites and who’s to say they can’t do that, right?”

China has so far done what are called Rendezvous Proximity Operations (RPO) only with their own satellites, according to said Brian Weeden, a top military space expert at the Secure World Foundation. “As far as I know, China has never done an RPO with another country’s satellite,” he said.

The US had not released public data on RPOs performed by US satellites until the end of 2019, when they started releasing some data, he said.

“Apparently, they [DoD] have had multiple reviews of how to improve sharing. They are starting to provide more provisional information about some of these classified objects, but not all and not all the time,” Weeden said.

Now, none of this is a violation of international law. But these very close approaches, shadowing operations, spoofing and other actions do raise the risk of collisions.

“This all shows why there is an urgent need for the US, Russia, and China to talk about norms when it comes to close approaches and military activities in the GEO region,” Weeden said.

He pointed to the 1972 Incidents at Sea agreement between the Soviet Union and the US as a good example. “We need an Incidents in Space agreement.”

One of the key reasons for such an agreement would be to limit the fast-growing problem of space debris. The Defense Department currently tracks more than 27,000 objects in space, most of which is debris — such as defunct rocket bodies, according to NASA.