Australia’s Parkes Observatory detected an ET-like pattern that suggested something was out there. But it was just a case of mixed signals 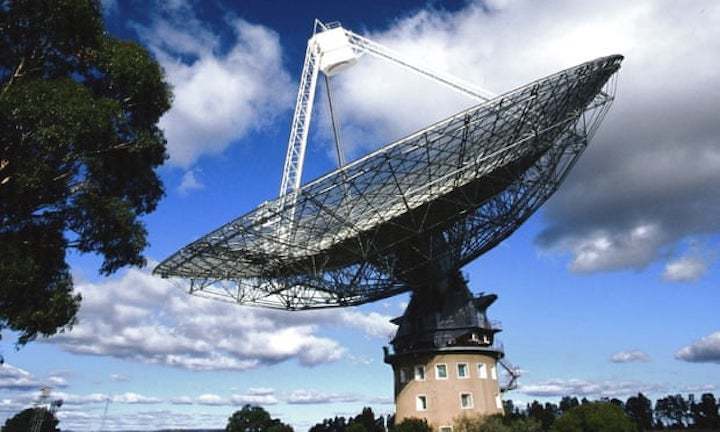 Astronomers searching for alien life thought they’d spotted signs of intelligence beyond the solar system – but the signals turned out to be human.

Proxima Centauri is a mere 4.24 light years away, and is orbited by two planets. One of them is Earth-like and thought to be in the “habitable zone” where liquid water exists. (Although the exoplanet has been blasted by extreme flares from the red dwarf star, making it less hospitable.)

Scientists involved in the search for extraterrestrial intelligence (Seti) processed the signals and thought they could be a “technosignature”, evidence of alien technology. But it was not to be.

In two articles, written by an international team and published in the journal Nature Astronomy on Tuesday, researchers reported while the signals were “broadly consistent” with a technosignature, they were most likely an “intermodulation”.

Co-author on both papers Dr Danny Price said they still don’t know exactly what caused the ET-like pattern, but used the analogy of a guitar amplifier to explain what happened.

“We think it was an intermodulation, which happens in an amplifier when you have more than one frequency running through it,” Price, who also works for the Curtin University node of the International Centre for Radio Astronomy Research, said.

“In a guitar amp, for example, if you’re listening to rock, to Nirvana or Black Sabbath, the guitar has a distinct distorted tone. That’s because you’re deliberately tuning the amps and going into overdrive.

“You take the frequencies and make new frequencies. We don’t think it’s being done on purpose, it’s just an amplifier not acting properly.

“It’s more than one signal and they have mixed together in a complicated way.”

Price said to think about “turning it up to eleven”, as in the mockumentary This Is Spinal Tap.

So somewhere in the area around Parkes, some malfunctioning device made it look as though someone – or something – was out there.

Radio frequency interference (Rfi) is such a common problem for astronomers that they are constantly looking for quieter places to study the sky – such as the Square Kilometre Array, which is being built in Western Australia’s vast outback.

United States space agency Nasa is even planning to put a radio telescope on the far side of the moon, where it will be shielded from Earth’s cacophony.

A microwave oven was famously responsible for a mystery that plagued CSIRO scientists for 17 years. If the microwave was opened while it was still heating, the telescope registered a signal that looked like it came from the atmosphere. Back in the 1960s, a pulsar star was mistaken for signs of aliens.

The latest search is part of Seti’s Breakthrough Listen project, and the signals were the first candidate they were working on. A Guardian article last year revealed the $100m project was the first serious candidate since the “Wow! signal” in 1977, when astronomer Jerry Ehman circled a record of radio wave blasts and wrote “Wow!” next to them.

Previous patterns have turned out to come from Rfi.

Many things cause Rfi, Price said. Phones, satellites, basically anything that is used to communicated or transmit data.

So scientists have a rigorous process for weeding out the faux-alien signals.

Price said the signal mimicked the way Proxima Centauri moved as seen from Earth – more slowly than a plane or a satellite. They ruled out cheap electronics, which can cause Rfi, but in a “wiggly” way. Then they consulted a registry of broadcasts to be sure it wasn’t in the range of telecommunications or media.

“It passed all the tests that we went through,” he said.

The signal also showed a Doppler shift, the sort of change in frequency that shows an object is moving, such as when an ambulance is moving towards or away from you. That again pointed to it coming from a moving planet.

But in the end they found the signal matched others they know are from the Earthly realm, and the hopes of having spotted an alien civilisation were dashed.

It wasn’t in vain, though, Price said, because now they have developed a new framework to study future signals, a checklist that will be used around the world in the search for life outside it.

“We would love for it to have been a technosignature,” Price said. “But for now it’s an excellent case study.”

Radio signal seemed to originate from the star Proxima Centauri, and provided a helpful drill for future searches.

A radio signal detected by an Australian telescope in 2019, which seemed to be coming from the star closest to the Sun, was not from aliens, researchers report today in two papers in Nature Astronomy1,2.

“It is human-made radio interference from some technology, probably on the surface of the Earth,” says Sofia Sheikh, an astronomer at the University of California (UC), Berkeley, and a co-author of both papers.

But the disturbance, detected by Breakthrough Listen — an ambitious and privately funded US$100-million effort in the search for extraterrestrial intelligence (SETI) — looked intriguing enough at first that it sent astronomers on a nearly yearlong quest to understand its origins. It was the first time that data from Breakthrough Listen triggered a detailed search, and the experience puts scientists in a better position to study future candidate detections.

“It’s really valuable for us to have these dry runs,” says Jason Wright, an astronomer at Pennsylvania State University in University Park. “We need these candidate signals so we can learn how we will deal with them — how to prove they are extraterrestrial or human-made.”

Since 2016, Breakthrough Listen has used telescopes around the world to listen for possible broadcasts from alien civilizations. The programme has picked up millions of radio blips of unknown origin, nearly all of which could be swiftly classified as coming from radio interference on Earth, from sources such as mobile-phone towers or aircraft radar.

The 2019 signal was different. It was detected by the 64-metre Parkes Murriyang radio telescope in southeastern Australia and came from the direction of Proxima Centauri — the nearest star to the Sun, just 1.3 parsecs (4.2 light years) away. Proxima Centauri is of intense interest to SETI researchers, not just because it is nearby. The star has at least two planets, one of which orbits at the right distance for liquid water to be present on its surface — a prerequisite for life as it exists on Earth3. A sibling initiative to Breakthrough Listen, known as Breakthrough Starshot, aims to send a tiny spacecraft to this planet in the future to look for life there.

The mysterious signal was first spotted last year by Shane Smith, an undergraduate student at Hillsdale College in Michigan, who was working as a research intern with Breakthrough Listen. Smith was combing through data that Parkes collected over six days in April and May the previous year. The telescope had been making observations in the direction of Proxima Centauri for 26 hours. It was not hunting specifically for aliens at the time, but was instead monitoring flares on the star’s surface, which could hurt the chances for life to arise on nearby planets.

The data included more than 4 million signals from the vicinity of the star, but Smith noted one signal near 982 megahertz that seemed to originate from the star itself and lasted about 5 hours. "I was excited to find a signal that matched all the criteria I was looking for, but I immediately remained skeptical of it and thought there had to be some simple explanation," Smith says. "I did not ever think the signal would cause such excitement."

Smith shared the information with his supervisor Danny Price, who posted it on a Breakthrough Listen Slack channel, and the team started investigating in earnest. “My first thought was that it must be interference, which I guess is a healthy attitude, to be sceptical,” says Price, an astronomer at UC Berkeley and the Breakthrough Listen project scientist in Australia. “But after a while I started thinking, this is exactly the kind of signal we’re looking for.”

The signal, named BLC1 for “Breakthrough Listen candidate 1”, was the first to pass all of the programme’s initial screening tests to rule out obvious sources of interference. “It definitely had me wondering ‘what if?’ for a bit,” says Sheikh.

She, Price and a large group of colleagues began working through possible explanations, from uncatalogued satellites to transmissions from planetary spacecraft. In Australia, the radio-frequency band around 982 megahertz is primarily reserved for aircraft, but the scientists could not identify any aeroplanes that had been in the area and could account for the signal — and certainly not one lasting 5 hours.

In November 2020, and in January and April of this year, the researchers pointed the Parkes telescope at Proxima Centauri to see if they could pick up the signal again. They could not.

Eventually, the team spotted other signals in the original data that looked a lot like the 982-megahertz signal but were at different frequencies. These signals had been tossed out by the team’s automated analysis as being earthly interference. Further analysis showed that BLC1 and these ‘lookalike’ signals were all interference from an unknown source. The signals had modulated and muddied one another, much as a guitar amplifier modulates and distorts a guitar note, which is what made it so difficult to identify BLC1 as interference.

Because the signal didn’t re-appear in the 2020 and 2021 observations, it might have been coming from malfunctioning electronic equipment that got shut down or fixed, says Sheikh. The team suspects the equipment was relatively close to Parkes, perhaps within a few hundred kilometres. The frequency of the signal drifts in a way that is consistent with inexpensive crystal oscillators such as those commonly used in computers, phones and radios, says Dan Werthimer, a SETI astronomer at UC Berkeley who specializes in signal processing.

Working with another student, Sheikh is now using machine-learning algorithms to tease out what frequency the interfering equipment was transmitting at, which might help to track down its source. One lingering mystery is why the signal seemed to appear only when the telescope was pointed at Proxima Centauri. That might just be an unfortunate coincidence, if the cadence of the interference mimicked the cadence with which the telescope was looking at the star.

Radio interference has bedevilled other astronomical searches before, such as when flickering signals picked up at Parkes turned out to be the result of people microwaving their lunches4. The famous ‘Wow!’ signal, detected in 1977 by a radio telescope in Ohio, was a powerful blip so intriguing that the observing scientist scribbled “Wow!” in the margins of the computer printout — but its origin could never be traced.

Alien searches have become much more sophisticated since then, Sheikh notes. “Many groups assumed that if you had a detection that only showed up when you were pointed at the source, that was it, break out the champagne, you’re done,” she says. “As technology changes, the way we vet signals also has to change — and that hadn’t come together until BLC1.” One of the Nature Astronomy papers features a detailed checklist to help astronomers determine whether their signal is truly from aliens or not.

“The Universe gives us a haystack,” says Ravi Kopparapu, a planetary scientist at NASA’s Goddard Space Flight Center in Greenbelt, Maryland. “It is our need to find the needle in it, and make sure that it is actually a needle that we found.”