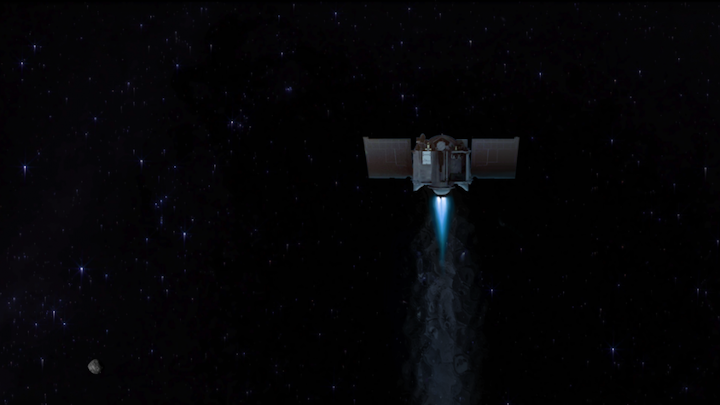 NASA’s asteroid explorer has begun its long journey home with precious cargo onboard: samples of the asteroid Bennu.

It has been worth the wait. After five years on mission, including more than two years spent exploring the 500-meter asteroid 101955 Bennu, NASA’s Origins, Spectral Interpretation, Resource Identification, Security, Regolith Explorer (OSIRIS-REX) burned its thrusters for seven minutes on Monday, May 10th. This burn set the spacecraft moving 1,000 kilometers per hour (600 mph) relative to the asteroid to start its 2.5-year journey home to Earth.

“Our whole mindset has been, ‘where are we in space relative to Bennu?’” says Mike Moreau (NASA-Goddard Spaceflight Center) in a recent press release. “Now our mindset has shifted to ‘where is the spacecraft in relation to Earth?’”

Now, the spacecraft will orbit the Sun twice interior to the orbit of Venus, before making a flyby of the Earth on September 24, 2023. Then, the sample return capsule will separate from the spacecraft, for a parachute reentry over the Utah Test and Training Range in the Utah desert. This isn’t without risk: in 2004, the Genesis sample return capsule slammed into the Utah desert floor when its drogue chute failed to open.

OSIRIS-REX arrived at Bennu in December 2018 and spent several months mapping the asteroid from afar before approaching it up close. The mission's climax occurred on October 20, 2020, when the spacecraft approached the Nightingale site, touched the surface of the asteroid for six seconds, and fired a burst of nitrogen gas through its Touch and Go, Sample Acquisition Mechanism (TAGSAM) arm to collect bits of rock from the surface.

The sampling maneuver proved to be more than successful, as the SamCam imager revealed the TAGSAM head was overflowing with material, slowly escaping though an open flap. Engineers made the quick decision to immediately stow the sample before losing any further material, forgoing the optional spin test to “weigh” the collected debris.

Even without the spin test, NASA is confident based on visual inspection that the maneuver collected between 400 grams and 1 kilogram of regolith — well over the mission goal of 60 grams. The samples collected by OSIRIS-REX represent pristine remnants of the early solar system — not to mention NASA's biggest sample return since the Apollo era.

The asteroid held its share of surprises and challenges for the mission team. Bennu's surface turned out to be rougher than expected, strewn with large boulders that made sample site selection challenging. Despite the potential hazards, sample collection was successful. A last pass 3.5 kilometers over the Nightingale site, completed before the team switched off navigation cameras on April 9th, showed the impression the spacecraft made upon landing.

Now, engineers will periodically check in on the spacecraft, making course corrections as needed. If everything goes as planned, OSIRIS-REX should have lots of fuel remaining post-Earth flyby. In fact, it’s not out of the question that the spacecraft might head toward a secondary target. Both Japan’s Hayabusa 2 and China’s Chang’e 5 lunar sample collector, which completed their primary missions in 2020, are now headed toward new targets.

It has been a long journey already, and miles left to cover, but it will be exciting to see the sample return capsule streaking across the Utah sky come late 2023. 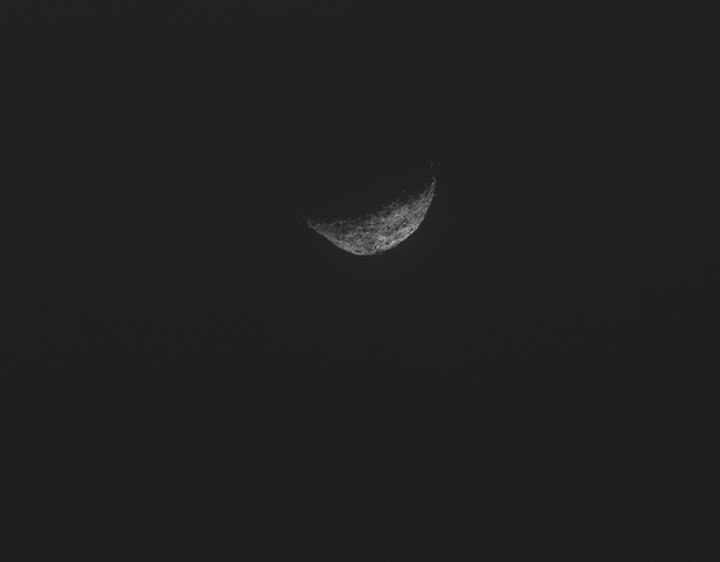 On April 9, 2021, NASA's Origins, Spectral Interpretation, Resource Identification, Security, Regolith Explorer (OSIRIS-REx) spacecraft took one last look at Bennu, the asteroid from which it scooped up a sample last October. Slated for return to Earth in 2023, the mission is on track to deliver a sample of pristine material left over from the formation of our solar system into the hands of researchers on Earth.

This image, the last one taken by the spacecraft, shows crescent Bennu with its night side merging with the complete black of space as the spacecraft pushed away from Bennu.

For two years, OSIRIS-REx studied the asteroid, revealing the many secrets of this ancient body and delivering clues about its rubble-pile-like consistency and surface terrain, which turned out to be much rockier and more rugged than initially expected from the observations of ground-based telescope.

On May 10, 2021, the spacecraft embarked on its return voyage to Earth. On Sept. 24, 2023, the spacecraft will jettison the sealed capsule containing the sample and send it onto a trajectory to touch down in the Utah desert. 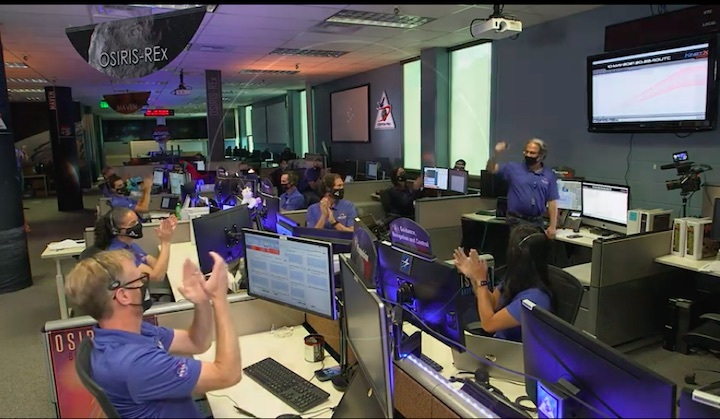 NASA's OSIRIS-REx spacecraft is 328,000 miles, or 528,000 kilometers, away from the asteroid Bennu, having fired its engines on May 10 to initiate a return trip to Earth. The spacecraft is on track to deliver an asteroid sample to Earth on September 24, 2023.

Mission engineers had planned to do a small thruster firing last week to ensure the spacecraft stays on the correct path back to Earth. But, the May 10 departure maneuver was calculated and executed so precisely, the mission team decided not to do a clean-up maneuver last week.

The next possible maneuver adjustment could occur in 2022.

After nearly five years in space, NASA’s OSIRIS-REx spacecraft is on its way back to Earth with an abundance of rocks and dust from the near-Earth asteroid Bennu.
Credits: NASA's Goddard Space Flight Center

NASA Mission helps solve a mystery: why are some asteroid surfaces rocky? 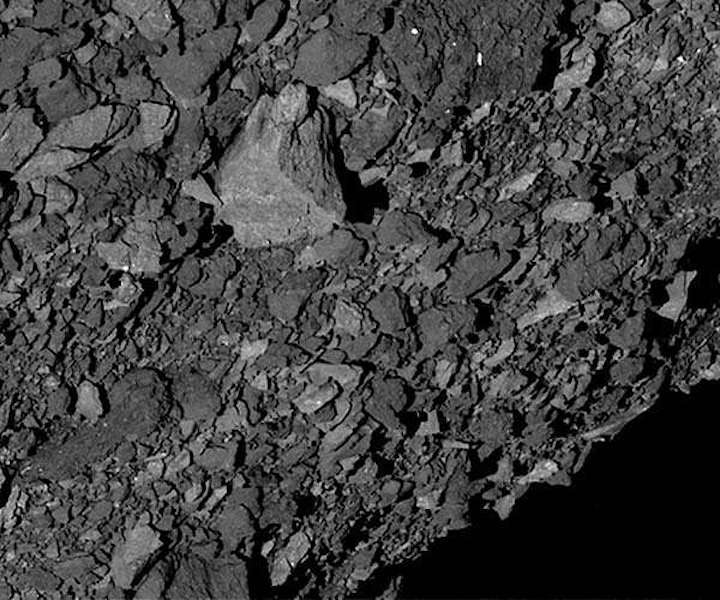 This image shows a view of asteroid Bennu's surface in a region near the equator. It was taken by the PolyCam camera on NASA's OSIRIS-REx spacecraft on March 21, 2019 from a distance of apx 3.5 km.

Scientists thought Bennu's surface was like a sandy beach, abundant in fine sand and pebbles, which would have been perfect for collecting samples. Past telescope observations from Earth had suggested the presence of large swaths of fine-grained material smaller than a few centimeters called fine regolith.

But when NASA's OSIRIS-REx mission arrived at Bennu in late 2018, the mission saw a surface covered in boulders. The mysterious lack of fine regolith became even more surprising when mission scientists observed evidence of processes potentially capable of grinding boulders into fine regolith.

New research, published in Nature and led by Saverio Cambioni, of the University of Arizona, used machine learning and surface temperature data to solve the mystery. Cambioni conducted the research at the university's Lunar and Planetary Laboratory. He and his colleagues ultimately found that Bennu's highly porous rocks are responsible for the surface's surprising lack of fine regolith.

"The 'REx' in OSIRIS-REx stands for Regolith Explorer, so mapping and characterizing the surface of the asteroid was a main goal," said study co-author and OSIRIS-REx Principal Investigator Dante Lauretta, a Regents Professor of Planetary Sciences at the University of Arizona.

"The spacecraft collected very high-resolution data for Bennu's entire surface, which was down to 3 millimeters per pixel at some locations. Beyond scientific interest, the lack of fine regolith became a challenge for the mission itself, because the spacecraft was designed to collect such material."

A Rocky Start and Solid Answers "When the first images of Bennu came in, we noted some areas where the resolution was not high enough to see whether there were small rocks or fine regolith. We started using our machine learning approach to distinguish fine regolith from rocks using thermal emission (infrared) data," Cambioni said.

The thermal emission from fine regolith is different from that of larger rocks, because the size of its particles controls the former, while the latter is controlled by rock porosity. The team first built a library of thermal emissions associated with fine regolith mixed in different proportions with rocks of various porosity. Next, they used machine-learning techniques to teach a computer how to "connect the dots" between the examples, Cambioni said. They analyzed 122 areas on the surface of Bennu, that were observed both during the day and the night.

"Only machine learning could efficiently explore a dataset this large," Cambioni said.

Cambioni and his collaborators found something surprising when the data analysis was completed: the fine regolith was not randomly distributed on Bennu. Instead, it was up to several tens of percent in those very few areas where rocks are non-porous, and systematically lower where rocks have higher porosity, which is most of the surface.

The team concluded that very little fine regolith is produced from Bennu's highly porous rocks because these are compressed rather than fragmented by meteoroid impacts. Like a sponge, the voids within rocks cushion the blow from incoming meteoroids. These findings are also in agreement with laboratory experiments from other research groups.

"Basically, a big part of the energy of the impact goes into crushing the pores restricting the fragmentation of the rocks and the production of new fine regolith," said study co-author Chrysa Avdellidou, a postdoctoral researcher at the French National Centre for Scientific Research (CNRS) - Lagrange Laboratory of the Cote d'Azur Observatory and University in France. Additionally, Cambioni and colleagues showed that cracking caused by the heating and cooling of Bennu's rocks as the asteroid rotates through day and night proceeds more slowly in porous rocks than in denser rocks, further frustrating the production of fine regolith.

"When OSIRIS-REx delivers its sample of Bennu (to Earth) in September 2023, scientists will be able to study the samples in detail," said Jason Dworkin, OSIRIS-REx project scientist at NASA's Goddard Space Flight Center in Greenbelt, Maryland. "This includes testing the physical properties of the rocks to verify this study."

Other missions have evidence to support the team's findings. The Japan Aerospace and Exploration Agency (JAXA) Hayabusa2 mission to Ryugu, a carbonaceous asteroid like Bennu, found that Ryugu also lacks fine regolith and has high-porosity rocks. Conversely, JAXA's Hayabusa mission in 2005 revealed abundant fine regolith on the surface of asteroid Itokawa, an S-type asteroid with rocks of a different composition than Bennu and Ryugu. A previous study also from Cambioni and colleagues provided evidence that its rocks are less porous than Bennu's and Ryugu's using observations from Earth.

"For decades, astronomers disputed that small, near-Earth asteroids could have bare-rock surfaces," said study co-author Marco Delbo, research director with CNRS, also at the Lagrange Laboratory. "The most indisputable evidence that these small asteroids could have substantial fine regolith emerged when spacecraft visited S-type asteroids Eros and Itokawa in the 2000s and found fine regolith on their surfaces."

The team predicts that large swaths of fine regolith should be uncommon on carbonaceous asteroids, the most common of all asteroid types observed, and which the team expects to have high-porosity rocks like Bennu. By contrast, they predict terrains rich in fine regolith to be common on S-type asteroids, the second-most populous type of asteroids observed in the solar system, which they expect to have denser, less porous rocks than carbonaceous asteroids.

"This is an important piece in the puzzle of what drives the diversity of asteroids' surfaces," Cambioni said. "Asteroids are thought to be relics of the early solar system, so understanding the evolution they have undergone in time is crucial to comprehend how the solar system formed and evolved. Now that we know this fundamental difference between carbonaceous and S-type asteroids, future teams can better prepare sample collection missions depending on the nature of the target asteroid."

Cambioni is continuing his research on planetary diversity as a distinguished postdoctoral fellow in the Department of Earth, Atmospheric and Planetary Sciences at the Massachusetts Institute of Technology.