Canoo's customized Lifestyle Vehicles for NASA will need to be delivered by June of next year. 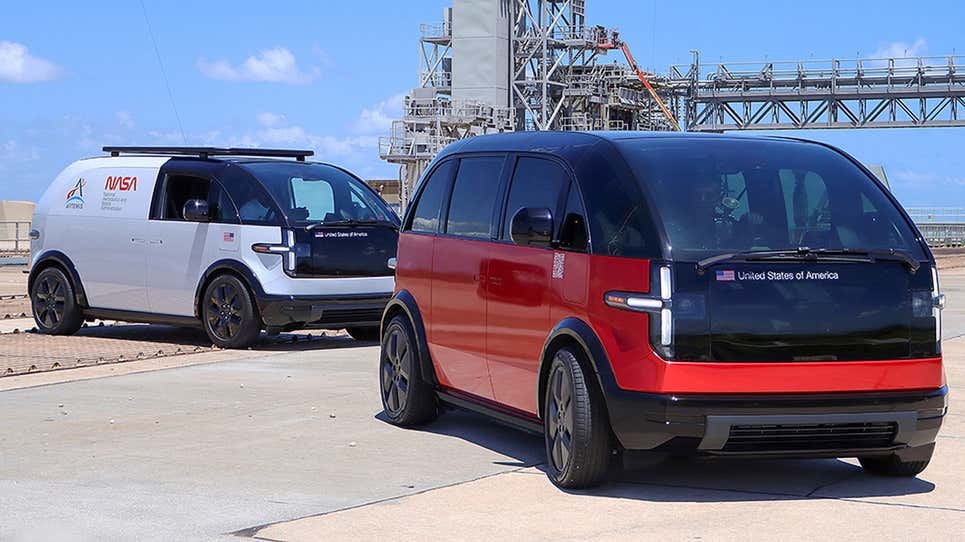 When Canoo won NASA’s contract for an all-electric crew transport vehicle in April, the brief issued to the startup was pretty straightforward. NASA needed vehicles capable of ferrying crew and astronauts, outfitted in all their gear plus equipment, to and from the suiting facility and pad with a minimum 50-mile range. Canoo hasn’t had the easiest time getting its production line humming along, so we had some reservations that the company would be able to execute, but this week Canoo brought a trio of working prototypes to the Kennedy Space Center.

The transporters are based on Canoo’s Lifestyle Vehicle, or LV for short. From the outside, these red, white and blue examples pretty much look the same as the consumer models, with a touch of tastefully-applied NASA branding.

The white one has been done up as a panel van, with no second-row side windows or rear glass, echoing the Delivery configuration on Canoo’s website. Given limited shots of the interior, that’s about all we can see; it’s unclear to what extent these vans were customized for NASA, or are essentially retail-grade vehicles adorned with NASA liveries.

The vans will need to seat eight — that’s four astronauts, three crew personnel and a driver — in addition to the following cargo, per SAM.gov:

The Canoo LV looks roomy, but that’s a lot to pack in. The doors will also have to be two feet wide at minimum, so that astronauts can enter and exit the vehicle in their suits.

Now, this is a cool moment for Canoo, and the transporters look great, but the company is going to need more than NASA’s support if it wants to last long enough to deliver these vehicles by June 2023, ahead of the Artemis mission. The road to sustainability for any new EV maker is craggy to say the least, and Canoo’s recent earnings reports are proof positive of that. The startup was trading at $2.03 — almost its lowest recorded — as of Thursday morning, miles away from its last big peak of $12.89 in November.

Despite the headwinds, Canoo is still pledging to deliver vehicles, with a starting price a shade under $35K, by the end of this year. “Make-or-break” time indeed — with the added pressure of a mission to the moon for good measure.