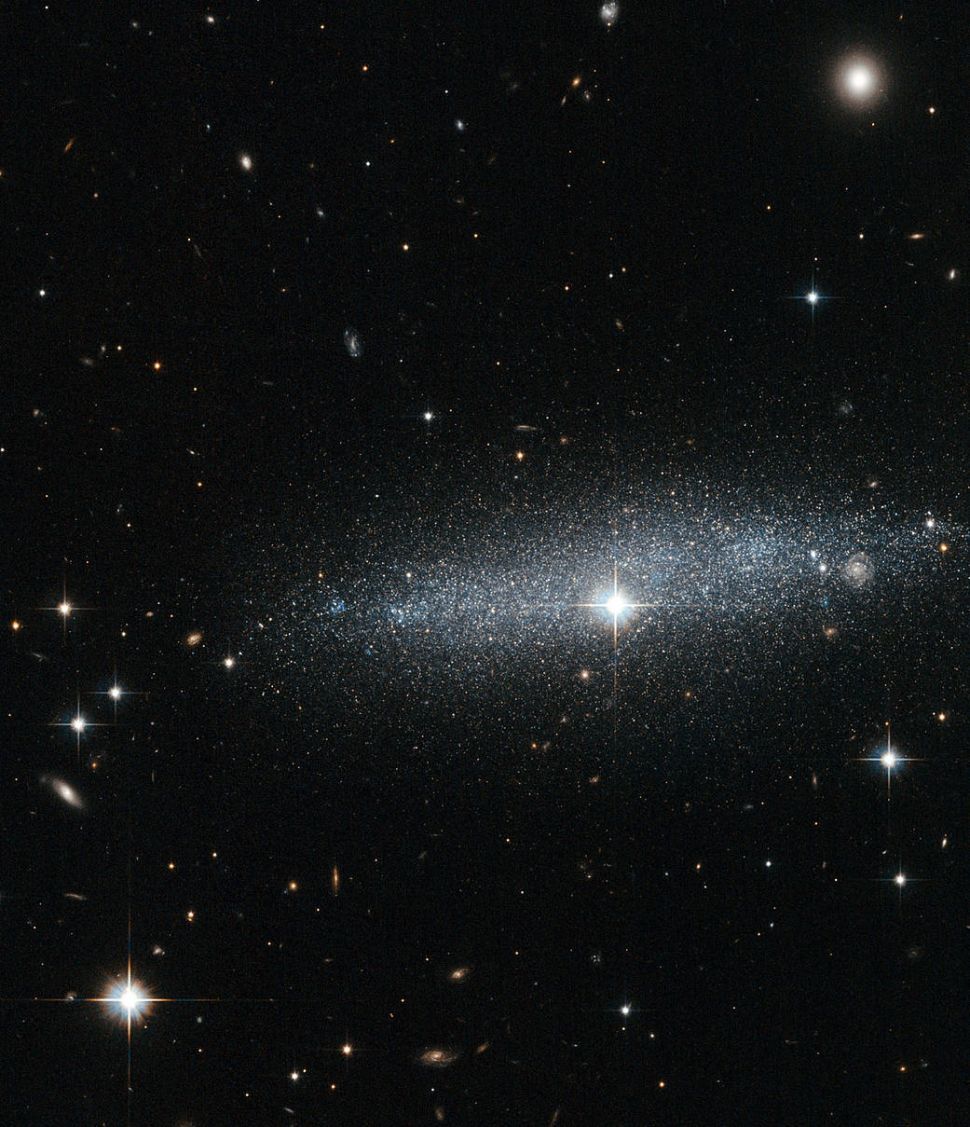 A close-up view of the dwarf galaxy ESO 318-13 about 30-million light-years from Earth as seen by the Hubble Space Telescope. (Image credit: NASA/ESA)

For over three decades, the indefatigable Hubble Space Telescope has been providing stunning peeks into the myriad mysteries of the universe, helping astronomers, physicists, and scientists of all stripes to understand more about galaxies, exoplanets, moons and stars than ever before.

Check out this classic galactic tableau originally captured by the Hubble telescope in 2012 (NASA recently released it this month) to point out how optical tricks of perspective can alter our conclusions about what appears to be the truth.

Focus on the crowded cloud of stars in the center of this jaw-dropping image. What you're seeing is the galaxy ESO 318-13 in the southern constellation of Antlia (The Pump). Located some 30 million light-years from Earth and known affectionately as the Glitter Galaxy, the tiny ESO 318-13 is an oval-shaped irregular dwarf galaxy that's roughly 1% the mass of the Milky Way.

"ESO 318-13 is sandwiched between a vast collection of bright celestial objects," NASA officials wrote in a June 15 image description(opens in new tab). "Several stars near and far dazzle in comparison to the neat dusting contained within the galaxy."

Here ESO 318-13 is seen positioned between an impressive scattering of ultra-bright celestial objects. Many neighboring stars shining both near and far catch our eye when compared to the close-knit family of the Glitter Galaxy, especially one high-wattage specimen right in the middle.

"One that particularly stands out is located near the center of the image, and looks like an extremely bright star located within the galaxy. This is, however, a trick of perspective," NASA wrote. "The star is located in the Milky Way, our own galaxy, and it shines so brightly because it is so much closer to us than ESO 318-13."

Those colorful glowing disks dotting the rest of the image's frame are galaxies spinning even further away. Targeting the top right corner, a glaring elliptical galaxy can be clearly observed that's far more massive than ESO 318-13 but is at an even greater distance.

And in a case of overlapping galaxies, we can see a remote spiral galaxy trying to be noticed through the virtually dust-free expanse of ESO 318-13 at the far right-hand edge of this sweeping false-color photo.