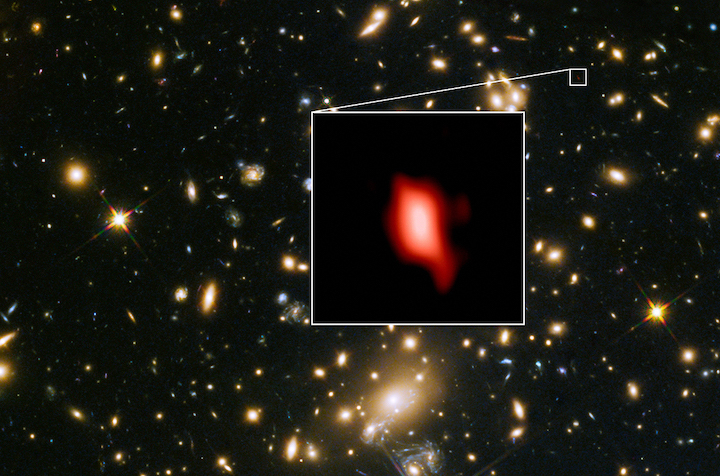 In this Hubble Space Telescope image, the gravity from a cluster of galaxies helps to magnify the galaxy MACS1149-JD1 (inset), the most distant rotating disk known.NASA

Astronomers have detected the rotation of a galaxy dating back to just 550 million years after the big bang, when the universe was 4% of its current age. The rotation suggests this baby galaxy was not an amorphous blob but rather an organized disk, just like the Milky Way and similar galaxies that have had more than 13 billion years to mature. It’s yet more evidence that galaxies grow and evolve faster than theorists had expected.

Stars coalescing into a disk so early on doesn’t counter existing theories, but it does stretch them, says Sarah Bosman of the Max Planck Institute for Astronomy, who was not involved in the research. “It’s just about possible this early.”

The stars in this trendsetting galaxy were also mature, indicating they formed 300 million years earlier, when the universe was just 250 million years old. That’s good news for the upcoming James Webb Space Telescope—launched last year and expected to start science operations next month. If these first galaxies gave birth to lots of stars in a burst early on, they will likely be “luminous enough for Webb to see,” says Richard Ellis, an astronomer at University College London and co-author of the new study. Astronomers hope the $10-billion instrument will reveal a wealth of early galaxies, rather than just the biggest, brightest outliers, so they can understand how these early agglomerations formed and evolved.

The galaxy, called MACS1149-JD1 or just JD1 for short, is not the most distant known, but it is now the most distant galaxy with anything known about its dynamics. The team, including Ellis, discovered JD1 in 2018 as an indistinct smudge in images from the Atacama Large Millimeter/submillimeter Array (ALMA), a collection of 66 radio telescopes high in the Chilean Andes, and the European Southern Observatory’s Very Large Telescope, also in Chile. From its color, Ellis and his colleagues knew at least some of its stars were mature, because they tend to redden with age. But the team didn’t know about how those stars were organized.

They decided to take a longer and closer look with ALMA. Such telescope arrays have an ability to “zoom in” by spreading the dishes further apart and combining their signals through a process known as interferometry. The team observed JD1 when the dishes were spread over an area 2.5 kilometers across, giving the sharpness of vision of a single dish of that size.

When astronomers look at such distant objects, their light is shifted toward the red end of the spectrum because photons become stretched by the expansion of the universe during their flight. The degree of this “redshift” tells astronomers how distant the object is. With the new high-resolution image of JD1, the researchers could also see tiny differences in redshift across the face of the galaxy, the sort of variations you would expect from a rotating object in which one part was moving toward the observer and the other away. As the team reports today in Astrophysical Journal Letters, there was a difference in velocity of 120 kilometers per second between one side of the galaxy and the other. “We were very excited when we saw the velocity map,” Ellis says.

The researchers put the velocity distribution into a galaxy model and it fit well with a disk galaxy having a mass between 1 billion and 2 billion Suns. This is tiny compared with the Milky Way, which contains 1 trillion solar masses, and JD1 consequently rotates more slowly than our galaxy, at around one-quarter of our galaxy’s speed. Finding a rotating galaxy so early in the universe’s history is “surprising,” Bosman says, but the data are “completely consistent with a disk.”

Astronomers won’t have to wait long to find out whether JD1 is one of a kind or if disk galaxies were common in the universe’s youth. Beginning in just a few weeks, the Webb telescope is expected to find many more galaxies in the universe’s first half billion years. “We’ll go from single-digit numbers to hundreds,” Bosman says. “At least I hope so!”