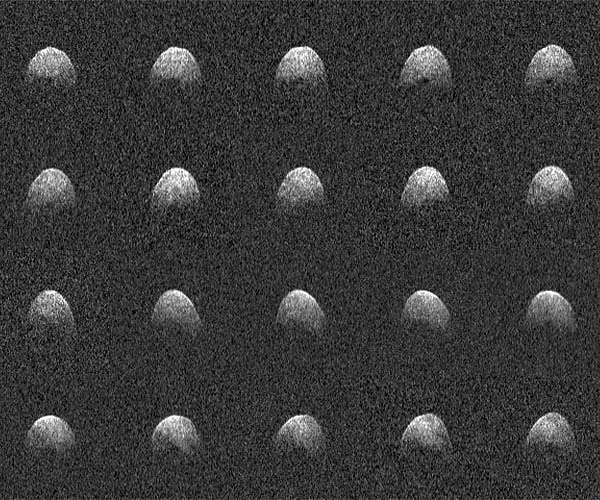 There are almost 30,000 known asteroids according to Center for Near Earth Studies and while few pose an immediate threat, there is a chance one of significant size could hit the earth and cause catastrophic damage. That's why the work of researchers like UCF's Luisa Fernanda Zambrano-Marin is so important. Photo: Stock image

When asteroid 2019 OK suddenly appeared barreling toward Earth on July 25, 2019, Luisa Fernanda Zambrano-Marin and the team at the Arecibo Observatory in Puerto Rico jumped into action.

After getting an alert, the radar scientists zoned in on the asteroid, which was coming from Earth's blind spot - solar opposition. Zambrano-Marin and the team had 30 minutes to get as many radar readings as they could. It was traveling so fast, that's all the time she'd have it in Arecibo's sights. UCF manages the Arecibo Observatory for the U.S. National Science Foundation under a cooperative agreement.

The asteroid made Arecibo Observatory scientists help unravel surprise asteroid mystery news because it appeared to come out of nowhere and was traveling fast.

Zambrano-Marin's findings were published in the Planetary Science Journal June 10, just a few weeks before the world observes Asteroid Day, which is June 30 and promotes global awareness to help educate the public about these potential threats.

"It was a real challenge," says Zambrano-Marin, a UCF planetary scientist. "No one saw it until it was practically passing by, so when we got the alert, we had very little time to act. Even so, we were able to capture a lot of valuable information."

Turns out the asteroid was between .04 and .08 miles in diameter and was moving fast. It was rotating at 3 to 5 minutes. That means it is part of only 4.2 percent of the known fast rotating asteroids. This is a growing group that the researchers say need more attention.

Zambrano-Marin is now inspecting the data collected through Arecibo's Planetary Radar database to continue her research. Although the observatory's telescope collapsed in 2020, the Planetary Radar team can tap the existing data bank that spans four decades. Science operations continue in the areas of space and atmospheric sciences, and the staff is refurbishing 12-meter antennae to continue with astronomy research.

"We can use new data from other observatories and compare it to the observations we have made here over the past 40 years," Zambrano-Marin says. "The radar data not only helps confirm information from optical observations, but it can help us identify physical and dynamical characteristics, which in turn could give us insights into appropriate deflection techniques if they were needed to protect the planet."

There are almost 30,000 known asteroids according to Center for Near Earth Studies and while few pose an immediate threat, there is a chance one of significant size could hit the earth and cause catastrophic damage. That's why NASA keeps a close watch and system to detect and characterize objects once they are found.

NASA and other space agencies nations have been launching missions to explore Near-Earth Asteroids to better understand what they are made of and how they move in anticipation of having to divert one heading for earth in the future.

The OSIRIS REx mission, which includes UCF Pegasus Professor of Physics Humberto Campins, is headed back to Earth with a sample of asteroid Bennu, which gave scientists a few surprises. Bennu was first observed at Arecibo in 1999.

A new mission - NASA's Double Asteroid Redirection Test (DART) mission - aims to demonstrate the ability to redirect an asteroid using the kinetic energy of a projectile. The spacecraft launched in November 2021 and is expected to reach its target - the Dimorphos asteroid - on September 26, 2022.

Zambrano-Marin and the rest of the team at Arecibo are working on providing the scientific community with more information about the many kinds of asteroids in the solar system to help come up with contingency plans.

This week the team at the Arecibo Observatory is holding a series of special events as part of the Asteroid Day awareness campaign. They include presentations, "ask a scientist" stations for those visiting the science museum at Arecibo, and on June 25 presentations about the DART mission in English and Spanish.

The timing couldn't be better as there are five known asteroids from the size of a car to a Boeing 747 that will be buzzing Earth before Asteroid Day, according to the Jet Propulsion Laboratory that keeps track of the celestial bodies for NASA. The closest approach is on June 25 with an object coming within 475,000 miles of Earth. For comparison, the moon is about 239,000 miles from Earth.

Zambrano-Marin has multiple degrees including a bachelor's degree in applied physics from the Ana G. Mendez University System and a master's in space sciences from the International Space University in France. She has published more than 20 articles and is a frequent speaker and presenter at conference around the world.

She previously worked at the Vatican Observatory and as a consultant to the Caribbean University president. In addition to working on the planetary radar group at Arecibo, Zambrano-Marin also created the Arecibo Observatory Space Academy, an 18-week research program for pre-college students in Puerto Rico.