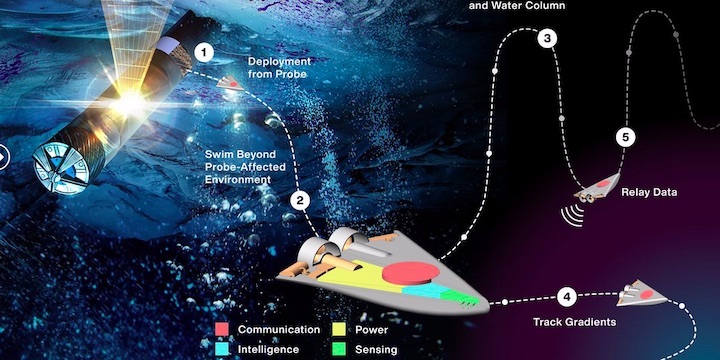 In the Sensing With Independent Micro-Swimmers (SWIM) concept, illustrated here, dozens of small robots would descend through the icy shell of a distant moon via a cryobot – depicted at left – to the ocean below. The project has received funding from the NASA Innovative Advanced Concepts program.

Someday, a swarm of cellphone-size robots could whisk through the water beneath the miles-thick icy shell of Jupiter’s moon Europa or Saturn’s moon Enceladus, looking for signs of alien life. Packed inside a narrow ice-melting probe that would tunnel through the frozen crust, the tiny robots would be released underwater, swimming far from their mothercraft to take the measure of a new world.

That’s the vision of Ethan Schaler, a robotics mechanical engineer at NASA’s Jet Propulsion Laboratory in Southern California, whose Sensing With Independent Micro-Swimmers (SWIM) concept was recently awarded $600,000 in Phase II funding from the NASA Innovative Advanced Concepts (NIAC) program. The funding, which follows his 2021 award of $125,000 in Phase I NIAC funding to study feasibility and design options, will allow him and his team to make and test 3D-printed prototypes over the next two years.

A key innovation is that Schaler’s mini-swimmers would be much smaller than other concepts for planetary ocean exploration robots, allowing many to be loaded compactly into an ice probe. They would add to the probe’s scientific reach and could increase the likelihood of detecting evidence of life while assessing potential habitability on a distant ocean-bearing celestial body.

“My idea is, where can we take miniaturized robotics and apply them in interesting new ways for exploring our solar system?” Schaler said. “With a swarm of small swimming robots, we are able to explore a much larger volume of ocean water and improve our measurements by having multiple robots collecting data in the same area.” 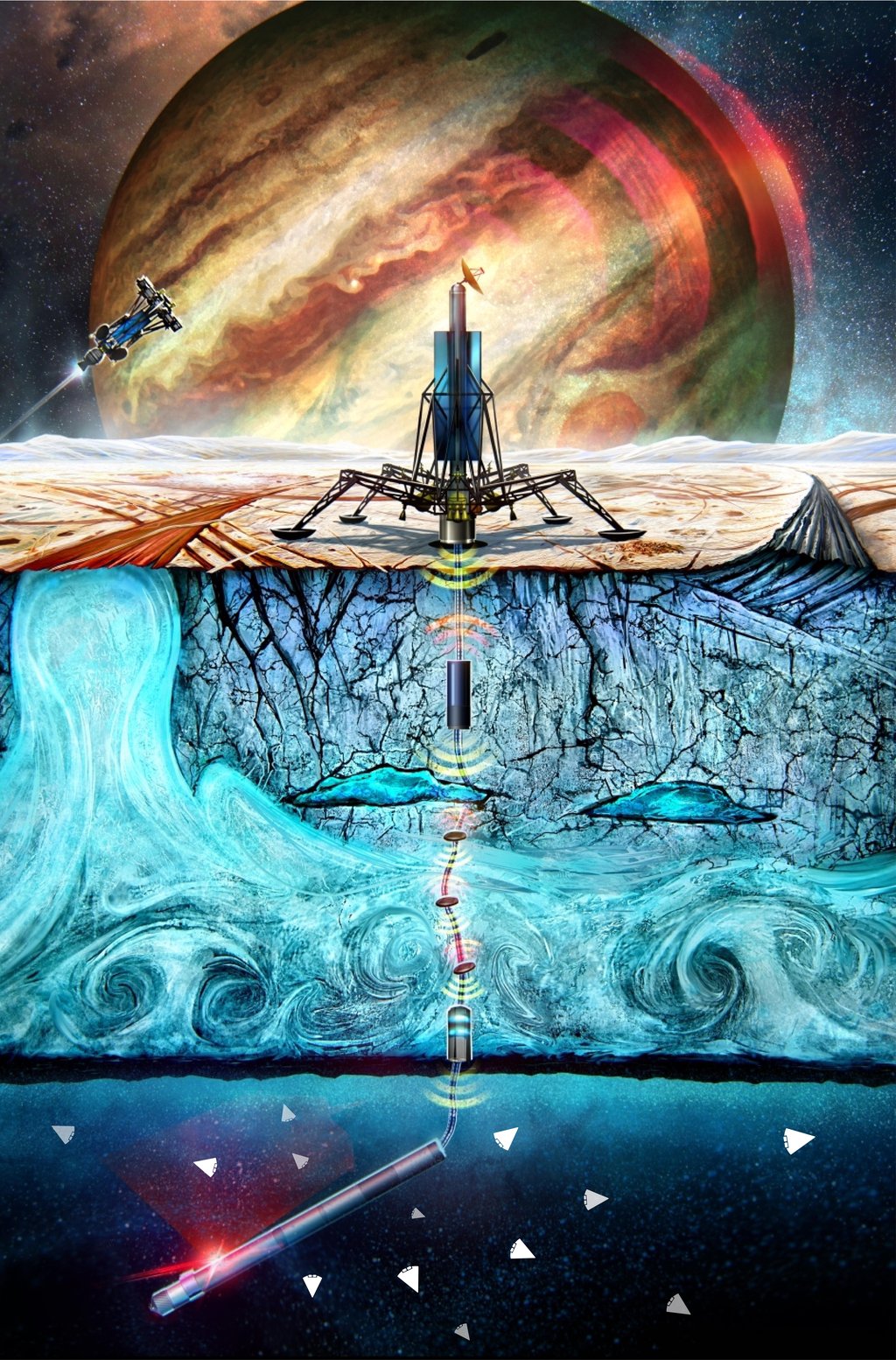 Not yet part of any NASA mission, the early-stage SWIM concept envisions wedge-shaped robots, each about 5 inches (12 centimeters) long and about 3 to 5 cubic inches (60 to 75 cubic centimeters) in volume. About four dozen of them could fit in a 4-inch-long (10-centimeter-long) section of a cryobot 10 inches (25 centimeters) in diameter, taking up just about 15% of the science payload volume. That would leave plenty of room for more powerful but less mobile science instruments that could gather data during the long journey through the ice and provide stationary measurements in the ocean.

The Europa Clipper mission, planned for a 2024 launch, will begin gathering detailed science during multiple flybys with a large suite of instruments when it arrives at the Jovian moon in 2030. Looking further into the future, cryobot concepts to investigate such ocean worlds are being developed through NASA’s Scientific Exploration Subsurface Access Mechanism for Europa (SESAME) program, as well as through other NASA technology development programs.

As ambitious as the SWIM concept is, its intent would be to reduce risk while enhancing science. The cryobot would be connected via a communications tether to the surface-based lander, which would in turn be the point of contact with mission controllers on Earth. That tethered approach, along with limited space to include large propulsion system, means the cryobot would likely be unable to venture much beyond the point where ice meets ocean.

“What if, after all those years it took to get into an ocean, you come through the ice shell in the wrong place? What if there’s signs of life over there but not where you entered the ocean?” said SWIM team scientist Samuel Howell of JPL, who also works on Europa Clipper. “By bringing these swarms of robots with us, we’d be able to look ‘over there’ to explore much more of our environment than a single cryobot would allow.”

Howell compared the concept to NASA’s Ingenuity Mars Helicopter, the airborne companion to the agency’s Perseverance rover on the Red Planet. “The helicopter extends the reach of the rover, and the images it is sending back are context to help the rover understand how to explore its environment,” he said. “If instead of one helicopter you had a bunch, you would know a lot more about your environment. That’s the idea behind SWIM.”

SWIM would also allow data to be gathered away from the cryobot’s blazing-hot nuclear battery, which the probe would rely on to melt a downward path through the ice. Once in the ocean, that heat from the battery would create a thermal bubble, slowly melting the ice above and potentially causing reactions that could change the water’s chemistry, Schaler said.

Additionally, the SWIM robots could “flock” together in a behavior inspired by fish or birds, thereby reducing errors in data through their overlapping measurements. That group data could also show gradients: temperature or salinity, for example, increasing across the swarm’s collective sensors and pointing toward the source of the signal they’re detecting.

“If there are energy gradients or chemical gradients, that’s how life can start to arise. We would need to get upstream from the cryobot to sense those,” Schaler said.

Each robot would have its own propulsion system, onboard computer, and ultrasound communications system, along with simple sensors for temperature, salinity, acidity, and pressure. Chemical sensors to monitor for biomarkers – signs of life – will be part of Schaler’s Phase II study.

NIAC is funded by NASA’s Space Technology Mission Directorate, which is responsible for developing the new cross-cutting technologies and capabilities needed by the agency. The program fosters exploration by funding early-stage studies to evaluate technologies that could support future aeronautics and space missions. Researchers across U.S. government, industry, and academia with high-impact ideas can submit proposals.