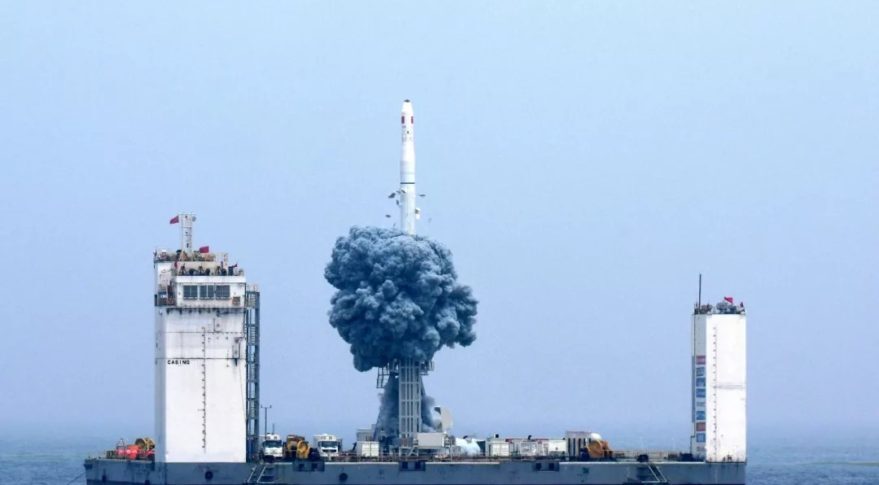 China has already demonstrated the ability to launch the Long March 11 solid rocket from sea platforms. These have been facilitated by a new spaceport near Haiyang in the eastern coastal province of Shandong.

The Haiyang seaport is attracting a range of space sector firms and is fostering an industry chain. Having so far used repurposed vessels, a 162.5-meter-long, 40-meters-wide “New-type rocket launching vessel” is under construction and expected to facilitate its first launch in 2022.

RSpace, a liquid rocket component startup, is now constructing a 230-acre manufacturing and testing facility for storage tanks and liquid rocket body structures at Haiyang, with a planned total investment of $119 million.

The project has received backing from the city and province and is listed as a key project for Shandong. The development indicates a concerted attempt to support liquid sea launches and its proximity would ease rocket transportation issues for customers.

Prospective clients include Orienspace, which was founded in late 2020 and raised $47 million and$59.9 million in pre-A and A-series funding rounds this year.

The firm is currently aiming to launch its Gravity-1 solid rocket in mid-2023. The Gravity-2 kerosene-liquid oxygen launcher is to follow.

Galactic Energy, a private launcher service provider, is planning to launch its third Ceres-1 solid rocket within the next couple of months, and could test a sea launch of the vehicle before the end of year.

It is unknown if the firm’s in-development Pallas-1 kerolox rocket will be adapted for sea launch. Pallas-1 is currently slated for a test flight in early 2023.

CALT has, similarly, recently established a nearby final assembly and test base which was used for the first time in May to support a Long March 11 sea launch of commercial remote sensing satellites.

CALT, one of China’s two main state-owned launch vehicle manufacturers and designers operating under the ownership of the China Aerospace Science and Technology Corp., is now also looking at adapting its new Long March 8 kerosene-liquid oxygen launcher for sea launch.

“This breakthrough in sea launch technology will enable China to launch medium and large satellites and constellations ‘both on land and sea’, especially into low-inclination low-Earth orbits, and it allows China to remain competitive in the fast-paced space industry,” a 2021 paper in the Chinese Journal of Aeronautics states.

The article looks at the prospects of sea launches for the yet-to-fly reusable version of the Long March 8, describing the prospective launcher as a “low-cost, highly reliable and easy-to-use vehicle, revised for commercial market, which is preferable for sea launches.”

Further studies into safety control of the launch site and drop zones for spent rocket stages are required, according to the authors, but also note the fewer constraints on launch and reusable launcher recovery at sea.

The Wenchang spaceport on Hainan island could potentially host sea launches, and has recently begun construction of a new launch complex for commercial launch.

The country has expanded the Jiuquan Satellite Launch Center in the Gobi Desert to host solid and liquid commercial rockets to help accommodate the rising demand for launch, while also establishing Haiyang for sea launches.

Wenchang and the city of Ningbo are also developing centers for commercial launch.