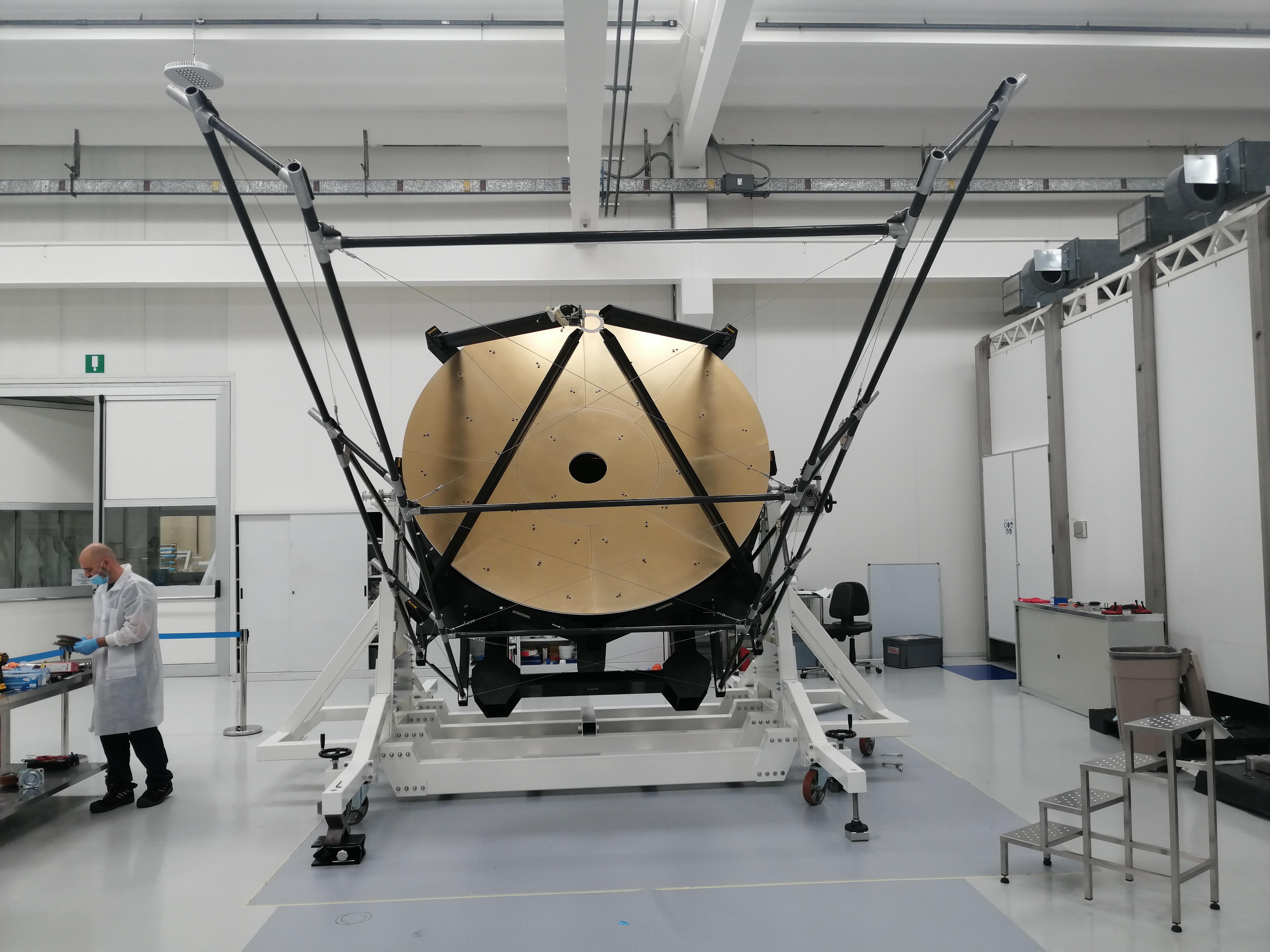 Telescopes designed to operate in space have to be constructed differently than those meant to operate on the ground. But what about telescopes that operate in between?

An upcoming NASA mission will use a balloon larger than a football field to send a telescope 130,000 feet (about 40,000 meters) above Antarctica. From that height, the telescope will study a phenomenon that chokes off star formation in some galaxies, effectively killing them.

The mission, called the Astrophysics Stratospheric Telescope for High Spectral Resolution Observations at Submillimeter-wavelengths, or ASTHROS, will use a primary mirror (this telescope’s main light-gathering tool) that’s tied for the largest ever to fly on a high-altitude balloon. Construction of the 8.2-foot (2.5-meter) mirror wrapped up this month. Designing and building it proved challenging because of two key demands: The mirror and its support structure must be exceptionally light to travel by balloon, yet strong enough to keep the pull of Earth’s gravity from deforming its almost perfect parabolic shape by any more than about 0.0001 inches (2.5 micrometers) – a fraction of the width of a human hair. 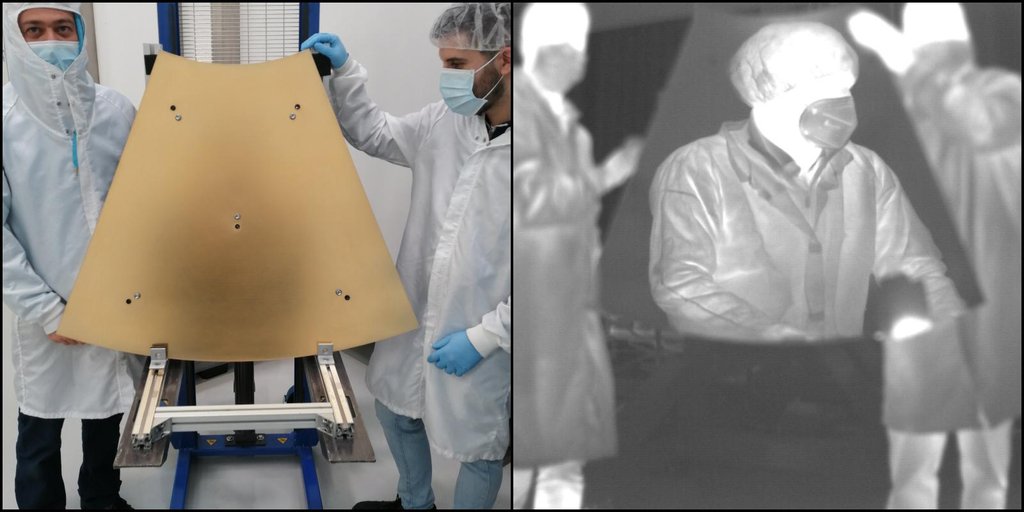 The gold-colored ASTHROS mirror panels appear blurry to the naked eye, as seen at left. But when photographed with an infrared camera, as at right, the panel reflects a technician's image as clearly as if the person were looking in a mirror.
Credit: Media Lario
Full Image Details

Managed by NASA’s Jet Propulsion Laboratory in Southern California, ASTHROS is set to launch no earlier than December 2023, circling the South Pole for up to four weeks. NASA’s Scientific Balloon Program, operated by the agency’s Wallops Flight Facility in Virginia, launches 10 to 15 balloon missions each year. These missions typically cost less than space missions and take less time to move from early planning to deployment, and they employ new technologies that can be used on future space missions.

High up in the stratosphere, ASTHROS will observe wavelengths of light that are blocked by Earth’s atmosphere, in a range called far-infrared. Its large mirror will enhance the telescope’s ability to observe fainter light sources and resolve finer details of those sources.

Those capabilities are essential to the mission’s approach to studying stellar feedback, the process by which clouds of gas and dust – the ingredients for making stars – are dispersed in galaxies, sometimes to the point that star formation halts entirely. Many processes contribute to feedback, including eruptions from living stars and the explosive deaths of massive stars as supernovae. ASTHROS will look at several star-forming regions in our galaxy where these processes take place, creating high-resolution 3D maps of the distribution and motion of gas. The mission will also look at distant galaxies containing millions of stars to see how feedback plays out at large scales and in different environments. 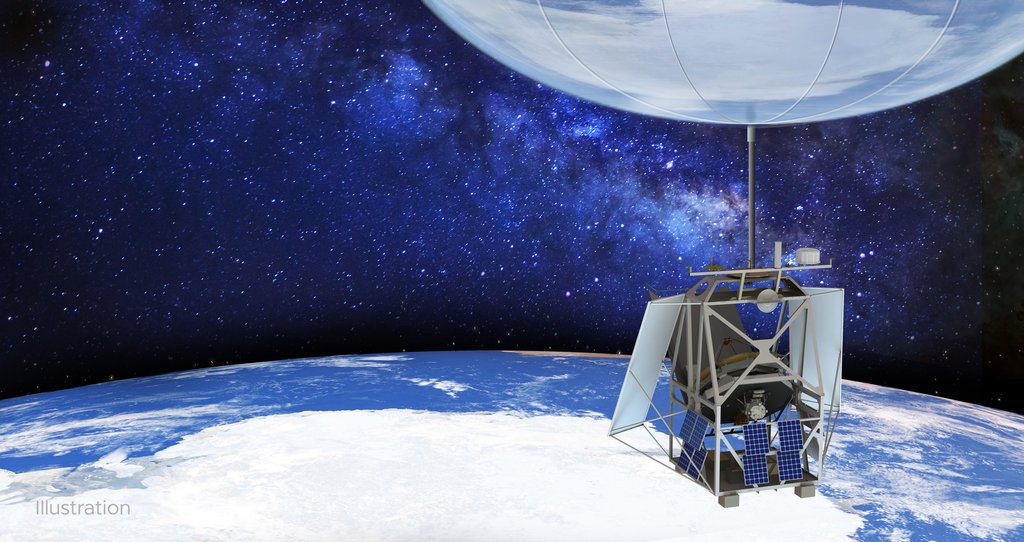 Lofted by a stratospheric balloon, as shown in this illustration, NASA’s ASTHROS mission may reach an altitude of 130,000 feet (40 kilometers). From that height, the telescope can detect wavelengths of light that are blocked by Earth’s atmosphere and cannot be observed from the ground. Credit: NASA/JPL-Caltech Full Image Details

“It’s difficult to explore feedback all the way from where it originates, at the scale of individual stars, to where it has an effect, on the scale of galaxies,” said Jorge Pineda, principal investigator for ASTHROS at JPL. “With a large mirror we can connect those two.”

NASA contracted Media Lario, an optics company in Italy, to design and produce ASTHROS’ full telescope unit, including a primary mirror, secondary mirror, and supporting structure (called the cradle). Media Lario previously developed a unique method for manufacturing lightweight infrared and optical telescope mirrors, which the company used to produce many of the panels for the primary mirrors of the Atacama Large Millimeter Array, a group of 66 ground-based telescopes in Chile.

The ASTHROS primary mirror features nine panels, which are significantly easier to fabricate than a one-piece mirror. The bulk of the mirror panels consist of lightweight aluminum, formed into a honeycomb structure that reduces its total mass. The panel surfaces are made of nickel and coated with gold, which improves the mirror’s reflectivity at far-infrared wavelengths.

Because the ASTHROS team won’t be able to fine-tune the alignment of the panels once the telescope lifts off, the cradle supporting the mirror needs to be lightweight yet exceptionally strong and rigid to prevent any deformation. Carbon fiber would do the trick. So, to build the cradle and other structural components, Media Lario turned to local companies in Italy that typically produce specialized structures for competitive racing boats and cars.

“I think this is probably the most complex telescope ever built for a high-altitude balloon mission,” said Jose Siles, the ASTHROS project manager at JPL. “We had specifications similar to a space telescope but on a tighter budget, schedule, and mass. We had to combine techniques from ground-based telescopes that observe in similar wavelengths with advanced manufacturing techniques used for professional racing sailboats. It’s pretty unique.”

Media Lario will deliver the full telescope unit to NASA in late July. After that, the ASTHROS team will integrate it with the gondola (the structure that holds the entire payload and attaches to the balloon) and other key components. Then they’ll begin a series of tests to ensure everything is ready for flight.

A division of Caltech in Pasadena, California, JPL manages the ASTHROS mission for the Astrophysics Division of NASA’s Science Mission Directorate in Washington. JPL is also building the mission’s scientific payload. The Johns Hopkins Applied Physics Laboratory in Laurel, Maryland, is developing the gondola and pointing systems. The payload cryocooler was developed by Lockheed Martin under NASA’s Advanced Cryocooler Technology Development Program. Other key partners include Arizona State University and the University of Miami. ASTHROS’ high-performance carbon fiber parts were produced by Persico Marine in Nembro, Italy, and Lamiflex S.p.A in Ponte Nossa, Italy.

NASA’s Scientific Balloon Program and its Columbia Science Balloon Facility in Palestine, Texas, will provide the balloon and launch services.

ASTHROS will be launched from NASA’s Long Duration Balloon Facility in Antarctica, near McMurdo Station. The station is managed by the National Science Foundation through the U.S. Antarctic Program.