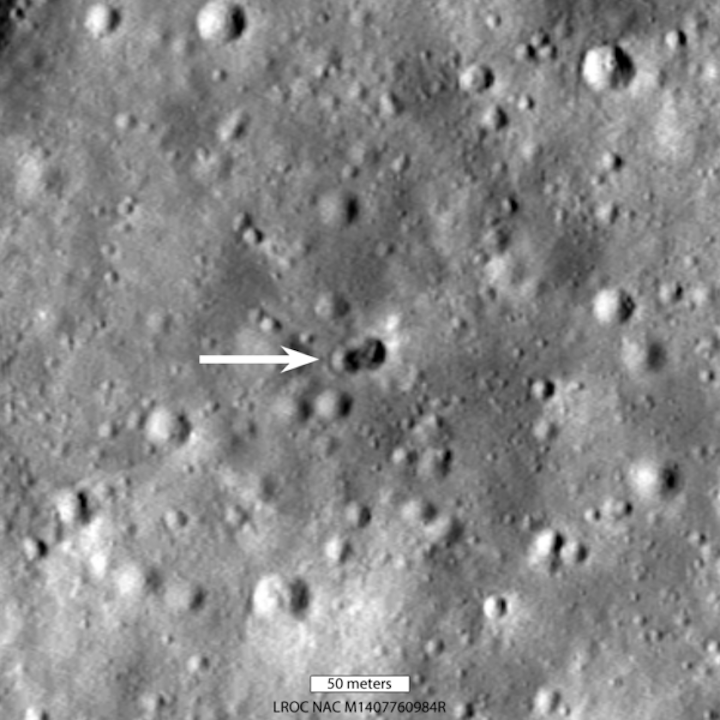 A recent lunar science mystery has provided an interesting result. After a months-long search, the Lunar Reconnaissance Orbiter mission team recently found a pair of new craters on the lunar farside, formed when an object hit the Moon on March 4, 2022. Observers had spotted the object on its moonbound trajectory, though the impact itself was of course out of Earth’s line of sight.

Exactly what the impactor was made for an intriguing tale. Initial calculations suggested it was the upper stage booster of a SpaceX Falcon 9 rocket, which launched the Deep Space Climate Observatory mission. But observers later refined the trajectory and identified the object as a Long March 3C upper stage from China’s Chang’e 5 T1 mission. Chang’e 5 T1 flew past the Moon in late 2014 to demonstrate capsule reentry ahead of the full Chang’e 5 lunar-sample return. To date, however, China has not confirmed that the object was related to the Chang’e 5 T1 mission.

ANATOMY OF AN IMPACT

The impactor was projected to hit the lunar surface around 7:26 a.m. EST / 12:26 UT on March 4th, near the large crater Hertzsprung on the lunar farside. The Lunar Reconnaissance Orbiter (LRO) team found the impact site about 8 kilometers (5 miles) from the expected impact site. This slight shift wasn’t unexpected, as solar-wind pressure can gently push on the empty rocket booster — basically a hollow cylinder — and alter its trajectory prior to impact.

“The actual impact location was uncertain, largely because our last observations were made about four weeks before impact,” says Bill Gray (Project Pluto), who had observed the object and compiled others’ observations. “After that, the object was too close to the Sun in the sky to be able to point a telescope at it.”

“We were fairly confident that the LRO crew would have to search a bit around our predicted impact sites,” Gray adds. “It’s a little farther off than either of us had expected, but not surprisingly so.”

What was unexpected was the double crater that resulted from the impact, 28 meters (92 feet) along its longest axis. An eastern crater (18 meters across) is superimposed on a western crater (16 meters).

Most of the mass from the 1.8-ton spent booster is expected to be located in the aft rocket motor end, but the double crater indicates that there was a large mass on both ends.

The LRO has found the impact sites of four Apollo SIV-B boosters. None of these resulted in double craters, though most were irregularly shaped. The maximum width of these Apollo-era craters is 29 meters across, right about the same size as the more recent impact.

LUNAR IMPACTS: PAST, PRESENT . . . AND FUTURE

Human-made material hitting the moon goes all the way back to the Soviet Union’s Luna 2 mission, which struck the Moon in the Sinus Lunicus region on September 13, 1959. Dozens of additional landings, hard and soft, continued over the next decade leading up to Apollo.

More recently, China has carried out a successful lunar-farside landing with the Chang’e 4 mission on January 3, 2019, while missions from Israel and India ended in crashes.

NASA has its own ambitions to return to the Moon this decade with the Artemis program. The first small step toward this goal comes with the launch of the Cislunar Autonomous Positioning System Technology Operations and Navigation Experiment (CAPSTONE), expected to occur June 28th at 5:50 a.m. EDT / 9:50 UT. CAPSTONE is a pathfinder mission for the eventual crewed Lunar Gateway station.

The Moon is about to become a busy place. More missions will also mean more hardware hitting the Moon in the years to come.