The small stratocumulus cloud has a complex origin story. 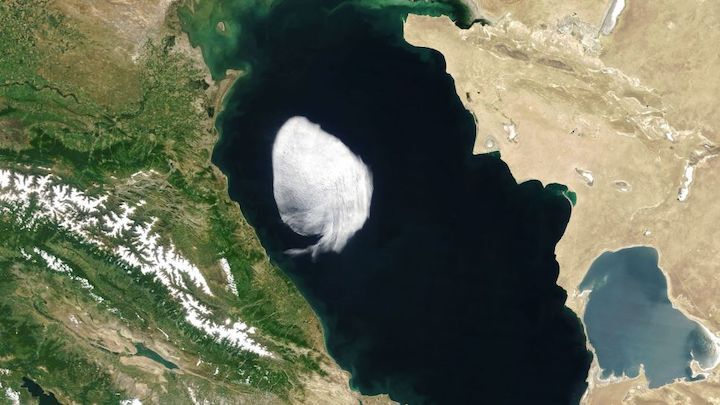 A "peculiar" cloud, as NASA terms it, was found over the Caspian Sea on May 28. The cloud offers an interesting case study of how satellites can detect such phenomena in Earth's atmosphere.

Scientists used NASA's Terra satellite to watch the cloud as it moved towards land and then dissipated in order to learn more about how small stratocumulus features like this one form.

Stratocumulus clouds tend to be clumped together at low altitudes in the atmosphere; this one was spotted at about 1,500 meters (5,000 feet) above Earth's surface. What made it really stand out in new images captured by Terra's Moderate Resolution Imaging Spectroradiometer (MODIS), however, was the cloud's hard boundary.

"Sharp edges are often formed when dry, warm air coming from land collides with colder moist air over the ocean, and the cloud forms at that boundary," Bastiaan van Diedenhoven, an atmospheric scientist at SRON Netherlands Institute for Space Research, said in a NASA statement(opens in new tab) posted June 16.

It's unusual to see this type of cloud in Eastern Europe, as opposed to over an ocean area, although its appearance could be explained by the Caspian Sea being the world's largest inland body of water. The sea is surrounded by countries such as Kazakhstan, Iran, Turkmenistan, Georgia and Azerbaijan, to name a few.

"You often see this [cloud type] off the west coast of Africa, but at much larger scales," van Diedenhoven added. He suggested the cloud could have formed when warmer, drier air that possibly came from the Balkans (the area around Greece) hit colder and moister air over the Caspian Sea.

The cloud began to dissipate in the hours after it was captured in the late morning over the Caspian. By the afternoon it had moved northwest over the sea to the coast of Russia, near Makhachkala at the foothills of the Caucasus Mountains. The cloud eventually dissipated completely as it moved over land.

Terra(opens in new tab) is an extremely long-running Earth observation mission, having launched in December 1999 and continuing to operate in good health as it approaches the quarter-century mark in space.

The benefit of long missions like Terra is they allow researchers to track changes in the Earth's environment using the same sensors, allowing for measurement consistency. That said, NASA and the National Oceanic Atmospheric Administration (NOAA) do send new satellites aloft to capture different types of measurements ⁠— and to serve as a bit of redundancy for older missions.

Earlier in the year, NASA's science and Earth science lead, Katherine Calvin, said the agency is working on a more comprehensive plan to refresh its fleet of older satellites, like Terra. Other examples of older operational missions include Aqua (launched in 2002) and Aura (2004).