Scientists using data from NASA’s Curiosity rover measured the total organic carbon – a key component in the molecules of life – in Martian rocks for the first time.

“Total organic carbon is one of several measurements [or indices] that help us understand how much material is available as feedstock for prebiotic chemistry and potentially biology,” said Jennifer Stern of NASA’s Goddard Space Flight Center in Greenbelt, Maryland. “We found at least 200 to 273 parts per million of organic carbon. This is comparable to or even more than the amount found in rocks in very low-life places on Earth, such as parts of the Atacama Desert in South America, and more than has been detected in Mars meteorites.”

Organic carbon is carbon bound to a hydrogen atom. It is the basis for organic molecules, which are created and used by all known forms of life. However, organic carbon on Mars does not prove the existence of life there because it can also come from non-living sources, such as meteorites and volcanoes, or be formed in place by surface reactions. Organic carbon has been found on Mars before, but prior measurements only produced information on particular compounds, or represented measurements capturing just a portion of the carbon in the rocks. The new measurement gives the total amount of organic carbon in these rocks.

Although the surface of Mars is inhospitable for life now, there is evidence that billions of years ago the climate was more Earth-like, with a thicker atmosphere and liquid water that flowed into rivers and seas. Since liquid water is necessary for life as we understand it, scientists think Martian life, if it ever evolved, could have been sustained by key ingredients such as organic carbon, if present in sufficient amount.

Curiosity is advancing the field of astrobiology by investigating Mars’ habitability, studying its climate and geology. The rover drilled samples from 3.5-billion-year-old mudstone rocks in the Yellowknife Bay formation of Gale crater, the site of an ancient lake on Mars. Mudstone at Gale crater was formed as very fine sediment (from physical and chemical weathering of volcanic rocks) in water settled on the bottom of a lake and was buried. Organic carbon was part of this material and got incorporated into the mudstone. Besides liquid water and organic carbon, Gale crater had other conditions conducive to life, such as chemical energy sources, low acidity, and other elements essential for biology, such as oxygen, nitrogen, and sulfur. “Basically, this location would have offered a habitable environment for life, if it ever was present,” said Stern, lead author of a paper about this research published June 27 in the Proceedings of the National Academy of Sciences. 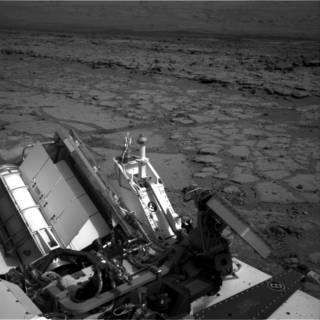 The NASA Mars rover Curiosity used its left Navigation Camera to record this view of the step down into a shallow depression called "Yellowknife Bay." It took the image on the 125th Martian day, or sol, of the mission (Dec. 12, 2012), just after finishing that sol's drive.
Credits: NASA/JPL-Caltech
Full caption

To make the measurement, Curiosity delivered the sample to its Sample Analysis at Mars (SAM) instrument, where an oven heated the powdered rock to progressively higher temperatures. This experiment used oxygen and heat to convert the organic carbon to carbon dioxide (CO2), the amount of which is measured to get the amount of organic carbon in the rocks. Adding oxygen and heat allows the carbon molecules to break apart and react carbon with oxygen to make CO2. Some carbon is locked up in minerals, so the oven heats the sample to very high temperatures to decompose those minerals and release the carbon to convert it to CO2. The experiment was performed in 2014 but required years of analysis to understand the data and put the results in context of the mission’s other discoveries at Gale Crater. The resource-intensive experiment was performed only once during Curiosity’s 10 years on Mars.

This process also allowed SAM to measure the carbon isotope ratios, which help to understand the source of the carbon. Isotopes are versions of an element with slightly different weights (masses) due to the presence of one or more extra neutrons in the center (nucleus) of their atoms. For example, Carbon-12 has six neutrons while the heavier Carbon-13 has seven neutrons. Since heavier isotopes tend to react a bit more slowly than lighter isotopes, the carbon from life is richer in Carbon-12. “In this case, the isotopic composition can really only tell us what portion of the total carbon is organic carbon and what portion is mineral carbon,” said Stern. “While biology cannot be completely ruled out, isotopes cannot really be used to support a biological origin for this carbon, either, because the range overlaps with igneous (volcanic) carbon and meteoritic organic material, which are most likely to be the source of this organic carbon.”