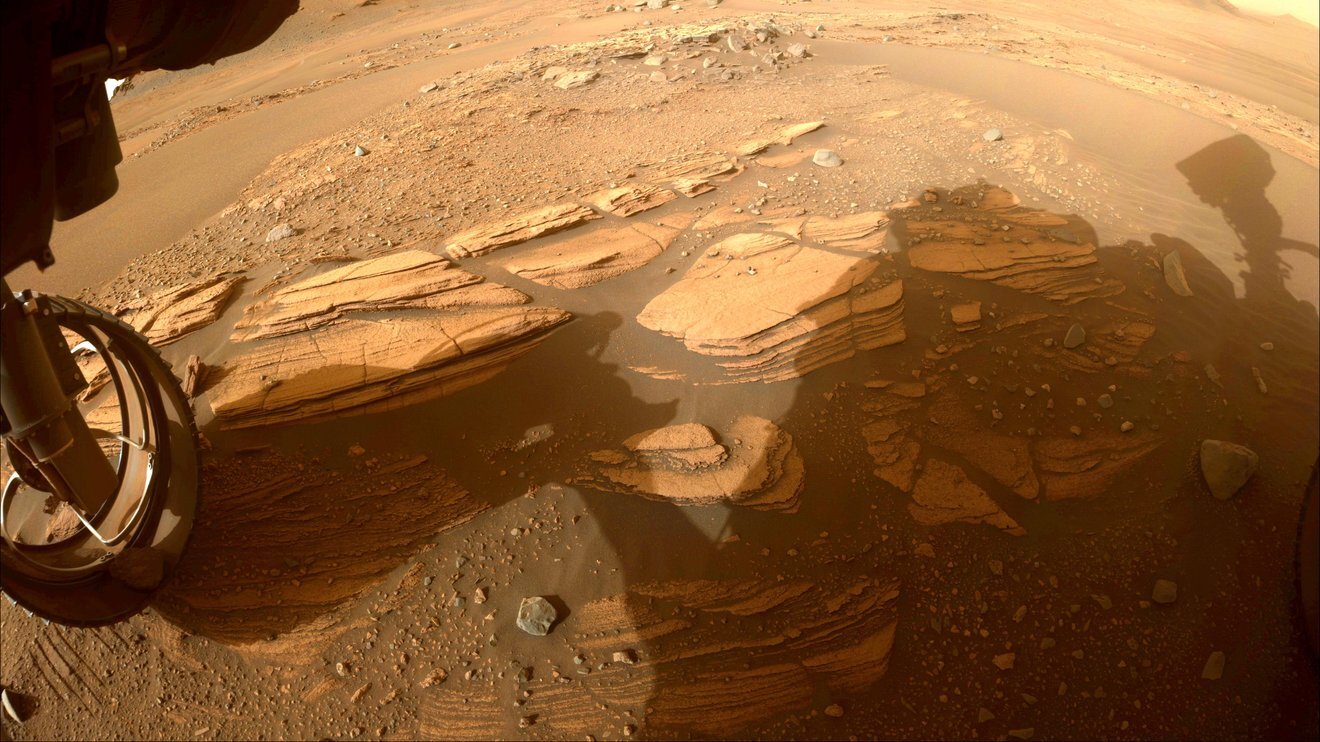 This image of the sedimentary rocks of Enchanted Lake was taken by one of the Perseverance rover's Hazard Avoidance Cameras (Hazcams) near the base of Jezero Crater's delta on April 30, 2022.

Not even Obi-Wan Kenobi could convince Perseverance’s Katie Stack Morgan that these are not the rocks she’s looking for.

Ask any space explorer, and they’ll have a favorite photograph or two from their mission. For Katie Stack Morgan, the deputy project scientist for NASA’s Perseverance Mars rover, the first close-up image of layered rocks at the base of Jezero Crater’s ancient river delta holds a special place in her heart. The image of the “Enchanted Lake” rocky outcrop, informally named after a landmark in Alaska’s Katmai National Park and Preserve, was taken by one of the rover’s Hazard Avoidance Cameras (Hazcams) on April 30, 2022.

A massive fan-shaped collection of rocks and sediment at the western edge of Jezero Crater, the delta formed at the convergence of a Martian river and a crater lake billions of years ago. Exploring this delta has been on Stack Morgan and the rest of the Perseverance science team’s wish list because they believe the location provides one of the mission’s best opportunities to find rocks that could have preserved remnants of ancient microbial life – a primary goal of the mission.

“Hazcam images are mainly used by the mission’s engineers to assist with driving and placement of the rover’s arm,” said Stack Morgan. “But when I saw the Hazcam image of Enchanted Lake, it was love at first sight. This image provided our first up-close glimpse of sedimentary rocks – the ones I’ve been most eager to explore since Jezero was named the landing site for Perseverance nearly four years ago.”

Rocks and Signs of Past Life

To best understand why this image of Perseverance’s first close encounter with a sedimentary rock is such a kick for Stack Morgan, it helps to go back to the beginning of the rover’s exploration of Mars. After Perseverance landed Feb. 18, 2021, on the flat, rocky plains that make up the floor of Jezero Crater, it spent more than a year studying outcrops, boulders, and regolith (broken rock and dust) in the area, gathering samples along the way.

One of the science team’s big takeaways from that effort: The rocks of the crater floor are igneous in origin, having formed billions of years ago from molten rock that cooled either underground or after volcanic eruptions. Igneous rocks can offer a great deal of information about the interior of Mars and the age of geologic features. What’s more, the team found evidence that the igneous rocks interacted with water and could have once hosted habitable microenvironments.

But, as Stack Morgan notes, the screaming-hot pressure-cooker conditions that produce igneous rocks don’t usually provide the optimal environment for preserving evidence of fossilized microscopic life. On the other hand, sedimentary rocks – like those that dominate the Jezero delta – provide an ideal site to look for signs of past life.

Over time, mud, silt, and sand brought into the lake that filled Jezero compressed and solidified into thin layers of sedimentary rock. If microscopic organisms were also present during sedimentary rock formation, they could have been captured within the layers, frozen in time as fossilized lifeforms.

Could Enchanted Lake’s layered rocks contain evidence that Mars once was home to microscopic life? Maybe. However, such a monumental determination will probably have to wait for the samples that Perseverance is gathering in special tubes to be brought to Earth and analyzed with powerful lab equipment too large to bring to Mars. And while NASA’s planned Mars Sample Return Campaign is scheduled to carry around 30 tubes back to Earth, NASA has to be selective about what goes inside them.

“Enchanted Lake was our first close encounter with sedimentary rocks in Jezero, but we’re going to do what rover missions do best – look around, drive, and then look some more. Even if we find other targets in the delta to sample, I will always have a special place in my heart for the rocks that showed me that we sent the rover to the right place,” Stack Morgan said.

Perseverance is parked about halfway up the delta in a field of sedimentary rocks the science team calls “Hogwallow Flats.” Over the next several weeks, the rover will analyze – and perhaps sample – one or more rocks in the area. Then, the team will decide whether to return to Enchanted Lake or explore other exciting outcrops of the Jezero delta.

A key objective for Perseverance’s mission on Mars is astrobiology, including the search for signs of ancient microbial life. The rover will characterize the planet’s geology and past climate, pave the way for human exploration of the Red Planet, and be the first mission to collect and cache Martian rock and regolith.

Subsequent NASA missions, in cooperation with ESA (European Space Agency), would send spacecraft to Mars to collect these sealed samples from the surface and return them to Earth for in-depth analysis.

The Mars 2020 Perseverance mission is part of NASA’s Moon to Mars exploration approach, which includes Artemis missions to the Moon that will help prepare for human exploration of the Red Planet.

JPL, which is managed for NASA by Caltech in Pasadena, California, built and manages operations of the Perseverance rover.